The world’s most futuristic bars

While some bar owners are retreating into the past opening 1920s-style speakeasies, others are pushing into the future dreaming up bars that embrace cutting-edge technology.

Propping up at a bar and ordering your gin & tonic from a well-trained bartender might be the conventional way of navigating a bar. But what if you could control your order at the touch of a button, sip a martini in a moveable glass cube or play the stock market while enjoying a craft beer? 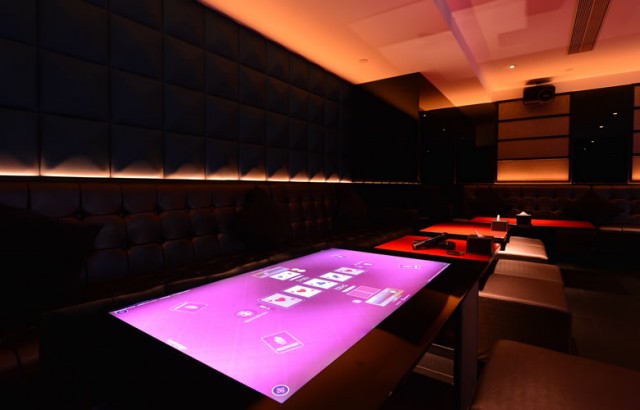 This Hong Kong karaoke chain opened in 2010 setting the bar for the popular past time by combining it with a bevy of high-tech gadgetry. The bar uses touch screen Microsoft Surface tables from which guests are able to order their drinks, food and song selection. It can also like tell you what drink you are having when you set your glass down on the table and entertain you with pre-loaded games like Chinese dice against your neighbours. 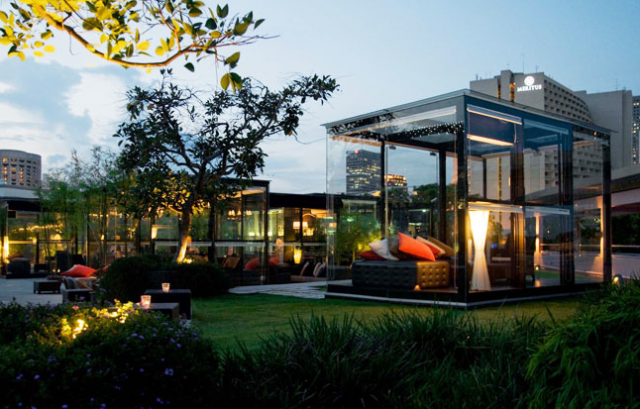 Inspired by the science of organic chemistry, bartenders at Orgo treat the creation of every drink as “not only an art, but also a science”. Headed by Japanese mixologist, Tomoyuki Kitazoe, the bar boasts futuristic glass cubes described as “shape-shifting modular structures” with 360 degree views of Marina Bay. Cocktails include the chocolate martini, with one variation made with wasabi salt. 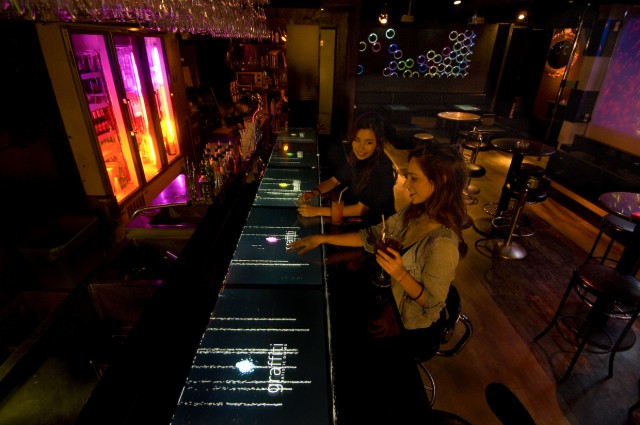 Tokyo’s Graffiti Bar offers what it calls “artistic dining” boasting one of the largest multi touch display installations from which guests can flip through its menu, order, play games and create virtual graffiti on its interactive screens, as seen below. 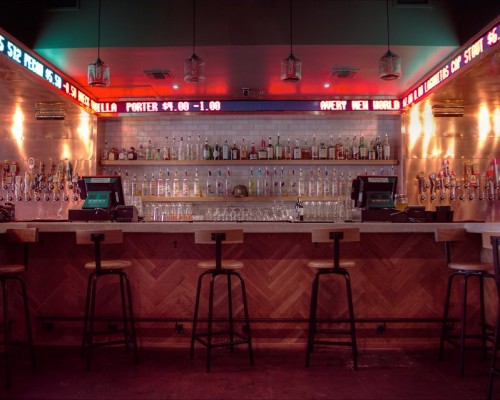 Described as “Wall Street meets West Sixth Street”, The Brew Exchange offers 100 beers on tap, the prices of which continually fluctuate transforming your drinking experience into a ride on the stock market. Prices are based on supply and demand and divided into categories with the price going up each time someone orders a beer. At the same time, the prices of other beers in the category go down. The more popular a beer is, the higher the price goes, while those not being ordered continue to fall. Patrons can watch the prices rise and fall in real time via a 1960’s style ticker that runs above the bar. The prices of staple beers including Miller Lite, Bud Light or Lone Star stay the same. 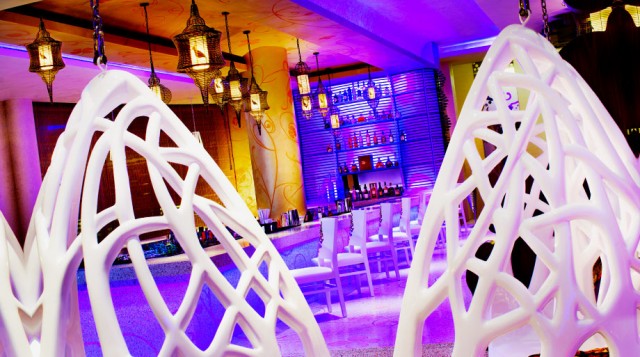 Bathed in purple light scattered with cocoon-like webbed chairs, W Hotel’s futuristic Woobar works to maintain an “urban jungle aesthetic”. In the afternoon, it serves high tea favourites in a standing bird cage. In the evening, guests can enjoy bespoke cocktails crafted with herbs from its garden while being entertained by DJs. 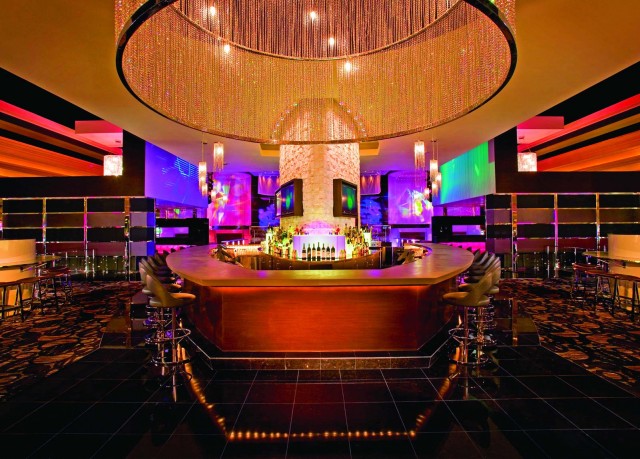 Based in Las Vegas, the home of extravagance, excess and spectacular light displays, it’s not surprising to find a bar such as the EyeCandy Sound Lounge. Nestled in the heart of the Mandalay Bay Hotel’s Casino floor, it boasts a high-tech sound system and interactive touch tables that allow guests to create and project images and messages onto the venue’s various big screens. Cocktails are overseen by renowned mixologist Tony Abou-Ganim’s, who has more than three decades of experience in the trade. 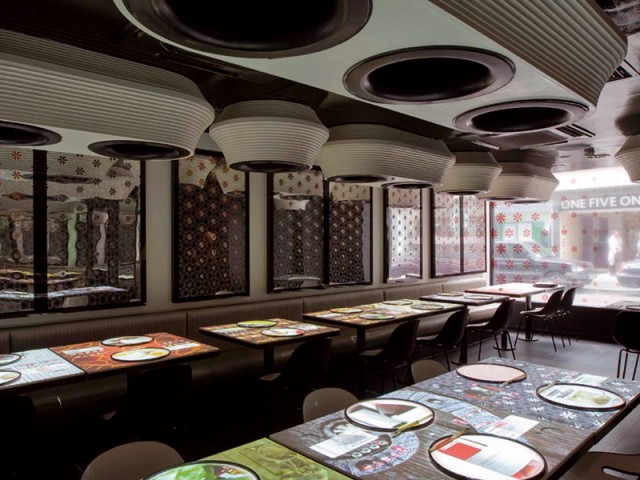 Located in London’s trendy Soho, Inamo is an oriental fusion restaurant that serves up dishes influenced by Japanese, Chinese, Thai and Korean cuisine, with a technological twist. Diners are able to place their orders via an illustrated food and drinks menu that is projected onto their table. 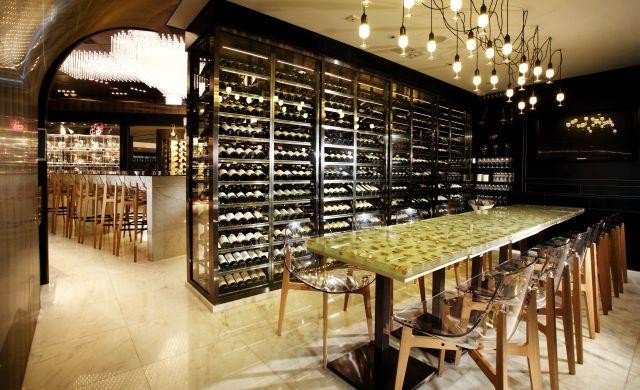 Amo Eno allows guests to pick their wine selection from interactive touch screen tables, which are then dispensed from enomatic self-serving machines. The touch screen tables also allow guests to share their experiences of each wine. “The state-of-the-art interiors exude a futuristic vibe. The interactive touchscreen table tops act as virtual sommeliers for amateurs looking for the ultimate experience”, its website promises. 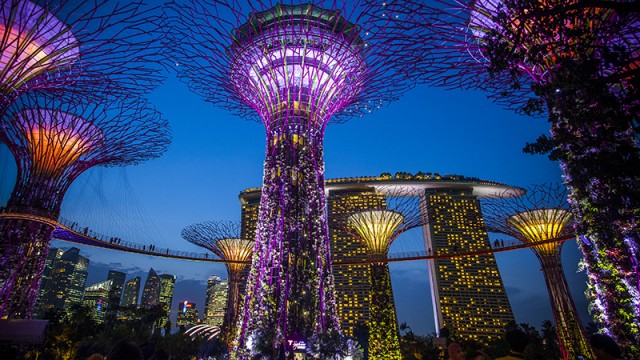 Looking more like a spaceship than a bar, SuperTree by IndoChine is perched high atop the imposing SuperTree Grove and is undoubtedly a unique spot to sip a martini while surveying Singapore’s Marina Bay. After dark the bar’s revolving alfresco rooftop bar is lit up creating a stunning neon light display. Guests can enjoy dishes which take inspiration from Indochinese, western, and fusion dishes and a range of beverages including premium sake and Baijiu.