UK beer sales are expected to end five consecutive years of decline by the end of 2014, although cider looks set to lose its recent buoyant momentum. 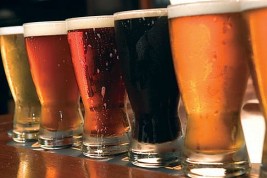 New research from Mintel anticipates a 1.3% uplift in UK beer volumes to reach around 4.24 billion litres for 2014. This marks a positive turnaround for the sector, which saw sales fall by more than 500 million litres between 2009 and 2013 alone.

Category leader lager is emerging as the main driver of this growth, with sales up by around 1.7% in the last year to reach a predicted 3.17bn litres. The craft movement has helped to boost the ale sector, which is set to add around 6m litres this year, although stout sales continue to decline.

Analysing the cause of this overall revival of fortunes, Mintel senior drinks analyst Chris Wisson commented: “Pressures on household finances, health concerns and competition from other markets have led to significant volume sales decline over the past five years for the beer market.

“However,” he continued, “2014 has seen volume sales finally bounce back into growth, buoyed by a warm summer and the football World Cup. Whilst much of the market’s recent value growth has been driven by inflation and the now-defunct beer tax escalator, successive 1p cuts on the tax on pints and the slowdown in the cider market bode well for beer’s improving fortunes.”

Despite the recent proliferation of flavoured ciders, whose value sales rose by just over one third this year, the category as a whole is expected to see volumes dip by around 0.8% in 2014 to 949 million litres. This marks a contrast with the last few years, which saw cider sales increase by 10% in 2012 and 6% in 2013.

In order to counterbalance the effect of this slowdown, a number of the UK’s biggest cider producers have been channeling efforts into the development of export markets such as the US, where cider off-trade sales rose by 94% last year.

Drawing a link between cider’s decline and the uplift in beer, Wisson suggested: “Some of cider’s momentum appears to have been lost to a rejuvenated beer category, which is seeing strong growth from various segments such as craft and world/global beers.”