As this week marks the 100th anniversary of the outbreak of World War One, here we assemble five famous drinks associated with the conflict.

It was Arnold Zweig, German anti-fascist writer and WW1 volunteer, who said that it was possible for a man to fight a war “without women, without ammunition, even without strongpoints, but not without tobacco and not at all without alcohol.”

Forces on both sides of the war appreciated this fact: for the maintenance of troop moral, alcohol had an important part to play.

And beyond the tenches, the social and cultural impact of the war would sound the beginning of the 20th Century, and with that, the cocktail boom that would help to define the inter-war years in Europe.

So, from the trenches of three of the major protagonists and two cocktail innovations that are enjoyed to this day, we have assembled the top five drinks associated with the Great War.

‘Father Pinard’ in the French trenches 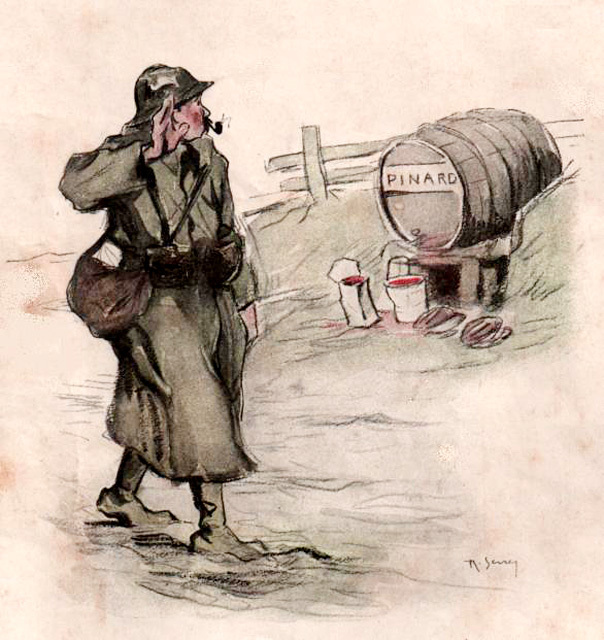 A mainstay of the French forces during the conflict was the insurmountable ‘Father Pinard‘, a wine of national unity that was looked upon affectionately by the troops – but not, however, for its taste.

When France went to war in 1914, troops were only issued water, but the army quickly began issuing a daily wine ration as early as September 1914.

This consisted of Pinard (a word whose english equivalent would be “plonk”), which was a low-quality red wine. Generally, soliders were issued with ½ liter of Pinard per day, but this could fluctuate depending on the logistical situation.

Soldiers were sometimes issued beer, cider, or brandy in lieu of Pinard, but it remained the most common alcoholic drink consumed at the front.

On special occasions, other drinks like spiced wine or sparkling wine would be issued. Pinard was sometimes mixed with brandy; some reports mention it even being mixed with ether.

Better quality wine, Cognac, and other brandies were also widely available behind the lines, particularly in cafés and brothels catering to soldiers.

Schnapps and the German Trenches

Besides the looting of wineries as German troops advanced into eastern France at the beginning of the war, the Germans enjoyed a varied assortment of alcohol rations, ranging from small measures of beer, German wine, brandy and, most famously, schnapps.

The daily schnapps rations of 125ml enjoyed by many of the German forces played a pivotal role in defining the War in the German psyche, especially from those who went on to write on their experiences of the conflict.

During the 1920s, Erich Maria Remarque, author of the seminal All Quiet on the Western Front, wrote lovingly about schnapps, saying, “It is easier to write about the psychology of women than to understand schnapps; schnapps has soul.”

The Rum Ration and the British Trenches

With an anti-alcohol drive picking up pace back home, British policy concerning alcohol in the trenches was more conservative than that of their French allies, who issued wine as a matter of routine to their frontline soldiers.

However, soldiers of the British Commonwealth were given a daily rum ration that is now embedded in wartime folklore.

The ration of thick, dark rum was 1/16th of a pint per man, or a quarter-gill, per day.

The British Army in World War I also consisted of troops from throughout the British Empire. Troops from Canada, Ireland, India, Australia, New Zealand, South Africa, and elsewhere all served on the Western Front.

They would have been issued the rum ration and subject to the same regulations as their counterparts from the British Home Islands. Muslim soldiers from Britain’s imperial territories would have been the main exception to the near-universal rum ration.

The rum ration was generally issued once per morning, although some sources mention it being doled out more frequently, especially when attacks were imminent or if heavy casualties increased the availability of rum.

This was done at the daily “stand-to” (at stand-to, soldiers would man their forward positions in the trenches at dawn in case of an enemy attack) every morning and then continued throughout the war even when the practice of “standing to” fell out of necessity.

Rum was also routinely administered to the wounded and dying, as seen in Edmund Blunden’s Pillbox:

“The poor man lay at length and brief and mad
Flung out his cry of doom; soon ebbed and dumb
He yielded. Worley with a tot of rum
And shouting in his face could not restore him.
The ship of Charon over channel bore him.
All marvelled even on that most deathly day
To see this life so spirited away.”

There was also a popular trench song, Old Barbed Wire, which features a stanza jokingly accusing the soldiers’ superiors of hoarding their rum supplies:

The exact origin of the Sidecar is unclear, but it is thought to have been invented around the end of World War I in either London or Paris.

The Ritz Hotel in Paris claims origin of the drink, with the first written recipes for the Sidecar appearing in 1922, in Harry MacElhone’s Harry’s ABC of Mixing Cocktails and Robert Vermeire’s Cocktails and How to Mix Them. It is one of six basic drinks listed in David A. Embury’s The Fine Art of Mixing Drinks (1948).

Embury credits the invention of the drink to an American Army captain in Paris during World War I “and named after the motorcycle sidecar in which the good captain was driven to and from the little bistro where the drink was born and christened”. Apparently the Sidecar became famous in Harry’s Bar in Paris.

In early editions of MacElhone’s book, he cites the inventor as Pat MacGarry, “the Popular bar-tender at Buck’s Club, London”, but in later editions he cites himself. Vermiere states, “This cocktail is very popular in France. It was first introduced in London by MacGarry, the celebrated bar-tender of Buck’s Club.”

Both MacElhone and Vermiere state the recipe as equal parts Cognac, Cointreau, and lemon juice, now known as “the French school”. Later, an “English school” of Sidecars emerged, as found in the Savoy Cocktail Book (1930), which call for two parts Cognac and one part each of Cointreau and lemon juice.

Like the backgrounds of many cocktails, the French 75 divides the opinion of cocktail historians to this day.

A combination of gin, Champagne, citrus and sugar, one school of thought suggests that it was named in 1925 by the famous Harry MacElhone at his namesake saloon Harry’s American Bar in Paris.

The inspiration for the title was apparently as a tribute to the 75mm Howitzer field gun that the French and Americans used throughout World War One. The gun was a renowned piece of machinery praised for its accuracy and quickness, and the French 75 was said to have such a kick that if felt like being shelled by the famous weapon.

Gin was often replaced by other spirits like Tequila, Cognac or vodka; in fact nearly any other spirit will have probably been blended at some point with Champagne, but Cognac is the most popular variation.

It was not in the 1920’s that a concoction of gin and champagne first came to be mixed together. In the 19th Century there is evidence to suggest that a very similar precursor to the French 75 was enjoyed by Charles Dickens and the Prince of Wales.

And finally… A word on Benedictine and the Accrington Pals 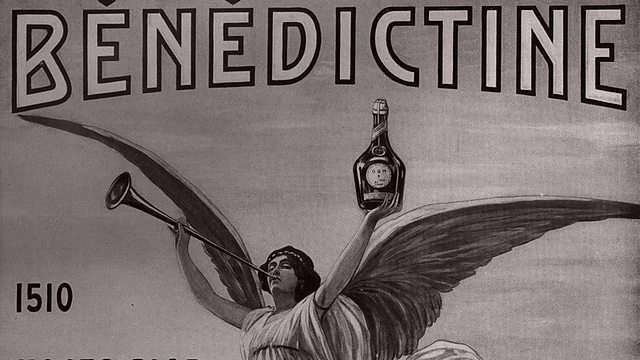 After a suggestion by reader of ours, we must mention the tale of the Accrington Pals, and how a working men’s club in northern England is reportedly the biggest drinker of Benedictine in the world.

The area of England which includes Accrington, Blackburn and Burnley drink more of the stuff than anywhere outside France.

The connection dates from the days following the end of the First World War, when the 11th (Service) Battalion, East Lancashire Regiment – better known as the famous Accrington Pals – was based in the Le Havre, Harfleur and Fecamp area, close to the Benectine Abbey which produces the liqueur, from June to October 1919.

The Armistice on 11 November 1918 found the Accrington Pals move back through Belgium and France to a dispatching camp at Harfleur (now a suburb of Le Havre) on 25 June 1919. This, as the name implies, was a base from which men went to England for demobilisation.

Both those awaiting demobilisation, and men newly posted in to the camp, spent their time on route marches, lectures, football and cricket. There was also plenty of free time – time to sight-see, and to dine and drink in the cafes and bars in the area.

The town and port of Fecamp is just over 20 miles from Harfleur. A particular attraction of the town is Le Palais Benedictine, a huge neo-Gothic building in the town centre. Le Palais had produced Benedictine since 1863. It is possible that, in 1919, parties of the Pals visited the distillery. What is more certain is that Benedictine was sold in every café and bar in Harfleur and Le Havre.

Men whose physical condition had suffered in years of fighting, or were still recuperating from wounds and sickness, all agreed that “a Bene” had medicinal properties and a fortifying effect. The liqueur rapidly became the Pals favourite tipple. So when they returned home to East Lancashire, it was inevitable that they began to ask for “a Bene.”

Such was the demand for the drink that sales in East Lancashire soon amounted to most of the sales in Britain, and so it has continued to this day.