Sauvignon Blanc is undoubtedly one of the biggest success stories for the wine industry in recent years. While Sancerre has long been a staple of fridges and wine lists around the world, the vivacious, aromatic expressions unleashed by the New World in particular have catapulted this grape variety to a whole new level of consumer awareness. 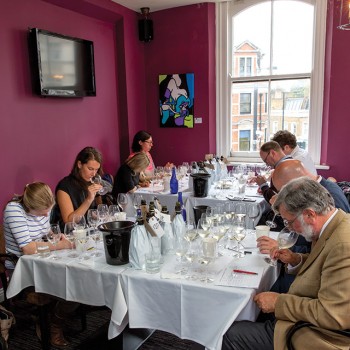 The latest report to July 2014 from the Wine & Spirits Trade Association shows that, in the UK at least, Sauvignon Blanc remains on a firm upward trajectory. What’s more, commanding a well above average off-trade retail price of £6.08 per 75cl bottle (compared to £5.27 for Chardonnay), this is far more than just a volume driver.

As such, Sauvignon Blanc represented an obvious candidate for the latest extension to The Drinks Business Global Masters Series. What’s more, with no fewer than 17 different countries represented among the medallists, the blind tasting format flagged up both the high quality and truly international offer from this grape variety today.

• The Global Sauvignon Blanc Masters is a competition created and run by the drinks business, and is an extension of its successful Global Masters series for major international varieties such as Cabernet Sauvignon, Chardonnay and Pinot Noir.• With Sauvignon Blanc entries from around the world, in total nearly 150 wines were judged blind by a group of Masters of Wine and senior buyers

This diversity of origin extended right up to the very highest medal categories. While New Zealand scooped a predictably large proportion of gold medals awarded, it shared this podium with Spain, France, Australia, South Africa, Chile and the US. Meanwhile it was a Sauvignon Blanc from Spain – hardly the first place most people would associate with this grape – that took home the only Master of the competition.

Regardless of origin, the judges offered a clear view of what they look for from Sauvignon Blanc. “It needs to be alive, tight and mouth-watering,” summed up Sarah Knowles, buyer for The Wine Society. Expanding on this view, Clive Barlow MW, director of merchant and consultancy business Press Wine Services, remarked: “There always needs to be harmony between crisp acidity and fruit, whatever that fruit style may be.” Despite the proliferation of Sauvignon Blanc in the marketplace, he also warned: “It’s not a forgiving variety. You’ve got to be careful or you can lose some aromatics.”

As the discussion developed, there was an acknowledgement of the significant impact that one country in particular has had on this variety’s profile. “New Zealand has been so successful it’s shaped the market,” remarked Barlow. However, he stopped short of suggesting that competitors need to pursue this country’s trademark highly aromatic expression in order to succeed. Rather, he continued, “New Zealand raised the profile of the variety. It made people realise there’s more out there and maybe helped to break that Pinot Grigio stranglehold.” In particular Barlow pointed to the boost this raised awareness has given to the Loire. “People know it’s not the New Zealand style but they’re still happy to buy it,” he reported. “New Zealand has moved people towards a grape that they might not otherwise have tried. The Loire is still the home of Sauvignon Blanc and sells really well.”

Despite the success of these two regions, for those in search of a bargain, Laithwaites’ global buyer & winemaker Robin Langton waved the flag for a completely different corner of the world. “New Zealand is still the category leader but Chile is better value for money,” he insisted. “Under £10 Chilean Sauvignon Blanc over-delivers quality to price.” For all this area of strength, that was not to suggest that the country should restrict its focus to the entry level. While Langton praised Leyda as offering “benchmark” expressions of Sauvignon Blanc, the competition also threw up a pleasant discovery for presenter and consultant Sam Caporn MW: “One real surprise was a 2006 Sauvignon from Chile that had passed the test of time really very well,” she reported.

If there was one particular area of contention among the judges, it was the issue of using oak to vinify Sauvignon Blanc. Described as “a car crash” by Hugo Rose MW, chairman of the Wine Investment Association, others offered a more nuanced view. “Undoubtedly there are some great oaked Sauvignon Blancs around the world,” commented Knowles. “When it’s done well it’s great, but when done badly then it’s the worst wine in the bottle. There’s no middle ground.” For Langton, this approach to Sauvignon Blanc requires intelligent handling by the producer. “It’s about winemakers trying to take the wine somewhere other than just tank-fermented and clean,” he observed, but warned that with a variety as “unforgiving” as Sauvignon Blanc, “if you’re going somewhere else it’s easy to overdo it.” Above all, Langton maintained: “As soon as you use new oak the aromatics almost fight each other.” One enthusiastic advocate of barrels for this variety was Caporn. “I really liked the oaked styles,” she declared. “When done well it adds a layer of complexity and interest that is otherwise quite hard to find in Sauvignon Blanc.”

This connection between oak and more ambitious expressions of Sauvignon Blanc led naturally to a debate about the appeal of this variety once you venture up above the £10 or even £20 mark.

It may command a higher than average price point in the UK but, with a few notable exceptions, Sauvignon Blanc is rarely viewed as being in the same aristocratic league as Riesling or Chardonnay. Nevertheless, there were plenty of examples reaching right up to the
£30 mark that won acclaim from the judges, although there was a general consensus that Sauvignon Blanc’s natural comfort zone lies below £20. “The most impressive category in my view was £10- £20,” remarked Rebecca Palmer, associate director and buyer for Corney & Barrow. “This is the range that seemed to offer the best quality and value on the style catwalk, with wines that spanned the spectrum from exuberant, self-assured Kiwis to the more restrained and savoury.” By contrast, she found that when venturing above the £20 mark “some were simply too full- bodied to do the variety any favours.”

For Caporn, “you get what you pay for if you spend over a tenner as you get deeper concentration, better flavours, length and complexity.” However, at the very top end she echoed Palmer’s view, suggesting: “Over £20 it was harder to see the value and a couple of wines were actually penalised for that.” Nevertheless, while the £10-£20 price bracket proved a particularly prolific source of top medals, the healthy cohort of £20-£30 gold medal winners indicated both strong interest from winemakers in making these upmarket styles and the qualitative success of many such endeavours when sensitively handled.

One final area of discussion centred on the handful of blended Sauvignon Blanc entries. There was particular enthusiasm for the results when this variety is combined with Semillon, as demonstrated so prominently by Bordeaux and Margaret River in particular. “Semillon gives you that breadth on the palate,” noted Langton as he considered the merits of this combination. However, for the moment at least, Knowles described the Sauvignon/Semillon blend as “very difficult to sell.”

Even if this style remains something of a trade secret for now, with Sauvignon Blanc’s star shining so brightly at the moment winemakers around the world have plenty of incentive to continue refining their product and pushing boundaries. Of course, many consumers will undoubtedly remain content to lap up the cheaper, crowd-pleasing expressions that occupy such a vast expanse of shelf space. However, it is reassuring to know that there are plenty of rewarding options for those who choose to explore further up the price ladder.