Crisis looms if Bordeaux fails with 2014

Liv-ex director James Miles has delivered a stark warning to Château-owners in the run-up to next year’s en primeur. Will the region see sense in 2014, or kill the golden goose? 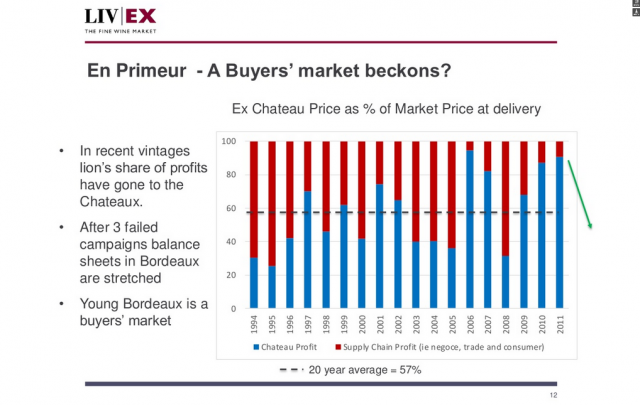 “A well-priced 2014 vintage is a vital precursor to any kind of sustained recovery,” Miles, told delegates at the recent Wine Industry Conference in Hong Kong.

“There are some tentative signs the market is recovering, but if it is going to have to absorb another loss-making Bordeaux en primeur vintage, there’s a very real risk of a very extended crisis,” he told the drinks business.

“What’s interesting is the cycles in Bordeaux tend to begin and end with good and bad en primeur campaigns. While external events are incredibly important, these boom and busts tend to be self-inflicted.”

Aware that the négociant system may have helped cushion château-owners from reality, he added: “It may well take a 1970s-style disaster when almost all the négociants went bankrupt before the châteaux woke up. The problem is this would release a lot of distressed stock onto the market which would depress the en primeur price.”

“In too many recent campaigns,” Miles told Hong Kong delegates, pointing to the chart (above), “the lion’s share of the profits has gone to the châteaux: from 2010 onwards 90% or more, which clearly leaves very little on the table for anybody else. In my mind, after three – arguably four – failed campaigns, 2014 just has to work and prices will have to fall further than many in Bordeaux currently appreciate.”

“When Seely says he’s never going to cut the price of Pichon Baron below 2013, it’s just disingenuous as the market has fallen 10 to 15% since the last vintage,” Miles added, referring to comments by AXA Millésimes MD, in db this April.

His parting message to Bordeaux: “You can take your money today, and pay a big price for it tomorrow. It’s a case of whether they want to kill the golden goose?”