A UK brewery has issued a grovelling albeit tongue-in-cheek apology to the Champagne Bureau, the French body entrusted with protecting the term Champagne, after releasing a “Champagne-style” sparkling beer. 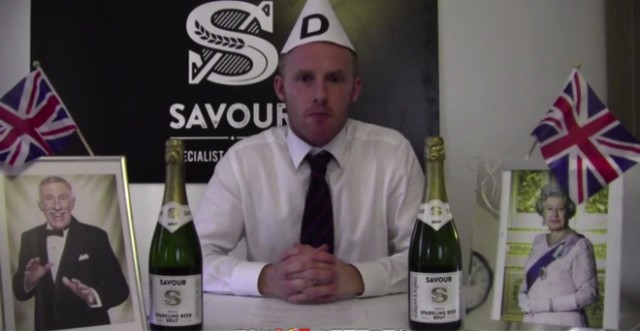 Savour Beer, based in Windsor, teamed up with Bolney Wine Estate earlier this year to brew a 10.5% abv Belgian-style golden ale using the “méthode champenoise” to create a sparkling beer, describing it as a “Champagne-style” beer.

However its use of the term sparked anger among The Comité Champagne who deemed its use to promote the beer “unduly” and “unfair practice” given that “Champagne” is a protected term reserved only for sparkling wines produced in Champagne using the traditional method.

Savour Beer reacted by releasing a “public apology” video via YouTube featuring a man in a dunce hat, surrounded by photographs of Bruce Forsyth and the Queen, who explains that the brewer would be removing all reference to the term Champagne from its bottles of beer.

Using exaggerated air quotes, the Savour Beer representative says: “Our beer has absolutely nothing to do with Champagne. It doesn’t taste, smell or look like Champagne. It isn’t made in Champagne and personally I have never even been to Champagne; except of course it uses the traditional method which is also used in the making of Champagne, but anyway.”

He added: “This is usually the bit where people get a little bit emotional and say that we are sorry, embarrassed or humiliated by the incident but we are not one for getting caught up in the sentimental stuff, so unlike Bill Clinton and Tiger Woods we will give it a miss for today.”

The video ends with the man holding up a bottle of Champagne, then beer, as if to make their point of difference clear.

Other regions in France which produce sparkling wine using the traditional method, such as Crémant and Saumur, are not permitted to used the term on their products.

The term is legally protected through the appellation d’origine controlee which guarantees the place of origin for grapes used in the sparkling wines.

Savour Beer founder, Sandy Kirkpatrick, said: “We received a letter from the CIVC highlighting their concerns with our use of the term Champagne in relation to our Sparkling Beer. We released this video to ensure there was absolutely no confusion between the two”.

“As highlighted in the video we have agreed to remove all references to Champagne and disassociate ourselves completely from the term going forward. We hope there are no ill feelings and that this clears up the matter once and for all.”

A limited run of 670 bottles of the beer have been produced which are currently on sale for £15 at London restaurants including The Ledbury, Chez Bruce and The Square restaurant in Mayfair.