Fans of the Canadian football team the Winnipeg Blue Bombers will soon be able to resurrect the “beer snake” at home games, the practice having been banned in 2010. 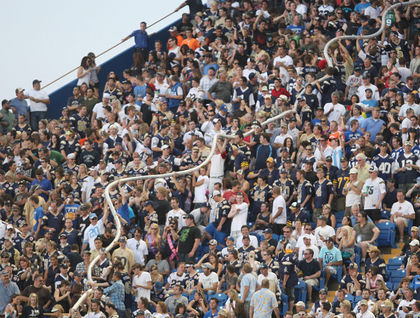 “Beer snakes” are common at sporting events and involve spectators stacking their plastic beer cups together to form a snake that can, at times, stretch for hundreds of metres.

Aussie cricket fans last year set a new (though unofficial) record for a beer snake with one that stretched for 175 metres.

Despite not appearing particularly dangerous, officials tend to stop these creations and the beer snakes created by Blue Bombers fans suffered a similar fate in 2010 when officials grew worried people could be injured by flying cups thrown by other spectators wanting to add to the chain.

Citing safety concerns the practice was banned. However, perhaps realising that Blue Bombers fans need something of a pick-me-up after yet another season of failing to make the play-offs, the management have decided that beer snakes will be allowed in a special “fan zone” on the lower levels of the home stadium from the 2015 season.

Season ticket prices are also going up by 2%.