The days when speculation in First Growths drove the trade almost exclusively appear over.

“When the market is in decline people are buying wine for other reasons. If they are speculating it’s in what they consider lower risk wines further down the value chain,” said Gibbs.

“For the merchants it’s about confidence. In a rising market they tend to take on more than they need. In a declining market they won’t take on a single bottle more.”

Liv-ex tracks the proportion of trade that is en primeur during a campaign, which this year fell to just 3.5% by value. “What that says is that no-one blinked or even cared about the 2013’s,” said Gibbs.

“With a successful en primeur campaign you’d expect it to be a lot more, to the point where it can be the only thing traded all month.”

Bordeaux’s slide from 95% of Liv-ex trade in 2011 to 79% in the year to date appears alarming, yet it needs to be set in context. “Before the market took off in 2004/5 Bordeaux accounted for 75 – 80% of trade,” said Gibbs, who believes this it “where it would naturally settle, all things being equal.”

If other regions have filled the gap, he feels “part of the story is that while Bordeaux has been in a malaise producing quite indifferent vintages like the 2011, ’12 and ’13, the rest of the world has been releasing wines from ’09 and ’10 which have been knocking people’s socks off.” 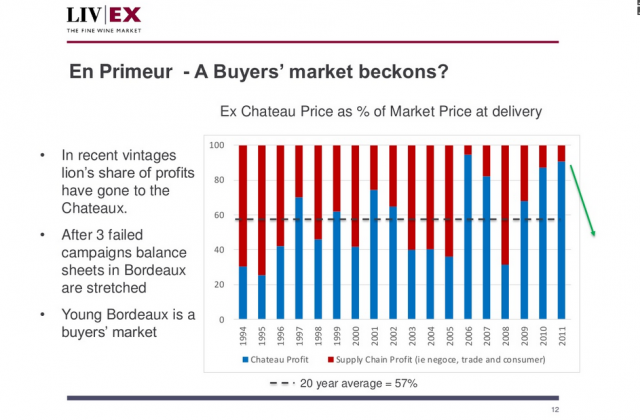 Whether it has will become apparent the moment the 2014 prices are released. Gibbs wouldn’t be drawn on the sort of reduction needed to re-engage the market, but suggests producers study the graph above carefully. It shows how the share of value taken by the Château-owners has soared from a 15 year average of 57% to nearer 90% of late.

This leads Gibbs to a blunt assessment: “The market has turned away from Bordeaux. It’s sick of losing money and feels it’s owed one.”