A UK company has launched what is claims is the world’s first barista-style machine that can adjust the “hoppiness” of a beer in seconds. 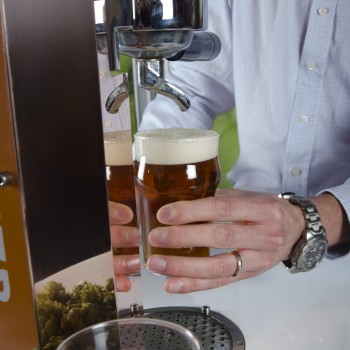 Hoppier, developed by Cambridge Consultants, is capable of adjusting the strength of hops in a beer and its flavour on demand – a process its inventors have described as making “an espresso of a beer”.

Normally the traditional brewing and dry-hopping process to produce a beer takes up to two weeks. However Cambridge Consultants claim Hoppier can change the flavour of a beer in just seconds with equal results.

Edward Brunner, head of food and beverage systems at Cambridge Consultants, said: “We knew, that pressure is fundamental to extracting flavour in espresso machines – so part of our investigation was to see whether it does anything for beer.

“As a result, we have speeded up the dry-hopping process – and, by adding extra hops at the point of dispense, their volatile aromas are as fresh and intense as possible. Additionally, the aroma of the finished pint can be adjusted by increasing or decreasing the quantity of hops and by changing the type of hops used.”

The device can be retro-fitted onto bar tops and could even be used to add new flavours such as spice or fruit, tapping into what its inventors see as a trend for “personalisation” within the industry.

The technology will be demonstrated by Cambridge Consultants at the 3rd Annual Canadean Alcohol Innovation Congress on 2 to 3 of December at the Millennium Gloucester Hotel London Kensington.