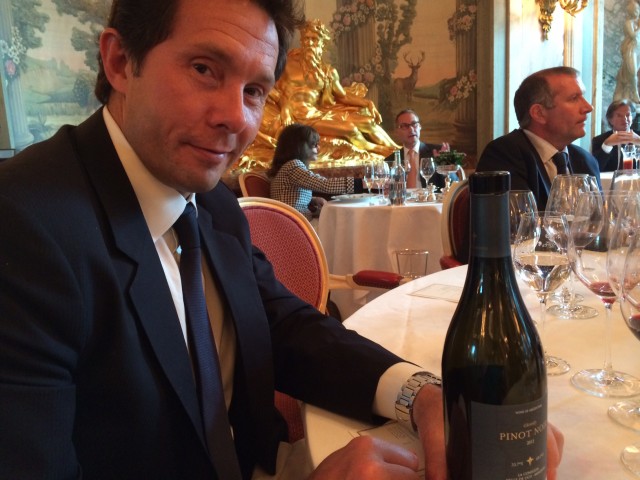 Alberto Arizu of Luigi Bosca introduces the Grand Pinot Noir “La Consulta” over a glamorous lunch at The Ritz hotel in London (restaurant mogul Richard Caring was dining just in shot, back right). Part of the Mendoza producer’s new terroir-focused range, it is accompanied by a Malbec “Los Miradores” and Riesling “Las Compuertas”, all carrying an RRP of £17.50, which are due to arrive in the UK soon through agent Bancroft Wines. 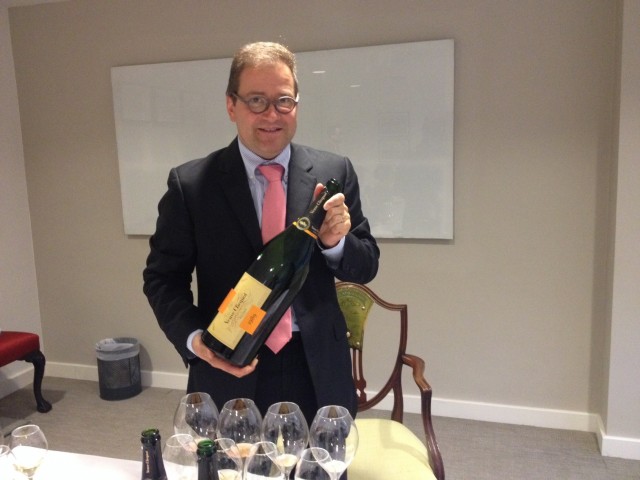 Veuve Clicquot’s senior winemaker Cyril Brun hosted a masterclass at Moët Hennessy’s autumn tasting on Wednesday taking guests through its Cave Privée Collection of late-release vintage Champagnes, including a 1989 blanc Jeroboam. Throughout the tasting Brun shared his thoughts on the future for Jeroboams and their place in ageing vintage Champagnes. 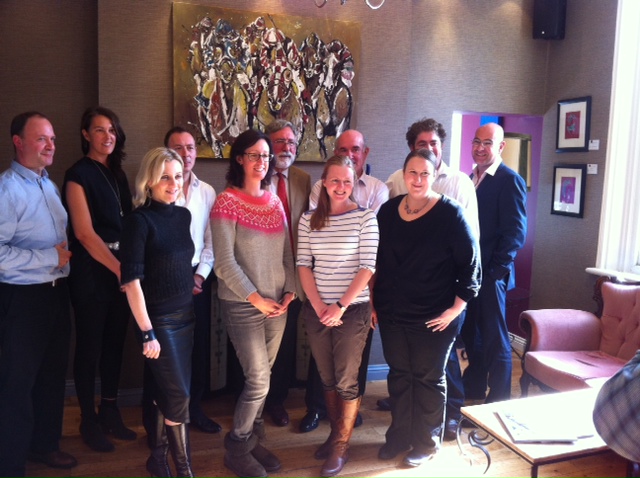 A panel of expert judges have been sipping their way through hundreds of wines this week as part of the drinks business’ Global Masters Sauvignon Blanc, Riesling and Chardonnay competitions. 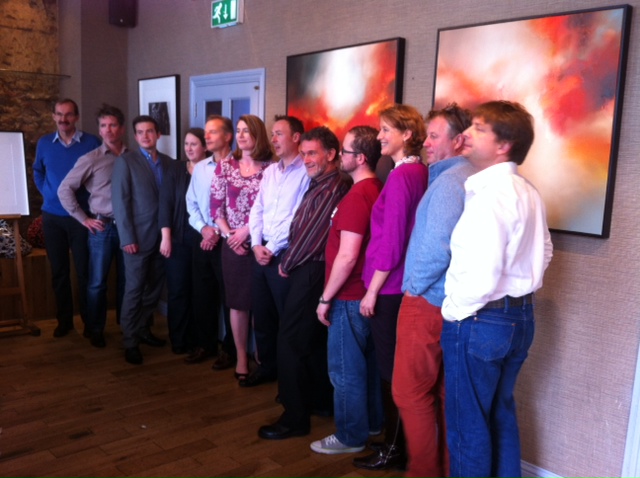 The Global Masters sees wines judged by grape variety and price only, eliminating any prejudice about their origins. The results of all three competitions will be published in an upcoming issue of the drinks business. 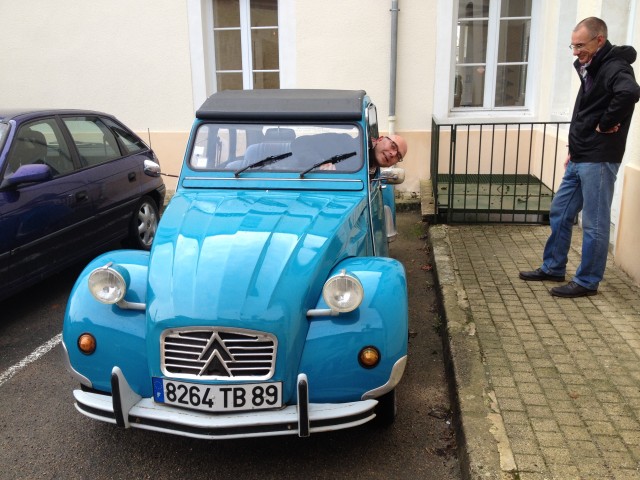 db’s deputy editor, Lucy Shaw, has been in Chablis this week, where she got to scoot around the vines in turquoise 2CV Lulubelle, owned by viticulturist Eric Szablowski (right), which wine writer Andrew Catchpole took a particular shine to. For Lucy’s full gallery from the region, click here. 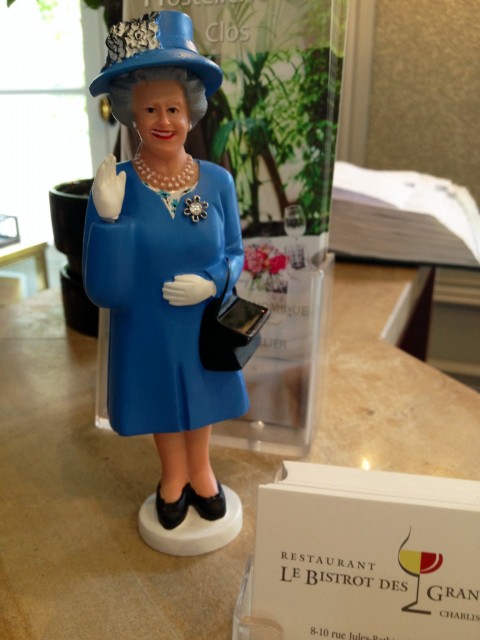 We were made to feel at home in Chablis, with our hotel having thoughtfully arranged for Queen out to greet us. 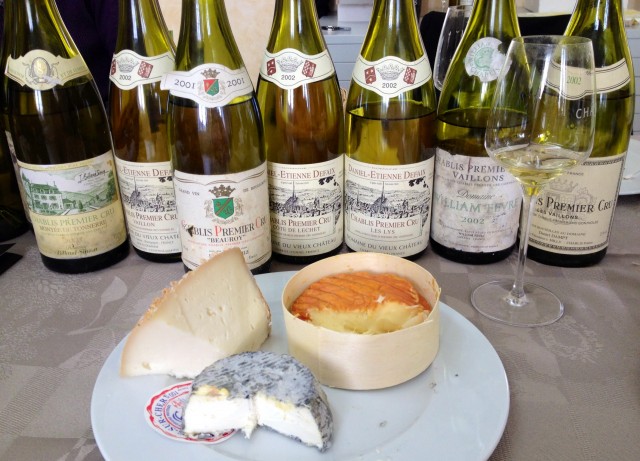 During the trip, the BIVB Chablis laid on a tasting of older vintages of various Chablis estates, paired with local cheeses, including the devilishly moreish Epoisse. 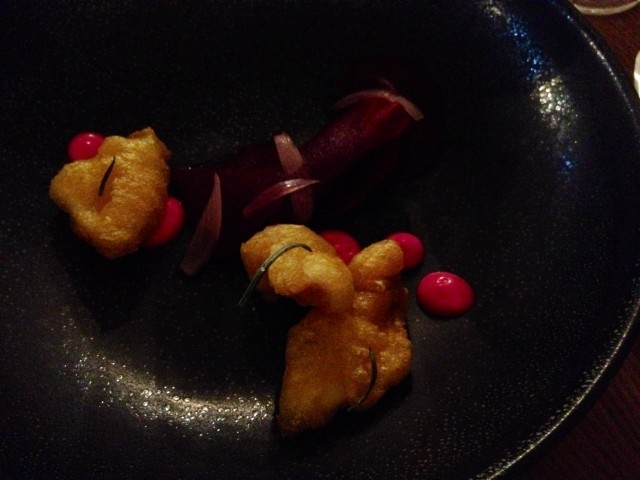 While not (yet) known as a culinary hub, db was incredibly impressed with the quality of food on offer at Chablis’ new addition Au Fil du Zinc, run by a Japanes husband and wife duo. Opting for the six-course tasting menu, highlights included pumpkin soup and gnocchi, foie gras with fig, duck breast and leek, and squid with beetroot mayo. A Bib Gourmand surely beckons… 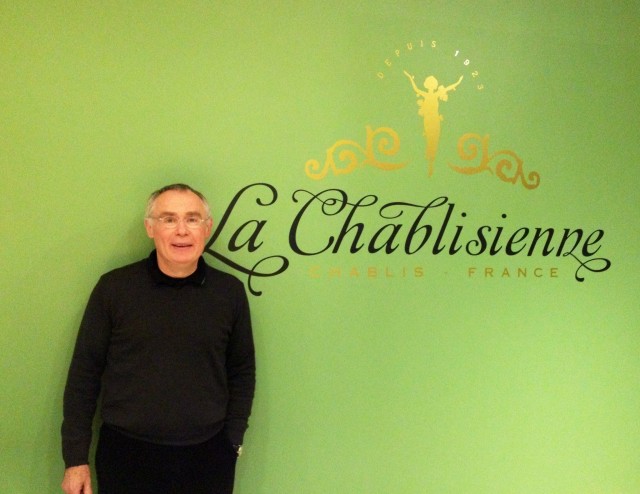 Our dining partner at Au Fil du Zinc was Hervé Tucki, of co-operative La Chablisienne, which formed in 1923 and now comprises 280 producers. 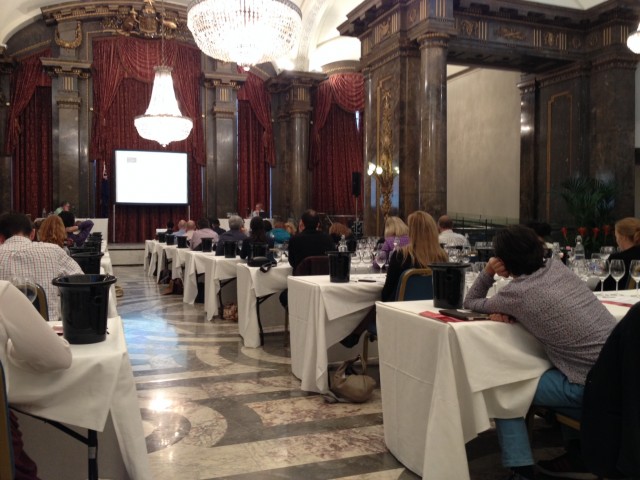 Tim Atkin MW and Steve Webber, chief winemaker at De Bortoli in the Yarra Valley, took members of the trade and press on a one-day course on Australian wine, hosted by Wine Australia. Held in the opulent Australia House in London, attendees tasted their way through eight flights of wines from Semilion and Shiraz to sweets wines and Pinot Noir. 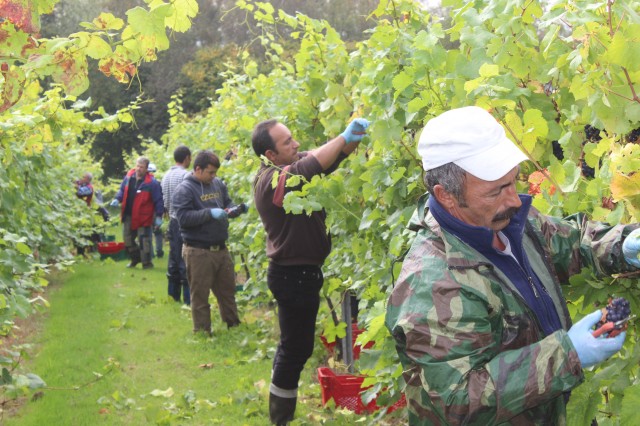 The Bolney Estate in Sussex began its Pinot Noir harvest at the end of last week with the Bibendum team heading down to snap some pictures of the action. 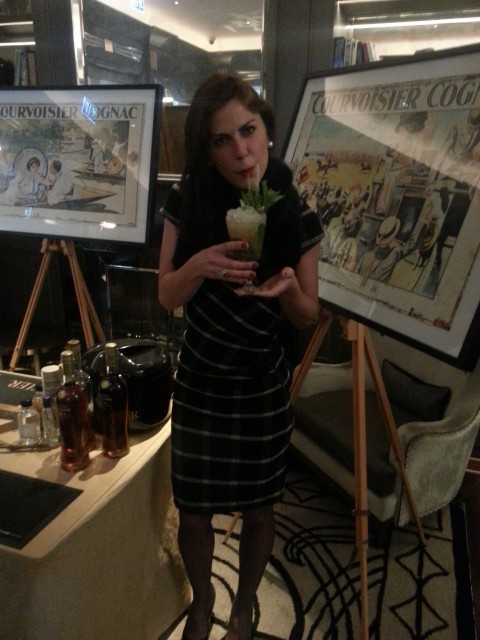 Courvoisier global brand ambassador Rebecca Asseline took consumers on a tour of Courvoisier as part of London Cocktail Week. Guests to the event were treated to a tasting of Courvoisier VSOP Exclusif and Courvoisier XO, as well as a sensory experience and dessert pairing, at The Churchill Bar & Terrace, part of the Hyatt Regency London. Eve Vasileiadou, assistant bar manager, welcomed guests with a Courvoisier cocktail named Coupe De Jarnac made with lemongrass and thyme-infused sugar syrup, angostura bitters, green chartreuse, lime and mint leaves.

Champagne house GH MUMM announced itself as the official supplier of the French Palais de la Légion d’Honneur, a partnership stemming from the Champagne house’s creation of its Cordon Rouge in 1876 which was decorated with a red silk ribbon to symbolise the highest of French honours – the grand croix de la Légion d’honneur. 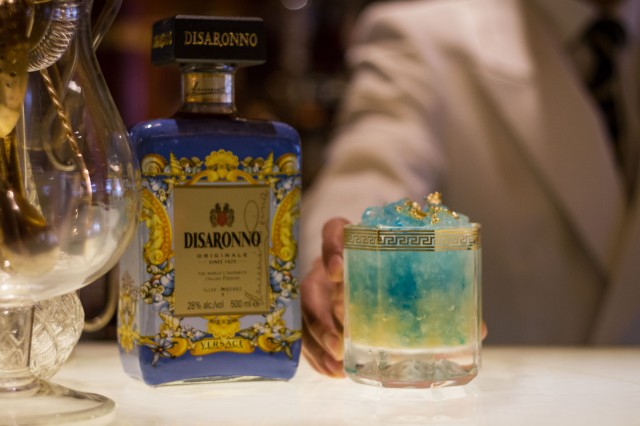 Disaronno has been given a high-fashion makeover with the release of its “Disaronno wears Versace” bottle inspired by the luxury fashion house’s Home Collection. The limited edition bottle was launched at an event at One Mayfair in London last week with guests served Disaronno Versace sour cocktails designed by UK brand ambassador, Rod Eslamieh and mixed by bartenders from The Rivoli bar at The Ritz. 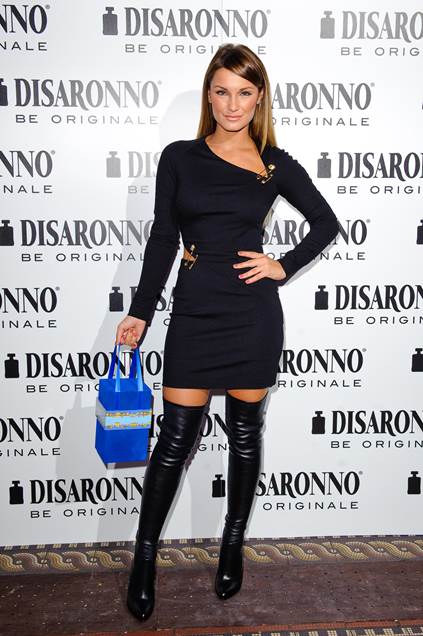 Guests to the bash included The Only Way is Essex’s Sam Faiers, rapper Wretch 32 and MTV’s Laura Whitmore.

Dominic Jermey, chief executive of UK Trade and Investment (UKTI), paid a visit to Aston Manor Cider this week as part of an ongoing relationship following a multi-million deal with the government to help the company grown its sales overseas. Aston Manor Cider is the UK’s largest independent cider maker with their headquarters based in Aston, central Birmingham. The company recently committed to planting 1,000 acres of new orchards in Herefordshire resulting in 25-year-long contracts with farmers to supply apples. 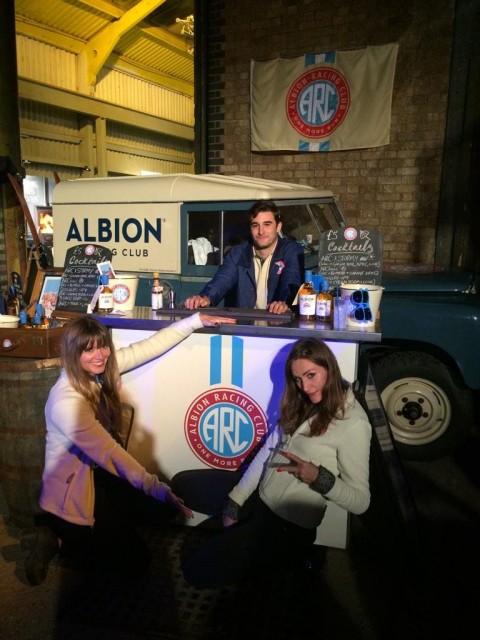 British spiced malt brand Albion Racing Club will be hosting a pop-up bar at Best of Britannia show in Clerkenwell this weekend. 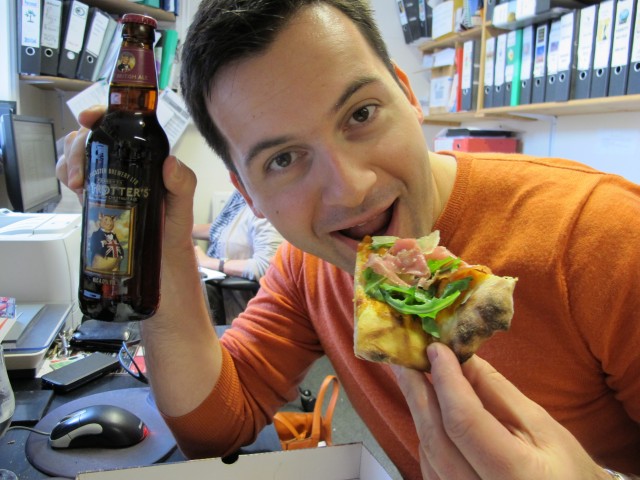 And finally, Emanuele Barasso of R&R Teamwork was nice enough to grace us with this “Pig’ture” of him tucking into a slice of pizza with a bottle of Mr Trotter’s Chestnut ale.