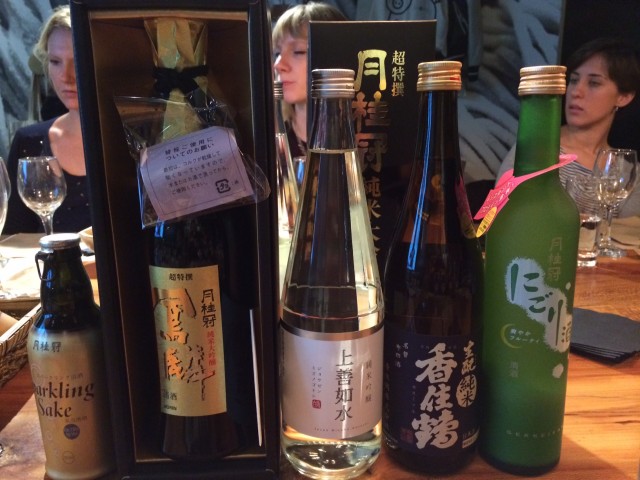 db celebrated World Sake Day with a masterclass of different styles and food pairings at Shoryu restaurant in London, which serves over 80 different types of Japan’s rice-based drink. Starting with a sake cocktail, guests moved from a bottle fermented sparkling style through three quality grades of sake from different regions, before finishing with a cloudy, unfiltered sake which is typically served with pudding or richer dishes. 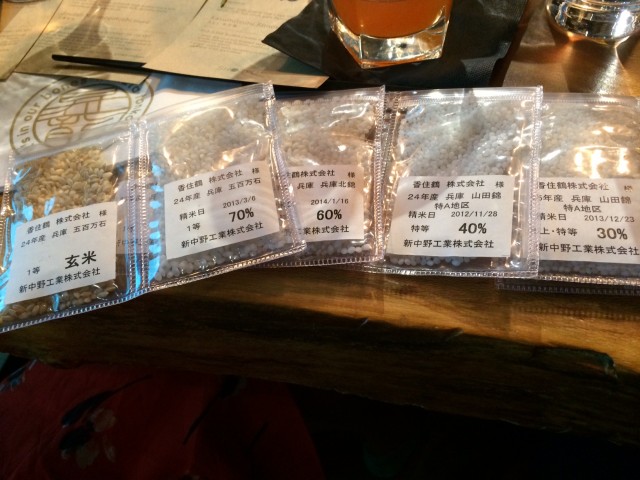 The different grades of sake rice: the percentage on each label refers to how much of the coarse rice husk is left on the polished grain, so the lower the percentage, the higher the quality – and price. 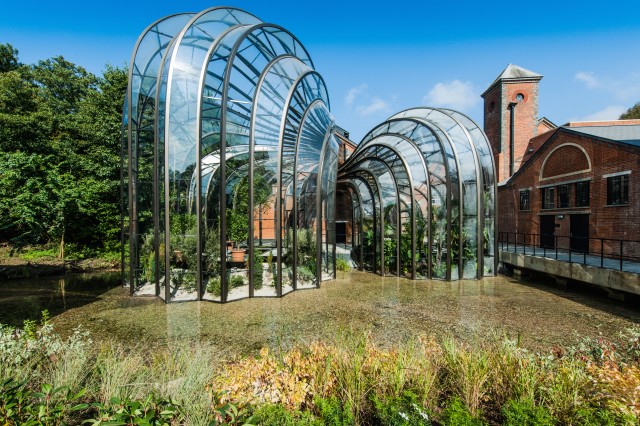 Bombay Sapphire opened its new home this week after transforming an historic site in southern England into a “state-of-the-art” distillery and visitor centre. The site’s 40 buildings include two glasshouses, one temperate and one tropical, where visitors can see the 10 botanicals used by Bombay Sapphire – juniper, lemon peel, grains of paradise, coriander, cubeb berries, orris root, almonds, cassia bark, liquorice, angelica – on display. 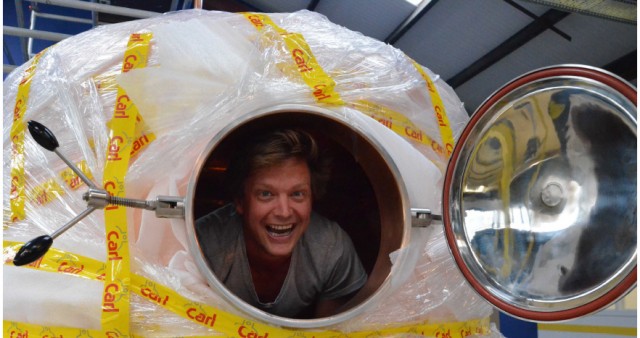 Sam Sipsmith was very happy to take delivery of a shiny new still this week which will take up residence at the Sipsmith Distillery’s new home in Cranbrook Road, Chiswick. 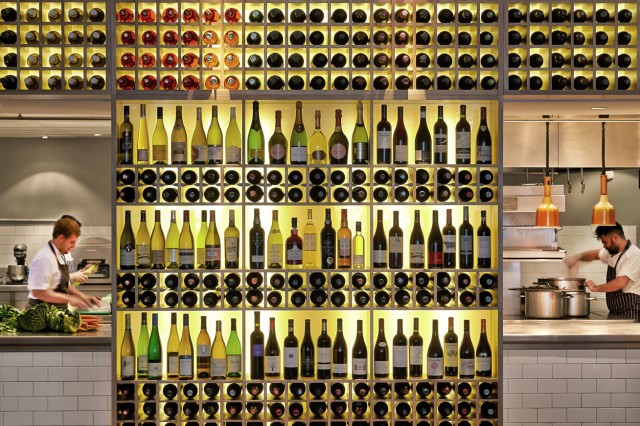 db paid a visit to the recently relaunched Almeida restaurant in north London, which has dispensed with the traditional wine list in favour of this “Wine Wall” display. Among the recommended pairings was this beautifully presented beef tartare with a pale pink Bobal rosé from Spain – an excellent match for the sweet but earthy flavour combinations in the dish. 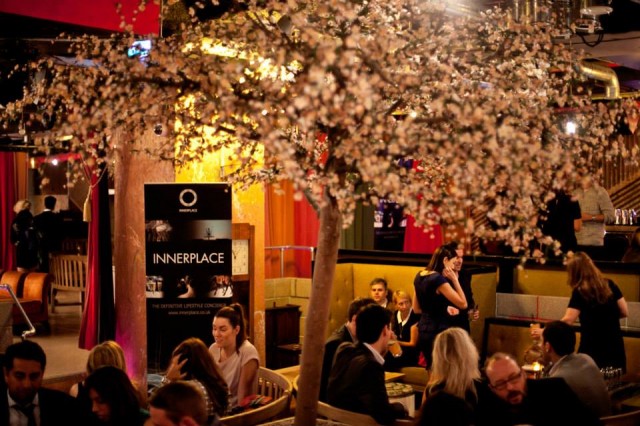 db‘s Neal Baker was invited along to the newly opened Café Kaizen in London’s Mayfair this week, trying a host of top-notch cocktails at the Japanese-inspired bar and nightclub. On the invitation of Innerplace – a personal concierge service that provides complimentary entry at London nightclubs, priority bookings, access to private members’ clubs, VIP invitations, and news on the latest openings – the members party this week was a big hit, with complementary cocktails in the zen venue going down easy. 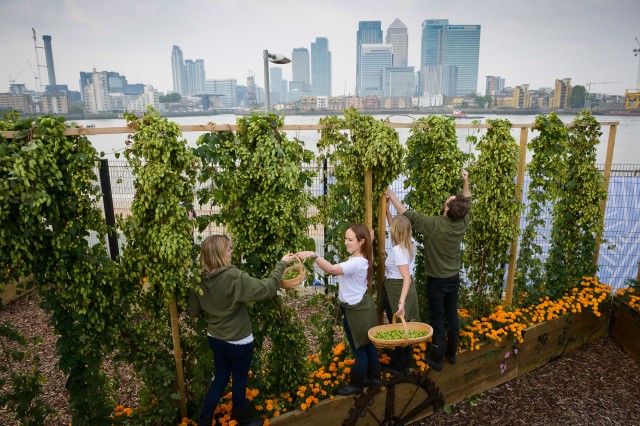 London’s first hop harvest in more than 100 years began this week. Meantime’s Urban Hop Farm is based in Greenwich on the banks of the Thames with its first crop of hops set to be used to create a beer that reflects “the true flavour of the Capital”, due to be released later this year. 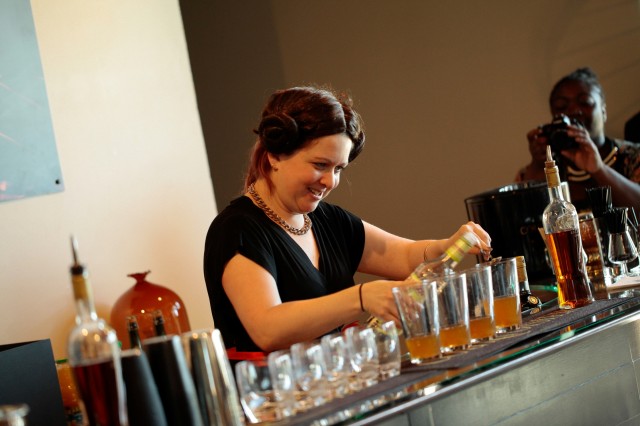 The Courvoisier Chateau in Jarnac was the venue for the culmination of Maxxium UK’s search for the most spontaneous bartender, which was awarded to Sarah Mitchell, formerly of Callooh Callay. Sarah’s winning serve, named Jarnac Jedi was made using Courvoisier Exclusif with lemon juice, gomme syrup, marmalade and apple juice. Sarah went head-to-head with Federico Gisbert Johnson of The Hawksmoor Guildhall London to compete for a single sought-after ticket to Paris for a VIP overnight trip.

Italian wine producer Franciacorta and Japan’s leading department store, Isetan have teamed up to bring the worlds of food and fashion together. Ten windows of Isetan Department store in Mitsukoshi (Tokyo) will be dressed in the classic Franciacorta style until 14 October with inspiration for the theme taken from the Italian words Serioso (serious), Naturale (natural) and Con Grazia (gracefully). 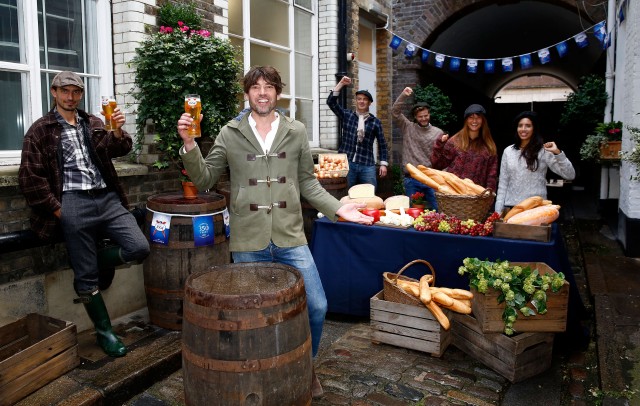 Blur bassist and cheese maker Alex James was on hand to help celebrate 350 years of Kronenbourg 1664 this week contributing a soft to the festivities. 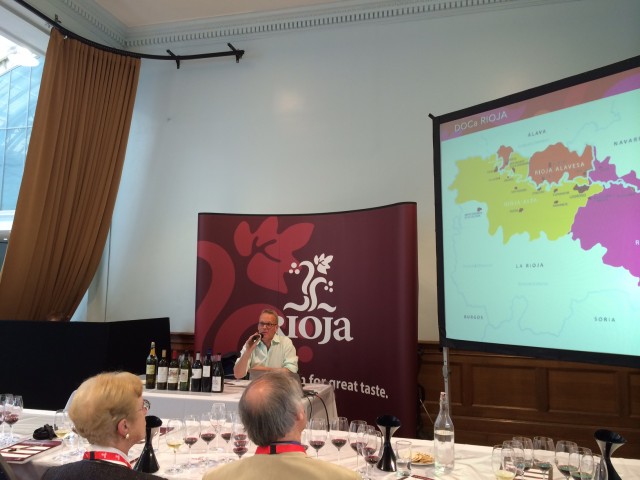 This week’s Wines from Rioja trade tasting in London saw Tim Atkin MW show off a collection of wines which embody the “revolution” in favour of single vineyard or single village wines that has quietly taken place in Rioja during the last 25 years.

Moët & Chandon helped to toast Europe’s victory in the 2014 Ryder Cup this week – the official Champagne of the tournament held at Gleneagles in Scotland. The final day of play saw the European team retain their title with a 16.5 – 11.5 victory over the USA, following their success at Medinah, Illinois in 2012. Moët & Chandon has been official Champagne of The Ryder Cup since 1993. 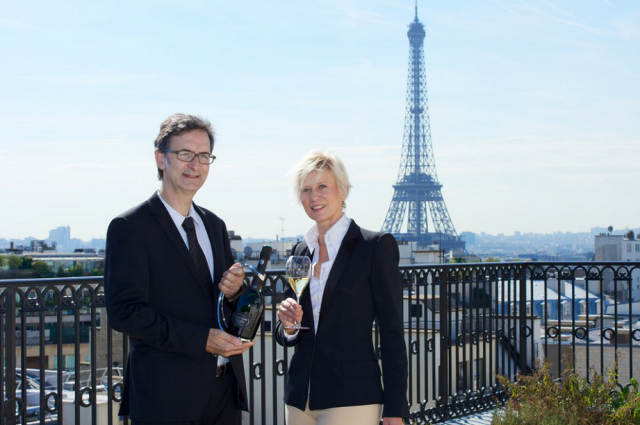 Around 40 French journalists attended the newly opened Peninsula Paris hotel to celebrate the launch of the Laurent-Perrier Aiguière Grand Siècle, set in front of the Eiffel Tower.

Digby Fine English celebrated its first birthday in style with an evening of opera and a boozy British literary reading at the Royal Opera Arcade in London’s Pall Mall Fine Wine on 30 September. Author Henry Jeffreys read extracts from his new book, Empire of Booze. 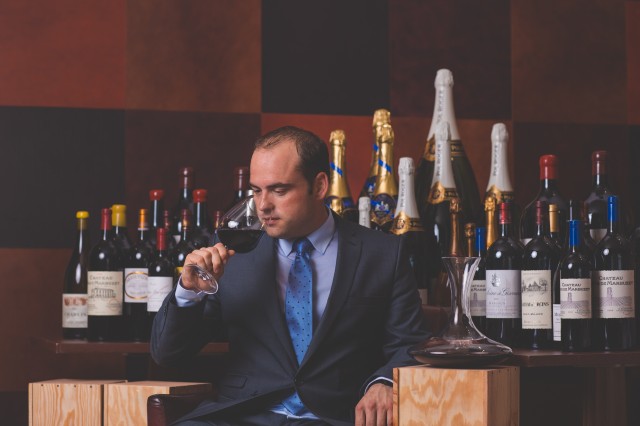 On 1 October, the Michelin-starred Bohemia restaurant in Jersey launched its new Grand Formats wine list, believed to be one of the largest in the UK, comprising more than 30 different large bottle wines from Magnums and Imperiales to Salmanazzar and Nebuchadnezzars of Champagne. 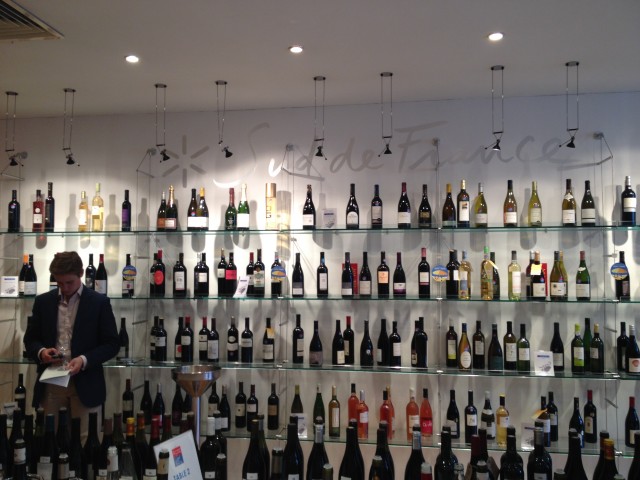 While supposedly our man in Hong Kong, we witnessed a spooky apparition of our senior staff writer, Rupert Millar, at the Sud de France tasting in Cavendish Square this week. 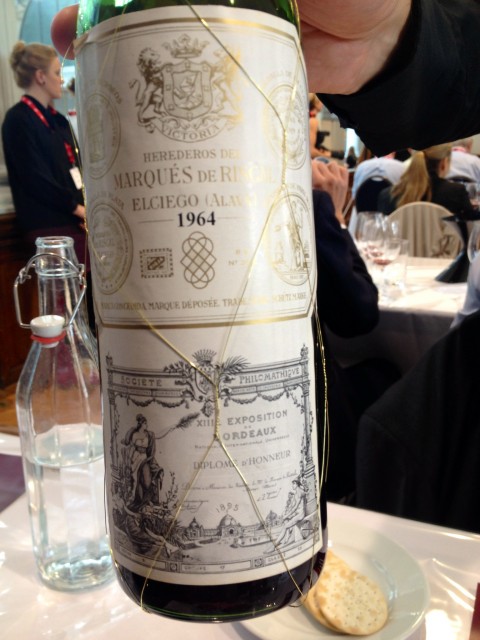 db was treated to a horizontal tasting of Riojas from the 1964 vintage at the Wines From Rioja tasting this week. Hosted by Sarah Jane Evans MW, among the delicious drops on pour were wines form CVNE, Campo Viejo, Franco Españolas and Marques de Riscal (pictured). 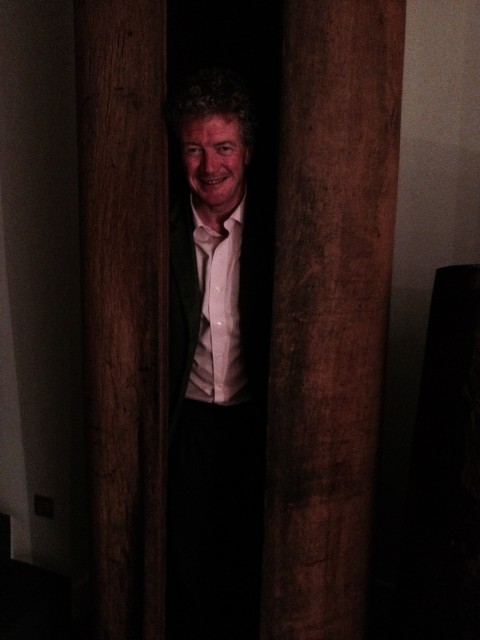 db’s Lucy Shaw was lucky enough to be invited to spend the weekend in the Douro Valley at Christian Seely’s Quinta da Romaneira. The perfect host, Christian kept guests entertained with tales of subversive tailors, dodgy gurus and misadventures at the Garrick Club. A keen wood sniffer, he can be seen here attempting to hide inside one of the giant sculptures dotted about the quinta. 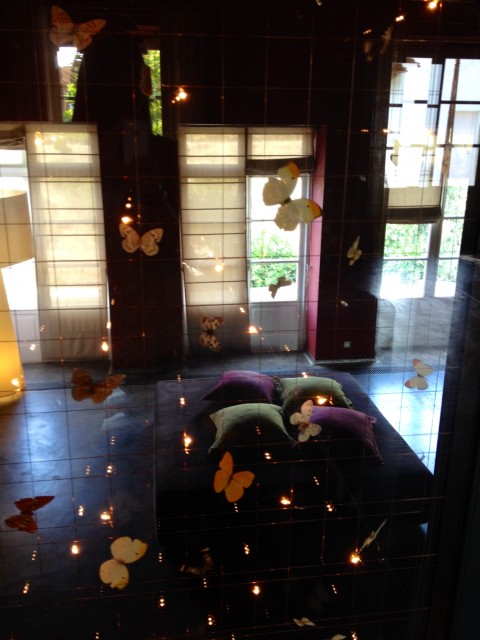 Roaming about Romaneria was a treat, as the space boasts a treasure trove of curios, from bugs in boxes and old records to this Damien Hirst-like wall of butterflies. 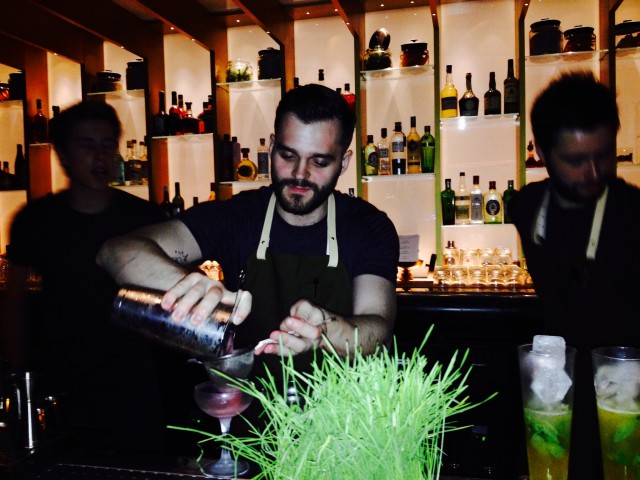 Cocktail guru Ryan Chetiyawardana launched his much-anticipated new bar, Dandelyan, inspired by botany and the British countryside, at the shiny new Mondrian hotel on the Southbank this week. Among the sips on pour at the launch were the Dandelyan Sour, featuring gin, lemon, lime, dandelion capillaire and garden bitters; and the Ford & Warner, a blend of Ford’s gin, bitterered blackcurrant, dandelion flower and lemon. 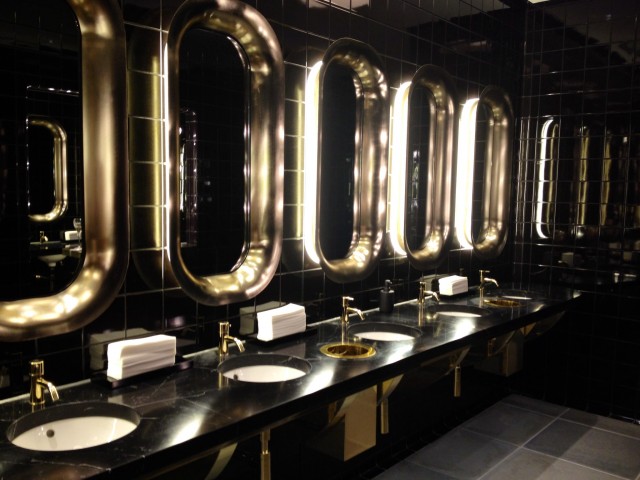 And finally… we couldn’t resist snapping these nautical but nice (and rather bling) loos at The Mondrian post Dandelyan launch.