Red Obsession opened in Australia last August, where audiences described it “as a cautionary tale about China’s power and presence in the world,” said Ross. “There’s been this perceivable shift in power from the West to the East, and we examine that through the prism of Bordeaux.” Yet for Ross it was: “more of a love story with these very strange partners drawn to each other despite different languages and cultural backgrounds. It’s an uneasy romance with both dancing around each other.”

If the romance has soured somewhat, he believes Bordeaux did exploit China’s gullible embrace of the 2009 vintage. “Despite what they might say, the Bordelaise were looking to take advantage of that naivety.” When offered another ‘vintage of the century’ in 2010 with even higher prices, China simply chose to buy more of the 2009, claimed Ross. “The Chinese I spoke to said; ‘look we may be naïve, but we’re not stupid’.” Since then the government’s anti-corruption measures have brought an end to lavish wine gifting. Instead of £2,000 bottles of Lafite, “people are now gifting vintage tea,” said Ross. 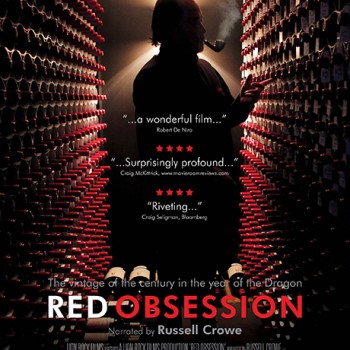 Regarding China’s potential impact on other regions, Red Obsession quotes Jancis Robinson MW as being ‘terrified for Burgundy’. “She’s probably right,” said Ross, “though there’s probably a natural tendency to fear ‘the other’, and China is big and powerful, and unfathomable for a lot of Westerners. I think everyone in the business could do well by watching the film.”

Ross praised associate director Andrew Caillard MW for helping to reassure nervous château-owners. “As soon as Andrew gave them the assurance that we weren’t trying to stitch them up, and that we weren’t another Mondovino, they at least gave us interview number one.”

Whether Red Obsession will change Bordeaux appears doubtful. As a wonderfully candid Christian Moueix of Château Petrus says in the film: “We never learn from our mistakes. We crash, we burn and then like the phoenix we rise again.”

Red Obsession will be released on iTunes on November 20th in the UK, Germany, Italy and Scandinavia. You can watch the trailer below.