A brewery’s attempt to trademark its Star Wars-themed “Empire Strikes Bock” beer has raised the ire of Lucasfilm. 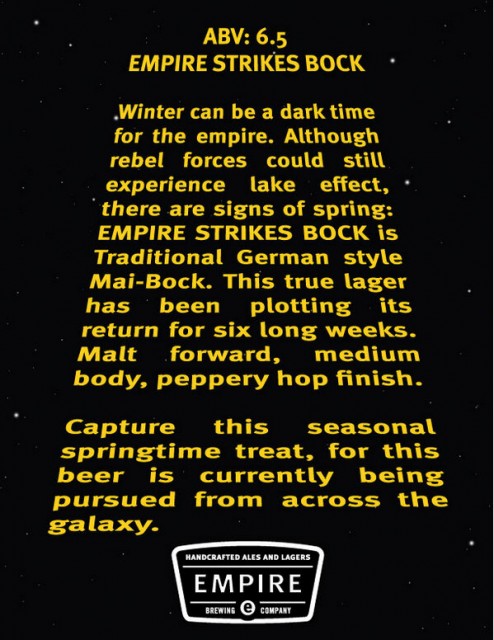 The New York-based brewery and brewpub has named its new bock style beer, “Strikes Bock”, which with the brewery name creates a combination not unlike the name of the classic film The Empire Strikes Back from the original Star Wars trilogy.

Too close for comfort for the now-Disney-owned corporation apparently, which has filed a Notice of Opposition which claims that the similarity in names could cause confusion for consumers.

The company’s notice claimed: “Applicant’s EMPIRE STRIKES BOCK mark is virtually identical in sound, appearance and connotation to Lucasfilm’s THE EMPIRE STRIKES BACK mark, differing by only one letter in the respective last words ‘BOCK’ and ‘BACK’ and the initial word ‘THE’.

Although the company may have a point it has somewhat shot itself in the foot with its application, incorrectly stating that the beer’s name is “Empire Strikes Bock” when it is, as brewery owner David Katleski explained, “Strikes Bock” by Empire Brewing.