The Princely family of von Liechtenstein is hoping to create a foothold in Asia with wines from its Austrian vineyards and perhaps those from its Liechtenstein holdings later on. 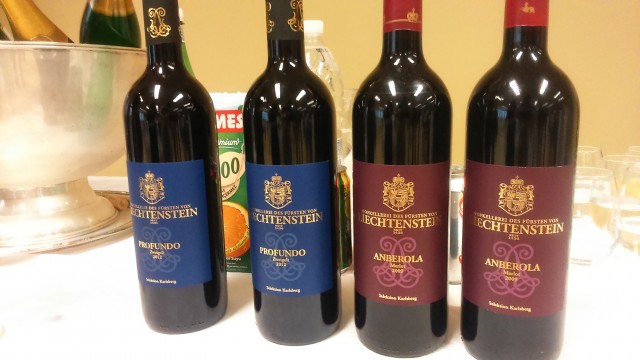 The largest and oldest domain is in the Austrian Weinviertal near Vienna with 40 hectares and there is a 4ha property in the principality of Liechtenstein itself – some of the rarest and most expensive vineyard land on the planet.

The Austrian vineyards are principally composed of Riesling, Gruner Veltliner, Zweigelt, Merlot and Traminer varieties, while those in Liechtenstein are Pinot Noir and Chardonnay because of the country’s more “Burgundian” climate.

At a tasting in Hong Kong this week, Princess Marie von Liechtenstein explained that, currently, the Austrian wines (which the family have owned since the 1400s) have a reasonably wide distribution in Austria, Germany, Switzerland and the Czech Republic  but that the wines from Liechtenstein are currently only sold to private clients (usually from those same countries).

The Austrian wines are currently imported into Taiwan and by Schmidt Marketing in Hong Kong, Macau and China – operations which only began at the end of last year.

Estate manager Simon Klocker, explained that, for now, the estate and family were keen to limit the scope of their ambitions until they had created solid foundations in the region – helped in part by the Liechtenstein family’s other major asset – the LGT private bank.

“We really want to focus on these markets, cater to them” explained Klocker. “We intend to visit once a year at least, perhaps twice.

“We want to know our clients and we want them to know us. Maybe  in future we’ll sell to South Korea and Japan.”

There was also the suggestion that in future the wines from Liechtenstein might also make it over but Klocker stressed it could only ever be in extremely limited quantities.

“It’s a really tiny production,” he said. “We sell to the domestic market and may export in future – a 1,000 bottles perhaps but even that’s 10% of our production.

In total Liechtenstein has some 26ha of vineyards split between around 100 growers.