A beer company in Papua New Guinea is using a beer box that, when burned, acts as an insect repellent. 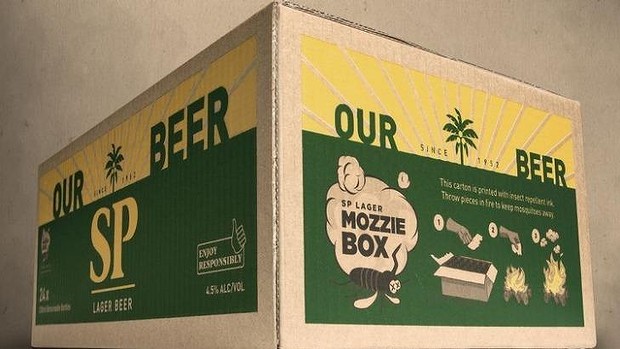 SP Lager, which is owned by Heineken, has begun using the “Mozzie box” as part of a limited edition run. The box itself was created by Brisbane-based business GPY&R after a request from Heineken.

According to the Brisbane Times, SP Lager’s market research showed that its customers enjoyed drinking beer around a fire but large numbers of mosquitoes often dampened the enjoyment – Papua New Guinea sees over 1 million malaria cases a year.

Speaking to the paper, GPY&R’s manager, Phil McDonald, said that the idea behind the “Mozzie Box” was born out of a trip to the island.

He said: “We saw them ripping up the carton of beer and throwing that on the fire, so the guys came up with a fantastic idea to put something in the cardboard that actually was set off by the flames and repels mozzies,” he said.

Using eucalyptus, which is an effective mosquito repellent, McDonald did say that burning the box was no guarantee of not being bitten and, potentially, catching malaria.

Nonetheless, it may offer some relief and, he added, at the very least would help raise awareness of the issue with the boxes potentially becoming permanent.