The Austrian Wine Marketing Board has announced a new three-tier quality hierarchy for the country’s sparkling wines as it seek to raise the profile of this style. 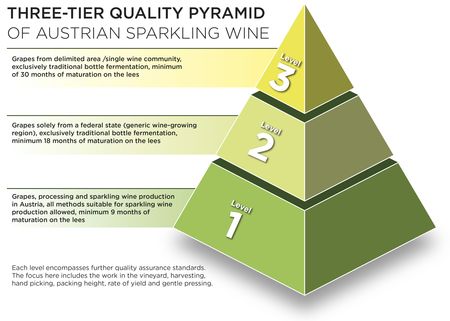 Level 1, the lowest tier, features a tightened minimum requirement for Austrian sparkling, that guarantees all grapes and base wine have been produced within the country. In addition, sparkling wines within this category must spend at least nine months maturing on lees.

The second tier requires wines to be produced in the traditional method, with their secondary fermentation carried out in bottle. Meanwhile all grapes and base wines must come from one of Austria’s “generic” wine growing regions and spend at least 18 months maturing on lees.

At the very highest tier, Austrian sparkling wines may come only from a single commune, such as Gols or Langelois, with the option to include specific vineyard designations. Following secondary fermentation in bottle, a minimum 30-month period of maturation on lees is required, while the wines may not reach the market until at least three years following their harvest.

The next few months will see further work to define quality standards for base wines, as well as the development of a marketing strategy for the new pyramid, with a view to achieving legal status for the classification in 2015.

As the AWMB highlighted that these top end requirements are as strict, if not stricter, than leading sparkling wine styles such as Champagne or Franciacorta, managing director Willi Klinger outlined the ambition behind this new system.

“In winemaking, Austria is already amongst the world’s best,” he asserted. ““And now, our goal with the new quality pyramid is to bring the public closer to the origin, diversity and excellent quality of Austrian sparkling wine – and with that, awaken the same patriotism that is already so strongly shown for our quality still wines!”

Herbert Jagersberger, chairman of the Austrian Sparkling Wine Committee, which was set up last year as a precursor to this new classification hailed the pyramid as representing “the beginning of a new era for Austrian sparkling wine.”

He continued: “The Austrian Sparkling Wine Committee is proud to launch this important step for quality and marketing through the involvement of all sparkling wine producers in the country.”

According to the AWMB, sparkling styles currently account for around 10% of the nation’s total wine production.

On the commercial side, Nielsen data shows that volume sales increased by 30% between the 2008 creation of an annual Austrian Sparkling Wine Day – on 22 October – and last year. The same period has seen this category’s domestic market share increase by a similar amount, so that today almost one in every three bottles of sparkling wine consumed in Austria is produced domestically.