A look inside… The Palomar

The Palomar does things differently. With the volume knob cranked up to 11, chefs have been known to break into an impromptu percussion performance on the pots and pans in the restaurant’s open kitchen behind the 16-seater bar. 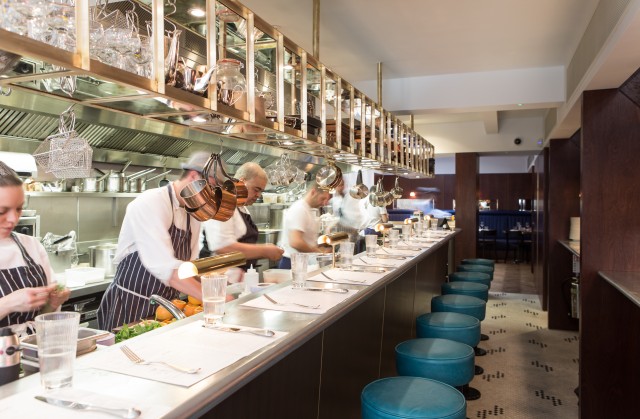 Having only been open a matter of months, a buzz has already built around the Soho newcomer, which has fast become the latest hot ticket in town making it impossible to secure a bar stool in the evenings due to its no bookings policy. Bookings can however be made for the 34-seater restaurant at the back, along with a one-off 5:30pm pre-theatre booking at the bar.

The restaurant sprung to life after the brother and sister behind The End and AKA nightclubs; Zoe and Layo (of DJ duo Layo and Bushwacka fame) Paskin took a trip to Jerusalem for a brainstorming session as to what their next professional move should be. Working as general manager of Hawksmoor Spitalfields at the time, Zoe agreed to go on the trip so long as they visited their favourite restaurant in town and one of the hippest restaurants in Israel – the boisterous, free-spirited Machneyuda.

A mutual friend put in a good word for them with the restaurant’s three owners and it soon became apparent that there was a mutual desire to open a new venture in a key European city: Paris, Berlin or London.

At the time all were undecided. “I loved the spirit and energy of Machneyuda, which stayed with me long after I left Jerusalem,” the bewitchingly blue-eyed Zoe begins, adding, “It was serendipitous that we should have chosen Jerusalem as the place to plot our next move.”

Having spent a lot of time in the city due to Layo’s DJing gigs and coming from a Jewish family, exploring Israeli cuisine seemed a natural fit for the pair.

Settling on central London over Paris and Berlin, the initial idea was to start out with a pop-up in order to gauge interest, though all involved were willing to take a leap of faith and open a permanent site.

While keen for the restaurant to have its own identity, it made sense to migrate a number of the star dishes from Machneyuda across the pond. “There’s a growing trend for Levantine cuisine in London at the moment, but I wasn’t looking over my shoulder at what other people were doing. It’s great that we can be part of the movement shining a light on Middle Eastern cuisine but we didn’t set out to do it,” says Paskin.

Deliberately choosing a name unrelated to Jerusalem, having thrown a load of potential names into the ring, The Palomar (meaning the dovecote) stuck due to its timeless, slightly Mediterranean feel. Designed by Gundy & Ducker, the interiors, featuring wood panelling, royal blue leather banquettes and a skylight in the main restaurant, hark back to the golden age of air, sea and rail travel in the 1930s.

“My father is an architect so he helped us with the design. The travel idea hit a nerve as our trio of chefs had all ended up in Jerusalem from different parts of the world and the idea of bringing the Machneyuda concept back to London was important,” says Paskin.

At the helm of The Palomar is head chef Tomer Amedi, who has upped sticks from Machneyuda to run the London kitchen with his wife Yael Vardi, the restaurant’s pastry chef responsible for the dangerously good kubaneh: pot baked bread served with gooey tahini and a ruby red tomato dip. 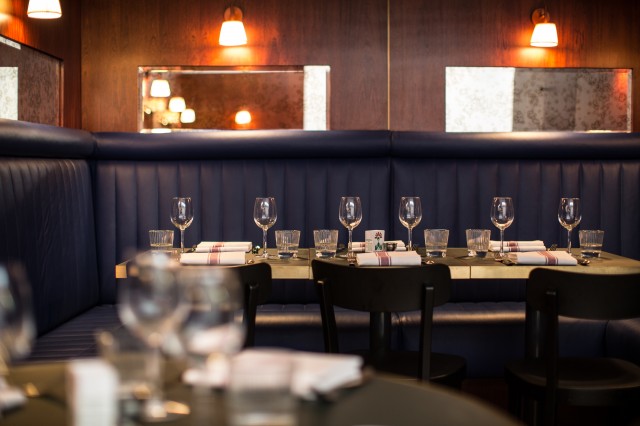 At the entrance to the long, thin Palomar is a raw bar where the likes of Moroccan-style oysters with coriander, lemon zest and harissa oil; and hand chopped beef fillet with bulgar, tahini, herbs and pine nuts are made. But the real magic happens behind the zinc-topped bar, where diners propped up on turquoise bar stools are given a front row seat to the theatre unfolding day and night, complete with gusts of sweet-smelling smoke from the Josper grill, delicious wafts of freshly cooked meat and the occasional smashed plate. 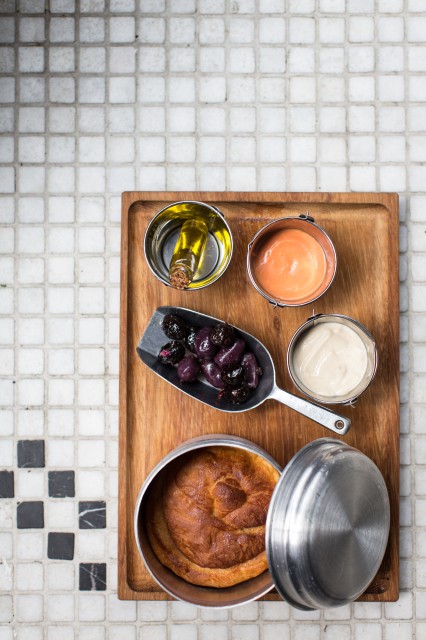 Desserts meanwhile, including decadent tahini ice cream that tastes like dulce de leche on steroids, are made in a prep kitchen on the lower ground floor along with the daily bread. How does working in the restaurant industry compare to running a nightclub?

“They’re both essentially entertainment industries – restaurants are such emotional places, they bring out the best and worst in people,” says Paskin, adding, “Music is a massively important part of what we do here and is pivotal in helping to create the right atmosphere.”

The Palomar takes its music offering so seriously that Layo regularly compiles playlists for different times of the day, moving from easy on the ear Ella Fitzgerald at lunch, to the Drive soundtrack early evening and full-on club bangers with a little samba thrown in after dark.

“It gets really vibrant here at night and the loud music won’t appeal to everyone but that’s the way we want it to be – you’re not going to come here for a quiet romantic meal, you’re going to come to have fun,” says Paskin.

Is she surprised by the level of hype surrounding the restaurant, which was recently voted the 8th best place to eat in London by Time Out mere months after opening? “We’ve been so busy with the opening that we haven’t had time to take it all in. We’re obviously over the moon about the positive reviews and the fact that both consumers and critics have embraced what we do,” says Paskin.

What sets The Palomar apart, in addition to the exquisite execution of dishes and their punchy, sparklingly fresh flavours, is the fact that dining there feels like you’re being cooked for by a family hell-bent on fattening you up.

“The familial element feeds into the soul of the place, and the fact that we have a husband and wife, and brother and sister on the team helps,” says Zoe, adding, “We’re a young team with an old soul. A number of our staff have worked with us before at The End and AKA, so they’re practically family.”

The Palomar’s pithy menu takes in all areas of the Levant, including Morocco, Egypt, Lebanon, Southern Spain and Jerusalem. 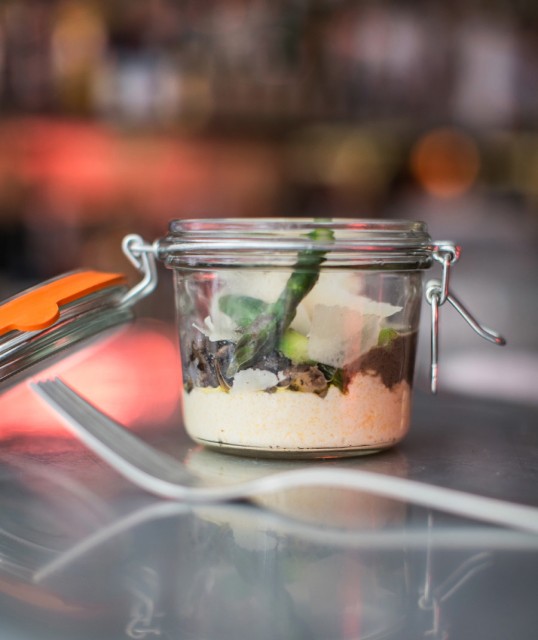 One of the star dishes, Polpo à la Papi, involves slow cooking an octopus for five hours, slicing it up and adding chickpeas, spinach, yoghurt and a touch of chili. Though the star of the show and already a signature dish is Polenta “Jerusalem style”. Originally served in Kilner jars, it now arrives in a tiny silver pot.

Lifting the lid releases an explosion of pungent truffle oil, which is weaved throughout the impossibly creamy polenta and mushroom ragout dotted with crunchy asparagus shards and Parmesan shavings. It is, as one critic put it, “death row dinner good.”

In keeping with the zeitgeist, seasonality and freshness of ingredients are important to the restaurant, which sources its meat from UK supplier HG Walter and much of its fruit and veg from local producers.

However, some of the ingredients travel from further afield: pistachios, for example, come by way of Iran, while tahini hails from Lebanon. Lemons meanwhile, are cured on site. “It’s important to strike the right balance between the quality of ingredients and sustainable practices,” says Paskin.

A number of the dishes have a playful twist – Assaf’s latest creation, salmon rillettes, is served in a sardine tin on a wooden board alongside wafer-thin bread in a toast rack. Plates are priced between £5-15 (the majority hover around the £9 mark), with a seven-course tasting menu option for £52.

On the drinks front, the wine list has been kept deliberately short both to fit with the character of the place and for practical reasons as the restaurant has limited storage space. Working with the Fields, Morris & Verdin and Ellis of Richmond among other suppliers, all of the wines on the 22-strong list are available by the glass, 37.5cl carafe and bottle, with the majority hailing from small producers.

Wine lover Layo travelled to California and personally selected the Old Stones Chardonnay 2012 from Oregon producer Bergström and The Other Guys, Moobuzz Pinot Noir 2011 from Monterrey, both of which are brought into the UK by pioneering independent merchant Roberson.

In addition to American drops, the list boasts the 2004 vintage of Lebanese stalwart Château Musar, and a Chardonnay and Syrah from Israeli producer Clos de Gat, which is nestled in the foothills of the Judean mountains. The Chardonnay spends a year on its lees and is bottled unfiltered, while the Syrah is fermented in open tanks and spends 16 months in French oak.

Completing the Israeli line-up is a Carignan from Galilee-based producer Recanati. Made with minimum intervention from grapes grown on dry-farmed slopes in the Judea hills, just 5,990 bottles of the 2012 vintage were produced, making its £60 list price on the menu very fair.

Paskin reports strong sales of both Musar and all three Israeli wines. “Our team is fired up about telling the story of the ingredients so it makes sense for them to weave the wines into that narrative. It’s great to have a few Middle Eastern wines on our list and diners have been really open minded about giving them a go,” she says.

Having only been open four months, Paskin is already thinking about a sister site for The Palomar, which will likely open in 2016. “It’s a twinkle in our eye at the moment and will probably be in London, but might end up being in Paris or Berlin,” she reveals.

Like Polpetto and Spuntino in Russell Norman’s Polpo group, the restaurant will be similar to The Palomar but will have its own name, identity and signature dishes rather than being a cookie-cutter copy. But for now, The Palomar continues to burn bright, offering one of the most exciting and intoxicating dining experiences in the capital.