Having slept in the house’s Gallo-Roman cellars for eight years, Champagne Charles Heidsieck 2005 will make its UK debut this October. Disgorged in the spring, the fizz is a blend of 60% Pinot Noir and 40% Chardonnay from vineyards in Oger, Avize, Cramant, Vertus, Mailly and Ambonnay with chef de cave Thierry Roset seeking sites that produced grapes offering freshness and acidity in order to produce a balanced wine.

The warm weather in 2005 has resulted in a “rich and generous” wine according to its maker. “The wine has all the hallmarks of a classic Charles Heidsieck vintage: great depth, balance and richness”, says Roset. “A harmonious acidity and intensity suggest the wine has a long life ahead of it. Currently it is showing warm autumnal notes of praline and lightly toasted hazelnuts, with an intense palate of dried apricots, figs and dates.”

The fourth wine to be released in the Novas range, this Garnacha/Syrah blend is a sister wine to Novas Cabernet Sauvignon, Novas Merlot and Novas Carmenere/Cabernet Sauvignon. Making its debut with the 2012 vintage, the wine is a deep ruby red in colour and offers aromas

of “strawberries elegantly combined with a light touch of spice”. The palate meanwhile, is both “fruity” and “velvety” with “soft tannins, pleasing acidity, and a long finish.” The Novas range pays tribute to astronomers of yore who used to use the Latin word “Novas” to denote the birth of a new star. Chilean estate Emiliana named the range Novas in a hat tip to the astronomers’ patient observations of the stars. All four wines are made entirely from organically grown grapes.

Bloom gin has had a pretty in pink makeover in the form of an RTD that blends Bloom with Fentimans rose lemonade, made with natural lemon juice and rose otto oil from the renowned “Rose Valley” in Bulgaria. Housed in an embossed vintage glass bottle with an oval-shaped ice pink label, the launch follows the successful release of Bloom gin and Fentimans tonic, which went on sale in 2012.

Bloom’s owner, Quintessential Brands, worked closely Fentimans on the release, with the rose lemonade chosen as a pairing partner for the gin due to its floral character, which serves to complement the honeysuckle and camomile notes found in Bloom. “Our delicate, floral gin appeals to female drinkers and this new variety will be a popular purchase for picnics and parties,” said Bloom’s international brand manager, Kate Harrison.

Uco Valley-based producer Bodegas Salentein has launched its Killka range in the UK via Majestic. Named after the Andean word for “opening”, Killka was created to act “as a gateway to the world of wine and art”.

The winery where Killka is made boasts two exhibition rooms, a wine shop, restaurant, guesthouse and chapel. According to its makers, the 2012 vintage of Killka Chardonnay offers aromas of “apples and pears, with hints of honey and vanilla”, along with a “mineral citric character” on the palate.

“We are delighted to introduce Killka to the UK”, said Salentein’s regional manager for Europe, Robert Bruijnzeels. “We aim to extend the Killka offering by introducing further single varietal wines from the range in the near future.” 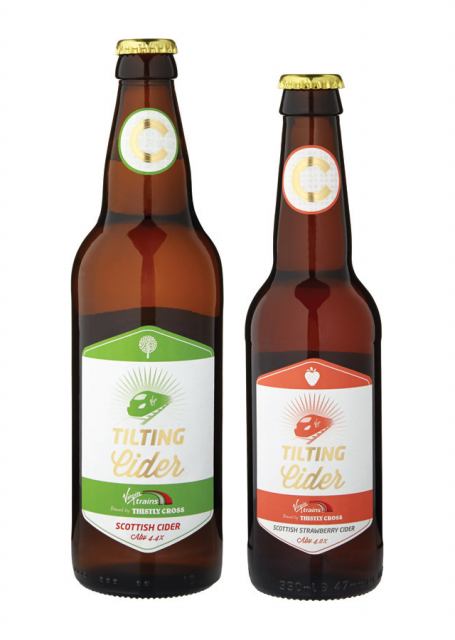 Following on from the success of last year’s launch of Tilting Ale, Virgin Trains has teamed up with Scottish brewer Thistly Cross on a pair of ciders. Made specifically for Virgin’s tilting trains, the 4.4% abv Traditional Tilting Cider is made with apples grown on and around Belhaven Fruit Farm in Dunbar.

According to its makers, the golden drop boasts “aromas of ripe fruit and clean apple finish”. Strawberry Tilting Cider meanwhile, which is complimentary for first class passengers, “has all the natural flavours of fresh strawberries with a little zing from the apples and a surprising crunch on the finish”.

With its origins in Catalonia in northern Spain, Mataro has a history in Australia’s Barossa Valley dating back to the 1850s. More commonly known as Mourvèdre and sometimes referred to as “Dog Strangler” in France, this new release Mataro from Rocland Estate is crimson in colour and offers, according to its makers, notes of “spicy mulberry and blueberry” on the nose and “dark cherry and blueberry with a savoury edge and silky tannins” on the palate, making it an ideal companion for roast lamb.

Matured in a mixture of new and used French oak, the wine is ready to drink, but will live on for five years.

Malt whisky liqueur Drambuie has launched a special edition shrink-wrapped bottle for Global Travel Retail. Aiming to attract Christmas shoppers, the limited edition release, which will preview at the TFWA World Exhibition & Conference in Cannes, will go on sale at airports in the UK, Spain, Asia and Switzerland this October. Boasting an arresting monochrome zig-zag motif, the design was inspired by Drambuie’s “A Taste of the Extraordinary” marketing campaign.

Drambuie blends aged Scotch whisky, spices and heather honey and is designed to be enjoyed neat, over ice or with mixers. The drink was first created at The Broadford Hotel on the Isle of Skye in the 1870s and was sent to the British Army during the two World Wars. In America during the ‘50s the brand became synonymous with classic cocktail the Rusty Nail.

distillate made from olives and vermouth; a Diamond Rickey featuring gin with lime and grapefruit distillates and an almond and lime falernum liqueur; the Rainy Day Spritz, made with a raspberry distillate, bitter rhubarb and a blend of vermouths; and the Bonfire Old Fashioned, made with Scotch, Lapsang Souchong tea and a dash of cola bitters. Designed by his sister Natasha, the bottles’ labels feature Ryan’s hand-drawn illustrations. The cocktails can be enjoyed chilled straight from the bottle or with mixers. 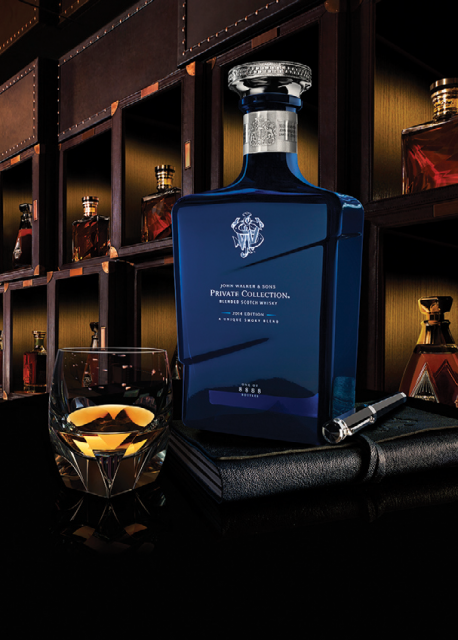 Johnnie Walker has released the 2014 edition of its John Walker & Sons Private Collection. An annual limited edition release of blended Scotch whiskies created by the brand’s master blender, Jim Beveridge, the 2014 edition blends 29 casks selected by Beveridge from his private reserves. Presented in an electric blue decanter, just 8,888 decanters will be released worldwide.

“It is a great pleasure to unveil the rich and complex 2014 edition, a sophisticated expression of the smoky characteristics from three celebrated whisky regions of Scotland: bold and peaty Islay smoke, fresh maritime Island smoke and a sweet, subtle Highland smoke,” said Beveridge, who believes the liquid offers aromas of “leather, sea salt and aromatic smoke”, along with notes of “honey, raspberries and smoky notes” on the palate.