The Somontano region of northern Spain deserves a surge in interest, not just from the discerning drinker drifting from Rioja but from the average consumer. González Byass plans to make that potential a reality.

IT’S OFTEN said that selling Spanish wine sourced from beyond Rioja’s boundaries is difficult. Because the wine from this single area is so well liked and well known, there seems little incentive for the trade or shopper to try something else. But while a more knowledgeable consumer is increasingly sampling labels from regions such as Rías Baixas or Ribera del Duero, a DO such as Somontano is still under the average drinker’s radar. And that’s a shame. Not only is this area home to some of the country’s best wines, but also a broad and distinctive array of styles, including fine examples made from old vine native grapes as well as international varieties such as Cabernet Sauvignon or Chardonnay – rarities within Spain. However, Somontano’s relative obscurity is something one Spanish wine business wants to correct.

Key findings from the masterclass
• Somontano still lies under the average drinker’s radar, despite being home to some of the country’s best wines and a broad, distinctive
array of styles.
• Spanish producer González Byass is keen to remind the trade that Somontano is ripe for discovery.
• The relatively recent French influence on the region is crucial to the character of Somontano wines.
• Established in 1984, Somontano is one of Spain’s youngest DOs and has grown rapidly from an area which only supplied the local market to one gaining international recognition and following.
• The fruit-growing potential for the region is not limited to grapes – as one of the participants illustrated with the story of 1kg tomato.

Having acquired two wineries in the region, Viñas del Vero and Blecua, González Byass is keen to remind the trade that Somontano is ripe for discovery. The company, renowned as the producer of Tio Pepe Sherry, may have wineries in Rioja (Beronia) and Cava (Vilarnau), Castilla La Mancha (Finca Constancia), and Cádiz (Finca Moncloa), but has chosen Somontano as the source region for a new brand, as well as the subject for a trade tasting and masterclass in London. Consequently in July, González Byass asked UK-based Spanish wine expert Sarah Jane Evans MW (pictured above) to present an introduction to the region, while the drinks business provided an audience of influential buyers and opinion formers.

“It’s a land of contrasts”, began Evans at the event, which was held at London’s Hospital Club, alluding primarily to the geography and climate. With the ski slopes of the Pyrenees just 40km away from the vineyards, the region is high, with cold nights and snow in winter, but its inland location ensures hot and dry summers. 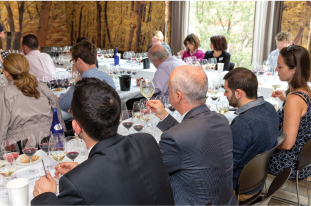 As Evans joked, “There are nine months of winter, and three months of hell.” Nevertheless, while temperatures in the heat of mid-summer can reach 35°C, they can also drop to below eight degrees as night falls, according to Evans who stressed the region’s diurnal extremes.

Then there’s its proximity to France, which, being just 60km away, explains the presence of French grapes in the area such as Cabernet Sauvignon and Chardonnay, or even Gewürztraminer, alongside the usual Spanish varieties of Garnacha and Tempranillo, as well as a few natives to the region: the white Garnacha Blanca, and red Moristel and Parraleta grapes. Although the Romans first planted vines in Somontano, Evans stressed that the relatively recent French influence was crucial to the character of Somontano wines.

Noting that the French Lalanne family had brought French grapes to the region in the 1800s, she said that the likes of Chardonnay have “a long history” in Somontano, and such grapes are integral to the character of the region’s output. She also stressed that the region is small, accounting for just 3% of Spain’s DO wine production, with a total of 4,400 hectares.

Key facts: Somontano
• In 1985, Viñas del Vero, together with other wineries in the region, established the Somontano Denomination of Origin.
• Somontono is located in the province of Huesca, part of Aragon.
• The name Somontano means “under the mountains”, as the region sits in the foothills of the central Pyrenees.
• The region’s largest city is Barbastro, which is 270 miles northeast of Madrid and 140 miles northwest of Barcelona.
• The undulating countryside, with dark, loamy, permeable soil, typical rainfall of 600mm per year, an average temperature of 12°C, harsh winters and short summers all provide perfect growing conditions to produce excellent wines.
• Somontano’s proximity to France explains the presence of French grapes in the DO alongside the usual Spanish varieties of Garnacha and Tempranillo, as well as a few natives to the region.
• The French Lalanne family brought French grapes to Somontano in the 1800s, meaning that the likes of Chardonnay and Cabernet Sauvignon have a long history in the region.
• The region is small, accounting for just 3% of Spain’s DO wine production, with a total of 4,400 hectares.
• Somontano’s most expensive wine is called Blecua, and retails for around £65 in the UK.

It’s also an area of recent expansion and development. “Established in 1984, Somontano is one of Spain’s youngest DOs and has grown rapidly from an area which previously only supplied the local market to one gaining international recognition and following.”

Today, the area has diversified significantly. “There were four bodegas in 1984, and there are now 33,” she said. Detached from the main DO vineyards, in the northernmost part of Somontano, nestles the valley of Secastilla, where seven castles once topped a series of small mountains. “Just five of them are left,” said Evans. Discovering an abandoned vineyard of amazing Garnacha bush vines, and realising the potential of the area, González Byass has carefully tended and recovered the original vineyard, and made further plantings in the area, producing a trio of wines made from indigenous varieties.

The outstanding character of this vineyard was recognised by the prestigious Grandes Pagos d’España, a collection of Spain’s finest single vineyard estates. González Byass’s other winery is the region’s flagship Blecua, dedicated to the making of Somontano’s top red wine with a selection of the best red grapes, hand picked, hand sorted and aged in the highest quality barrels. But the tasting began with something at the opposite end of the price spectrum.

This was a new sub-£10 brand from Somontano called Luces by Viñas del Vero. Evans first introduced the white, which is made from 50% Chardonnay, 30% Sauvignon Blanc and 20% Macabeo from the 2013 vintage. Fresh, relatively light, unoaked and with no verwhelming varietal character, attendees were surprised at the quality for a suggested RRP of £8. She also showed a Luces rosé made using Tempranillo, Merlot and Syrah, which, with masses of ripe strawberry flavour, and 5 g/l residual sugar, Evans said it would be “something to go with barbecued sausages.” 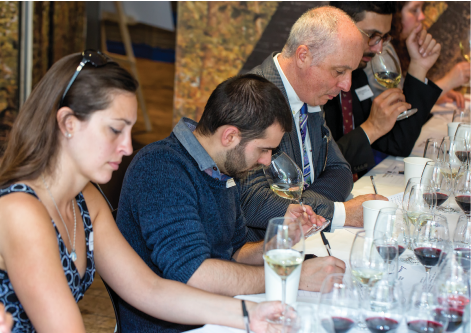 A red from Cabernet, Tempranillo and Syrah then completed the line-up, offering blackcurrant fruit and a wood influence from four months in American oak casks. Moving up market, attendees were asked to try a white Garnacha, bottled as Viñas del Vero La Miranda de Secastilla. Secastilla designates the source area, where stony hillsides and organic vineyard management are used to produce some of Somontano’s most concentrated wines, while Miranda references the owner of a particularly special vineyard, located at over 2000ft, and comprising 70-year-old bush vines, including Garnacha.

“I get really excited about Garnacha,” stated Evans, pointing out that in the ‘80s, it was the Cabernet from Somontano that elicited excitement, but today it’s the Garnacha – white and red. And particularly on trend, she added, is the Garnacha Blanca from Spain. Due to the high altitude of the vines in the La Miranda de Secastilla, the white Garnacha combines rich oily textured white fruit with a lasting freshness. Meanwhile, four months in French oak gives a note of nuttiness to the wine.

At under £12, this is a white wine of both remarkable character but also value. The old vine Garnacha Secastilla followed, with intense spicy fruit finely balanced by 10 months in new Allier oak.

“There’s now real interest in old vine Garnacha,” stated Evans, stressing the commercial potential for these wines, which were bottled primarily to capture the quality of a special vineyard.

Switching to an altogether different offering from Somontano, Evans surprised attendees with a Gewürztraminer from Viñas del Vero. With lovely lychee aromas, 13% abv and just over 11g/l residual sugar, Evans commented, “This wine says ‘I’m a Gewürztraminer’ but it has a nice mineral finish, and while it has some residual sugar, it doesn’t taste sweet.”

Continuing, she recorded, “there are just two producers in Somontano making a Gewürztraminer and this is a style that is trying to be more Alsatian. But it is still quite restrained and it would be nice with a number of different foods, including Asian dishes.” Finally, Evans treated those present to a taste of Somontano’s most expensive wine, Blecua, which retails for around £65 in the UK.

Showing the 2005 vintage, which comprised a blend of Garnacha, Tempranillo, Merlot and Cabernet Sauvignon, she said it was true to its Somontano origins in mixing the international with the indigenous.

Following 24 months in new French oak, the product, which is made at its own winery – a former Monastic retreat – is rich in tannin and fruit, but has the freshness of a fine wine. And, as though the wines from the region were not sufficient to illustrate the fruit-growing potential of Somontano, Evans turned the subject to tomatoes.

Showing those present a slide of a vast tomate rosa from a local DO bought at a street market in Somontano’s main town, Barbastro, she said it weighed 1.192 kilos. Amazingly, Evans managed to bring the pink beast back to Britain without squashing it, and assured somontano masterclass everyone that it has “an exceptional flavour”.

Continuing, she said, Somontano has “amazing cherries too… the region is not a farm of vines, there are all types of things growing there.” Summing up, she described Somontano’s wines as “exciting”, with “freshness” and “diversity”. As for the region as a whole, she said it was a “beautiful place”, and, joking, home not just to high quality grapes but also gourmet tomatoes.