LeBron James tweets about a wine made by an NFL Hall-of-Famer and social media takes care of the rest.

A single tweet inquiring about a wine’s availability would not normally make the news but when it’s from LeBron James, going out to his 15.1 million followers, and the wine in question is made by American football legend, Drew Bledsoe, you can be sure it’s going to get some coverage.

And when you’re Lebron James you don’t need to worry about such mortal trifles as tagging the recipient, you can just let the world take care of that for you.

Lebron heard about the wine on ESPN’s “Monday Night Countdown” in a segment with Rick Reilly and his tweet went out at 01:44AM this morning. 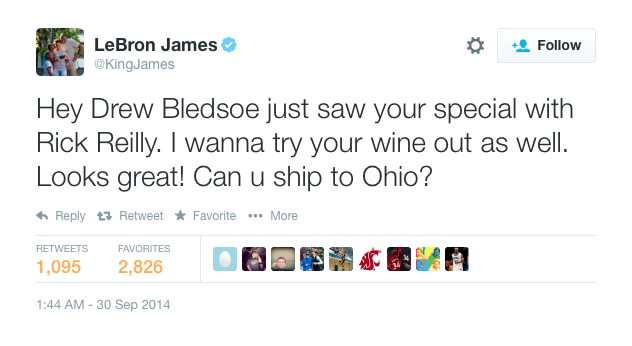 It’s already been retweeted over 1,000 times and favourited almost 3,000 times.

And it seems to be following a pattern for the former New England Patriot Quarterback’s wines, under the Doubleback label, which are made in his native Washington State’s Walla Walla County, after some good reviews in the US and a place in the Wine spectator Top 100 in their first year.

Bledsoe started working on his Doubleback estate project after his retirement  in 2007.