US Senator Charles Schumer has hit out at powdered alcohol, calling on food safety authorities to step in and ban the launch of the new product before it is approved for sale.

The senior Democrat Senator for New York claimed that the Food and Drug Administration (FDA) – the government body responsible for food safety – is refusing to investigate the new product’s alleged health risks.

In a statement released by the prominent politician, Sen. Schumer said that “Powdered alcohol is a disturbing concept and will only make it easier for minors to access, conceal and abuse alcohol.”

‘Palcohol’, the first branded powdered alcohol to seek permission for sale in the US, is currently awaiting approval from the Alcohol and Tobacco Tax and Trade Bureau (TTB).

It was initially approved by the authority, who only have powers over the labelling and taxation of alcohol products.

However, this approval was rescinded within hours as the Bureau disagreed with the amount of powder that Palcohol proposed to sell in each packet.

The new smaller-sized servings are now in-line to be approved for sale. The Senator is calling on the FDA to intervene and ban the product before it is released.

“Palcohol can be easily concealed and brought into concerts, school dances and sporting events, it can be sprinkled on food and can even be snorted,” continued Sen. Schumer.

“Given that the federal TTB can only judge and approve new alcohol products based on labelling and taxation, it’s clear the FDA must utilise their authority to intervene when alcohol products create significant health risks and stop this potentially deadly product in its tracks.” 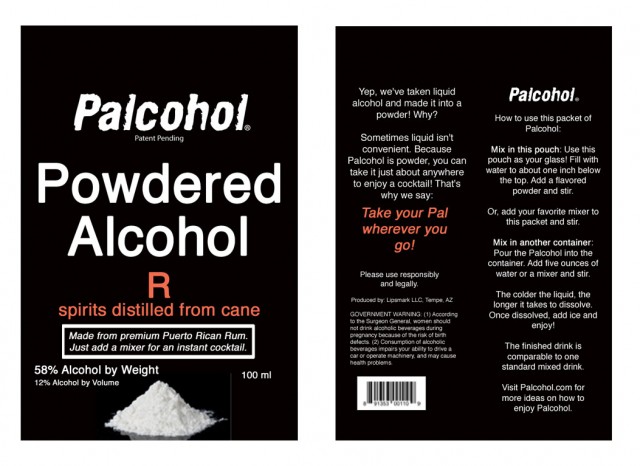 The site explains that packets can be combined with water or another liquid to create an alcoholic beverage.

“With powdered alcohol on its way to store shelves by this fall, we’re sitting on a powder keg. Clearly our food and drug safety experts must step in before this mind-boggling product, surely to become the Kool-Aid of teen binge drinking, sees the light of day,” Schumer added.

Palcohol have hit back at critics’ claims, saying: “The perceived negative aspects of powdered alcohol [are] a result of ignorance about the product.”

They say that the powder would be “painful to snort due to the alcohol”; that it is not easier to spike a drink with because unlike liquid alcohol it “does not dissolve instantly”; and it is not easier for underage consumers to get hold of as it will only be sold in licensed premises.

They have also sent a detailed letter to the Senator – made public on the company’s website – outlining the possible applications for powdered alcohol.

One example they give is for commercial use on airlines, where the lightweight and easily-stored product could save on shipping and fuel costs.