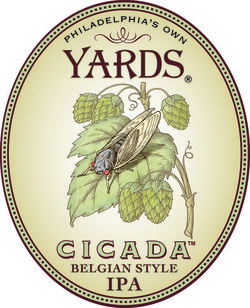 Edward Sieger, writing in Pennsylvania’s Express-Times, gave Cicada’s Belgian-style IPA a road test this week rating it 4 out of 5 calling it an “interesting” beer with notes of honey and citrus.

He said: “The flavor does kind of lay down a malty background onto which some hoppy earthiness is layered. I think that earthiness might be, in part, due to the honey. I could actually pick up notes of honey in the aftertaste, although I wonder if I would have been able to pinpoint the origin had the brewer not indicated on the label that it used honey, as it’s a very subtle quality.

“There seems to be a neat, orderly pattern to the flavors here: malty, followed by hoppy, finished with the earthy honey quality. I don’t know that I picked up too much in the way of citrus, though. Not surprisingly, I drank this out of a pint glass. I mention this because the glass was able to reveal a bit more in terms of aroma. A glass that is half or a third full allows you to really get your nose in an enclosed space and breathe deep the beer’s aroma. It allowed me to start discerning some maltiness and even some of the honey, but it was a task. The aromas are subtle.

“This is an interesting beer. The dominant flavors seem to fluctuate slightly between malty and hoppy. And you might even get a citrusy note here and there … and then the honey notes pop up. Cicada is a fairly heady brew at 8.5 percent. It offers a nice strong body, while not being overpowering.” 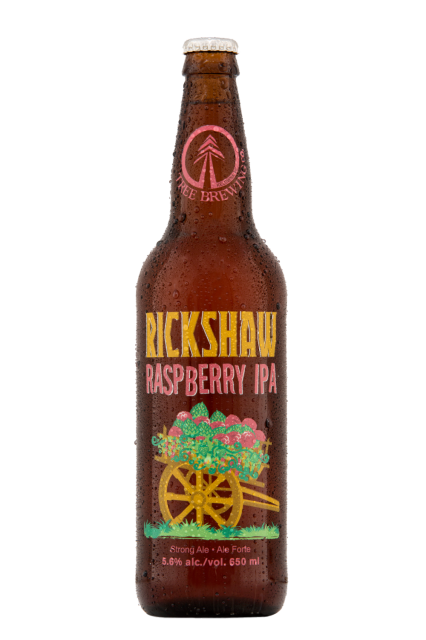 This raspberry IPA in which “the tang of raspberries interplays beautifully with the various highlights a good IPA affords” was recommended by Jan Zeschky writing in Canada’s The Province this week.

He said: “The beer pours a clouded apricot/amber colour with a pink-tinged, fairly dense and fluffy white head that laces handsomely on the glass. On the nose is a delicious, slightly creamy tang of raspberries mixed with subtle green herbal hops, above a gently sweet caramel-biscuit malt base.

“Up front in the flavour are gently sweet berries with a slightly bready, biscuity caramel malt. A creamy raspberry tang swells and melds wonderfully with the greener, herbal hops as a sturdy bitterness (64 IBU worth) blooms centre mouth. The creaminess remains on the tongue as a gentle dryness develops in the finish. Light, creamy berry notes continue in the aftertaste.

“It’s a beer full of understated subtlety; not too sweet, bitter or rich, but excellently balanced.”

This Smog City Porter, with an added kick of coffee, was recommended by John Verve in the LA Times, who explained that the “rich, roasted flavors of porters and stouts” were a natural match for the flavours of coffee.

He said: “One standout local example of the marriage of bean and barley is the chocolate-hued Coffee Porter from Torrance’s Smog City Brewing Co. Each batch of the robust porter is cold-infused with nearly 100 pounds of fresh beans from the local Groundwork Coffee roaster (once known as Groundwork Coffee Porter; only the name, not the recipe, has changed), and you can smell every last bean in the bottled beer. It smells like a batch of coffee still warm from the roaster. The flavor is equally coffee-forward with a harmony of subtle cocoa and caramel notes. A touch of acidity suggests an iced cup of cold-brewed coffee, and the creamy, weighty mouth-feel ensures that the flavors linger on the tongue. Each sip finishes with all the bitterness of a cup of joe, but there’s a pleasant and very subtle woody hop character under all those roasted flavors that rounds out the brew.

“There is a lot of flavor packed into Coffee Porter, but the 6% alcohol brew isn’t overpowering. It is balanced and drinkable, and it’s versatile with food, from barbecue to mole to all manner of desserts.” 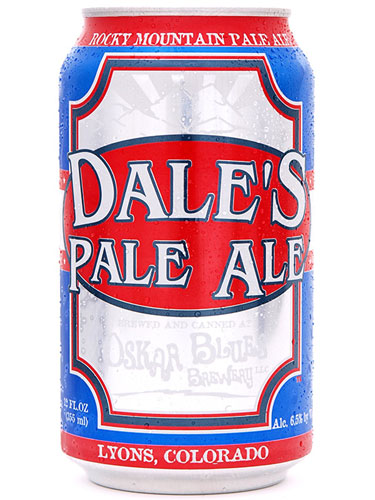 Natasha Gardner had high praise for Oskar Blues Brewery’s Dale’s Pale Ale which she playfully called a “phenom”, writing in the 5280.com Denver Magazine, urging it to be declared the state beer of Colorado.

She said: “This copper-hued beer pours out with a thick, lacey head. However, I prefer to consume it from the can, because that’s the way I first tasted it and tradition is important. This brew isn’t shy; you’ll immediately be overtaken by the hops. Give it another sip, though, and you’ll notice a solid malt base, which helps balance this bombastic brew. Take another drink and you’ll start to pick out citrus flavors (mostly lemon, then orange).

“While you often hear about beer and food pairings, when it comes to Dale’s, I think about activities. Pair it with a hike, a steak dinner at Edge Restaurant & Bar, or a backyard BBQ. It is an ultra versatile beer that will do you well all year long.

“Would we buy it again? Always. (Can you tell I like this beer?)” 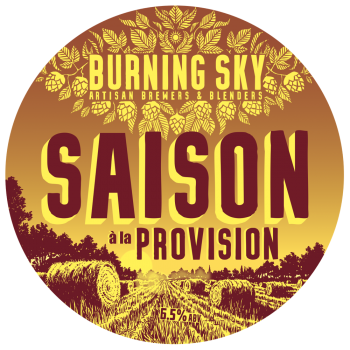 “I think we can all go home now – I might have found my Summer beer of 2014”, declared Maxine Gordon, writing in the York Press this week, talking about Burning Sky’s Saison. Burning Sky, a brewery set up in East Sussex by Mark Tranter, former head brewer at Dark Star, was set up with the intention of producing “great farmhouse, barrel-aged and blended ales”.

She said: Pouring cloudy, pale copper, with a huge white head driven by a sparkling effervescence, it certainly gives the appearance of a rustic saison on first impressions. The nose follows suit: sharp, rustic scrumpy, with a faint wisp of lemon sherbet acidity and gooseberry jam.

“The mouth-feel is dense yet dry, with a prickly carbonation on the tongue. An initial sappy flavour develops into dry, oaky vanilla, frangipane, and coconut cream. Cider, sour and rounded, rises in the mouth backed by a note of white wine, sweet and sharp, and verdant bitterness.” 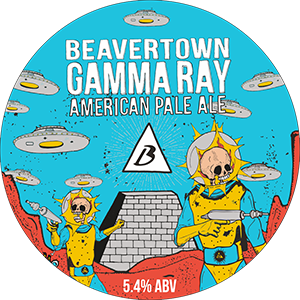 UK drinks writer Jamie Goode recommended a number of beers from London-based craft brewer Beavertown writing on his Beer Anorak blog this week. Their name comes from the area of Hackney in which the brewery is based, De Beauvoir Town, an area Goode said was known for its bars in breweries in Victorian times.

He said: “The brewery was established by Logan Plant and Byron Knight in 2011, and in 2012 they opened a brew pub, Duke’s Brew & Que. Everything I have tried from them so far has been excellent.

Of this offering he said: “It’s beautifully aromatic, floral and tangy, with grapefruit and herbs in the mix, too. It has a lovely savoury, tangy palate with grapefruit, lemon and spice. Real precision and focus here. 8.5/10” 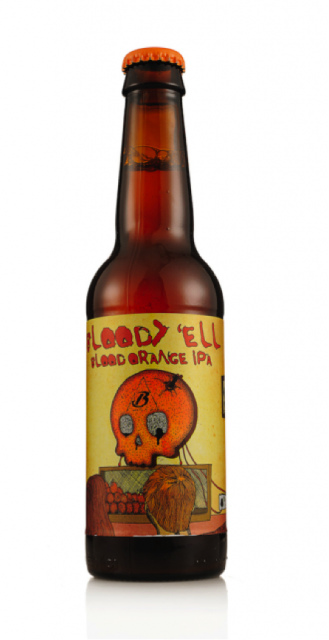 Chris Morris, writing for New Jersey’s nj.com, recommended Terapin’s turtle-themed Hopsecutioner IPA – a beer which he said was “all about aggressive citrus and pine hops” balanced on top of a “semi-sweet, caramel body.”

He said: ” Hopsecutioner pours a dark amber with a white head that leaves a stick white lace. The aroma screams IPA. Huge, juicy hop notes of citrus, apple, and pine, with a touch of sweetness to back it up and a hint of warm alcohol.

“Like most great IPAs, the taste follows the aroma perfectly. Sweet malts meet the tongue first with that bit of caramel backbone. But it doesn’t take long for juicy, citrusy hops to come into the mix, followed by pine, all with a nice bitterness. The finish is a bit dry, but it remains inviting for another sip. The medium body and crisp carbonation compliments the hoppy, citrusy flavors, making for a really good mouthfeel.”

“Overall, this is a standout IPA that doesn’t seem to get too much recognition in the craft beer world. Much like a Sculpin, West Coast IPA, or Enjoy By, this beer is intensely hoppy, but without being overly hoppy, and that isn’t easy to do.” 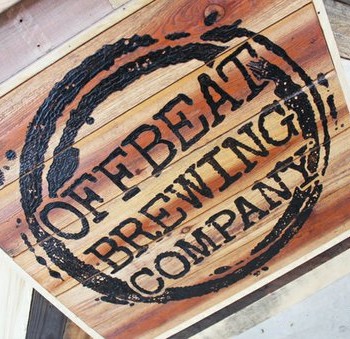 He said: “Coming in at 4.5% alcohol-by-volume, it’s a good hot weather choice since oppressive heat — a constant in Escondido from July through September — can make high-alcohol imbibing sessions dangerous to one’s health. And because it’s both crisp and hoppy (81 International bittering units), it fulfils the need for a potent IPA without the girth and mind-bending qualities that come with most West Coast-style versions of this style.” 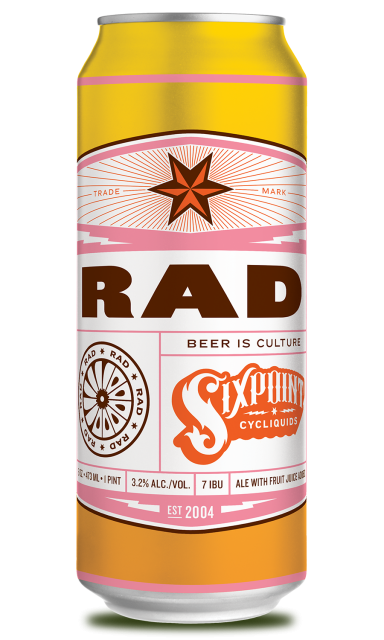 Finally Nick Anderson, writing at Virginia’s arlnow.com, highlighted a selection of summer seasonal beers including Sixpoint’s RAD – a fruity “shandy” developed for cyclists which comes in at 3.2%.

He said: “Autumn is often citied as the favorite season for beer fans, but over the past few years I’ve been increasingly won over by summer beers. Summer beach hangouts, cookouts, parties, and other get-togethers necessitate the light, flavorful character of Summer Ales, which are built to refresh and generally lower in ABV percentage. Yes, fall beers may be arriving early, but there are still some great summer beers for folks like me looking to hold onto the season just a little bit longer.”

He said: “Sixpoint RAD: Radler — essentially a version of Shandy developed for bicyclists (the word radler translates as “cyclist”) in German-speaking countries by mixing beer and soda–isn’t for everyone, but I love it so I was intrigued when Brooklyn’s Sixpoint brewery announced they were going to put a version of its own on the market. Using a fruit juice blend instead of a soda, RAD is a unique take on a distinct style; one I appreciated as an alternative to a Light Lager or sugary soda.”