Focusing on the vibrant cities of Singapore and Hong Kong, we hone in on 10 prime venues where aficionados of Burgundy (and good food and views) are spoilt for choice. 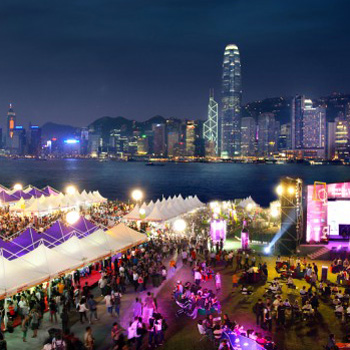 With Burgundian producer Nicolas Potel predicting a “real and beautiful” future for Burgundy in Asia, particularly in the on-trade, we round up some of the best places to get your lips around a Gevrey-Chambertin, Pommard and even white Beaujolais.

Although there are a limited number of venues offering much Burgundy by the glass, many more than make up for it with a by-the-bottle (and occasional carafe) line-up that would make even the most hard-bitten Pinotphile swoon.

So here are, in no particular order, the best places to drink Burgundy in Hong Kong and Singapore.

Scroll through for some of the cities’ top Burgundy sipping spots… 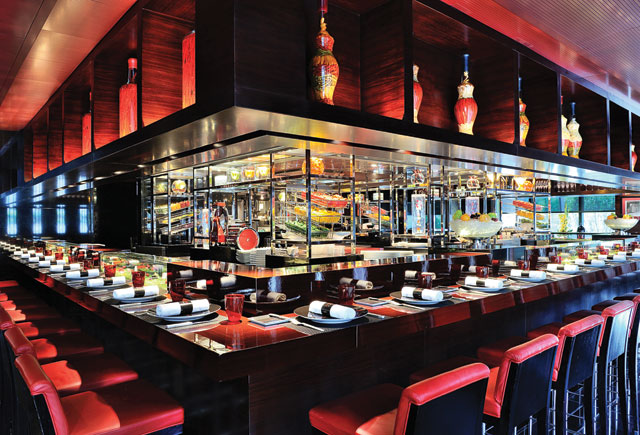 A restaurant where 2007 Meursault Charmes from Faiveley and 2006 Volnay Clos des Ducs by the Marquis d’Angerville can be ordered by the glass has to make the cut, surely? Indeed, if any restaurant on these pages deserved a “number one” spot, it might have to be this one.

The entire wine list is spectacular (it has more than 3,000 wines on it), with the first few pages of the Champagne section dedicated to Dom Pérignon Oenothèque back to the 1960s, magnums of DP rosé from 1982, eight vintages of Bollinger’s Vieilles Vignes Françaises going back to ’82, and several vintages of Krug’s Clos du Mesnil and Clos d’Ambonnay.

There’s almost an entire page given over to (white) Ermitage and Hermitage from Chapoutier and probably one of the most expansive lists of German Auslese and Beerenauslese, and even Trockenbeerenauslese, in Asia-Pacific. The white Burgundy section spans 10 pages, the reds nearly 20. 1947 Montrachet from Roland Thévenin, 1978 DRC Montrachet, Marquis d’Angerville, Jean Grivot, Henri Jayer, Georges de Vogüé, Roche de Bellene, Roumier, Drouhin, Moine-Hudelot, Leroy, Mugnier, Gros, Hudelot-Noëallat, Dominque Laurent, Girardin… the list goes on, so much so it’s almost too much. If you like Burgundy though (and have a fair bit of spare change in your back pocket), it can only be described as seventh heaven.

This three-Michelin-starred restaurant in the more salubrious and increasingly trendy part of Wan Chai is overseen by head chef Jonay Armas and boasts a “Wine Atlas” rather than mere wine list.Covering whites from Cyprus, the Lebanon and Romania, rosé from Greece and even red Côteaux Champenois, it does live up to its name. 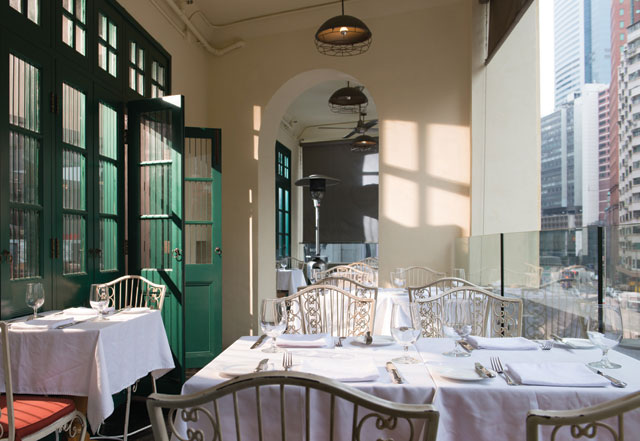 Another Wan Chai favourite (and owned by the same group as The Principal) spread over several storeys in one of the few remaining colonial buildings in the city, The Pawn offers classic British food as well as fine dining on the second floor and a rooftop terrace. Bad boy UK chef Tom Aikens is coming on board to help redesign the menu while The Pawn undergoes a refurbishment between July and October.

With a smaller selection than others on this list, but no less distinguished, diners can tuck into some well-priced whites in particular with Saint-Romain, Bouzeron, Meursault and Puligny Montrachet from the likes of Deux Montille, Domaine de Villaine (yes, him), Vincent Girardin and Alain Chavy; impressively, all for under HK$1,000 a bottle.

The reds up the average price somewhat but include gems such as 2005 Clos de Vougeot from Nicolas Potel, 2005 DRC La Tâche, Domaine Dujac’s 1990 Charmes-Chambertin and 2008 Morey Saint Denis from Domaine des Lambrays. 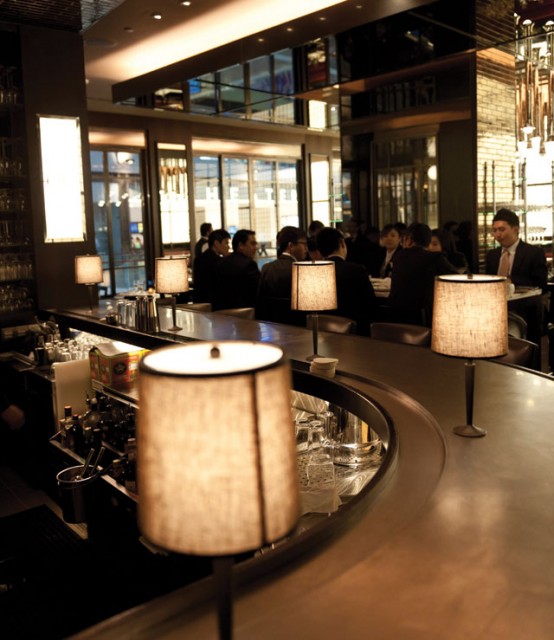 The first Singaporean venue on the list and one which offers up Daniel Boulud’s trademark offering of French cuisine with a distinct American twist. It’s also a place where Burgundy-lovers can order Paul Pernot’s 2011 Puligny-Montrachet, Les Folatières and Christian Serafin’s 2002 Gevrey-Chambertin Fonteny for S$48 and S$100 a glass – all served from Coravin and part of a “Sommelier Selection” that rotates (2007 Palmer is also available for S$110 a glass).

The white Burgundy selection spans Chassagne-, Puligny- and Bâtard-Montrachet, premier cru Chablis, two vintages of de Villaine’s Aligoté from Bouzeron, Mâcon, and even a rare white Beaujolais from one of the region’s top producers, Jean-Paul Brun.

The reds have a particular slant towards the Côte de Nuits with Ponsot and Armand Rousseau’s Clos de la Roche, and Gevrey-Chambertin from a variety of producers, crus and vintages, but there are also some tempting finds from the Côte de Beuane and the first real stab at Beaujolais as well, with more from JP Brun, Brouilly from Jean-Claude Lapalu and Morgon from Marcel Lapierre. 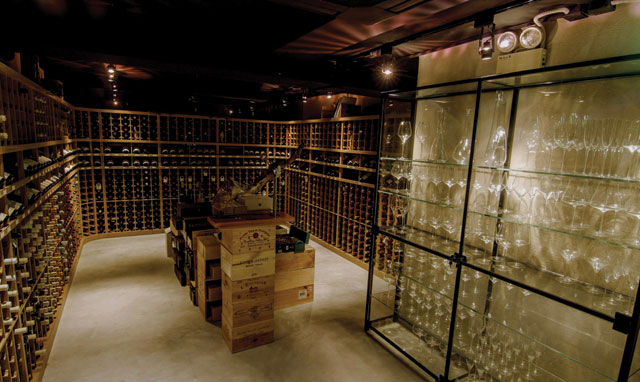 Back to Hong Kong and to the trendy, “boho”, “bobo”, area of Soho. Nocturne is a wine and whisky bar which doesn’t stint on its Burgundy offering either. With Meursault from Comtes Lafon, Puligny-Montrachet from Jacques Prieur, Paul Pernot and Leflaive, Chassagne-Montrachet from Le Moine, multiple Chambertins from Armand Rousseau, Chambolle-Musigny from Denis Mortet, Romanée-Saint-Vivant and Vosne Romanée from Jacky Confuron, Jean Grivot and Mongeard Mugneret to name but a few.

The Nocturne whisky menu is worth checking out too, particularly for fans of Japanese malts. 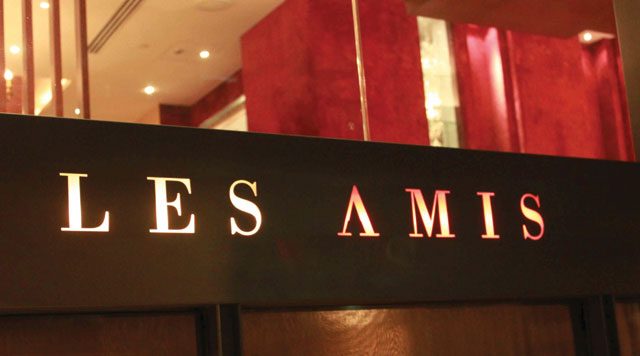 A Singaporean venue that is a veteran in the fast and cut-throat world of Hong Kong and Singapore fine dining, having first opened its doors in the early 1990s. With pages 8-15 on the list given over to white Burgundy and 37-54 dedicated to the reds, the sheer scope and depth of Burgundy is something best left to the imagination and it includes all of the names one would expect from a comprehensively compiled wine list.

Strangely, only two Burgundies are available by the glass – 2009 Pouilly-Fuissé from Château Fuissé, and Rossignol Trapet’s 2010 Beaune premier cru Teurons. Those after bottles, though, can select Roulot’s 2007 Meursault Les Meix Chavaux for S$270, Leflaive’s 2005 Puligny-Montrachet Les Folatières for S$450, Thibault Liger-Belair’s 2008 Clos Vougeot for S$230, and 1999 Domaine Ponsot Chapelle-Chambertin for S$455 in the sommelier selection. 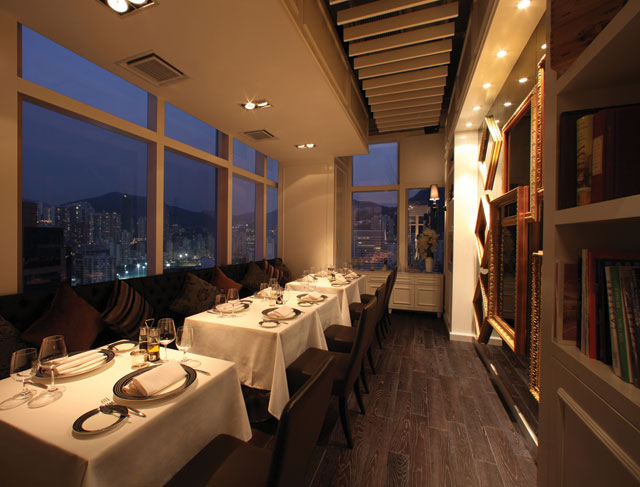 A return to Wan Chai for the third recommended Burgundy hot-spot. As its name would suggest, Amuse Bouche serves up traditional French cuisine and its wine list is similarly dominated by the best of France’s fine wine.

It boasts a particularly extensive Burgundy list filled with grand and premier cru whites from the likes of Paul Pernot, Bonneau du Martray, Jean-Marc Morey, Domaine Ramonet, Domaine Dujac and Daniel Rion & Fils; while the reds again have a slant towards the Côte de Nuits with Clos de Bèze from Prieuré Roch and Bruno Clair; Chambolle-Musigny from Dujac, de Vogüé and Jean-Jacques Confuron; and six vintages of DRC La Tâche going back to 1990 alongside multiple vintages of Richebourg, Romanée-Conti and Romanée-Saint-Vivant. Offering a 270° view of Hong Kong and with space for just 60 diners, Amuse Bouche offers both a spectacular backdrop and an intimate setting in which to enjoy your favourite appellation – or two. 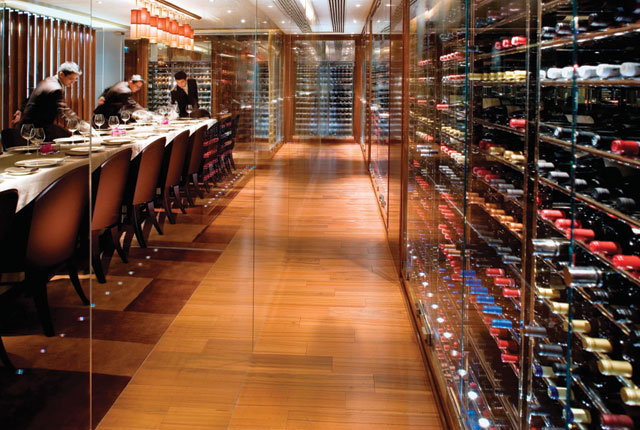 The first (of several) restaurant-bound venues, Amber at The Landmark Mandarin Oriental serves up a “contemporary interpretation” of French cuisine under head chef Richard Ekkebus.

Burgundy-lovers can enjoy 2009 Aligoté from Domaine Leroy or 2003 Corton white and 2007 Corton red from Chandon de Brailles, either by the carafe or glass. For those wanting rather more, once again there’s a fine selection of Côte de Nuits with Hudelot-Noellat’s 1996, Denis Mortet‘s 1995 and Jean Gros’s 1993 Clos de Vougeot; there are Clos de la Roche back to 1997, Latricières-Chambertin to 1990, 1972 Clos Saint-Denis and lots of Vosne-Romanée and Echezeaux from Henri Jayer.

The wine list also has a fine line-up of Piedmont and Tuscan wines. 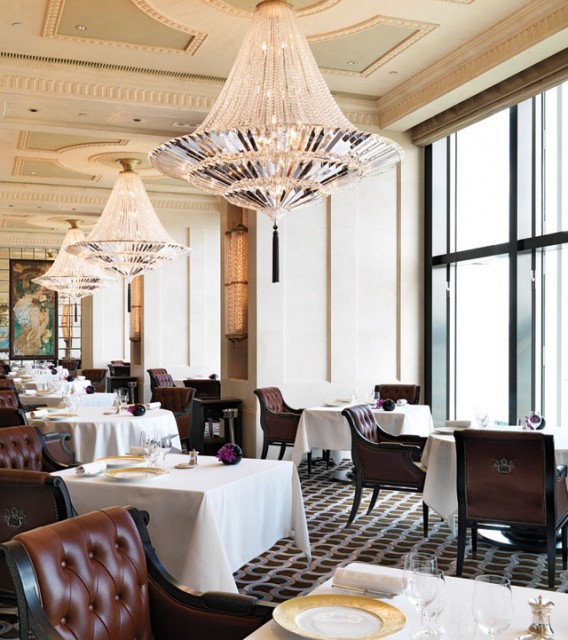 To the Four Seasons, which actually has no less than three bars and restaurants that came recommended from Burgundy.

Anyone passing their time might pop into the Blue Bar or Lung King Heen for a good glass of wine and view over Victoria Harbour.

Those wanting a more serious experience though should head to Caprice, home to Hong Kong’s first cheese cellar and an extensive selection of French wines in its cellar.

Like many a list in a leading city restaurant, the extent of the selection is too wide to do justice here but includes any and every top producer one could hope for — and the view’s nice too. 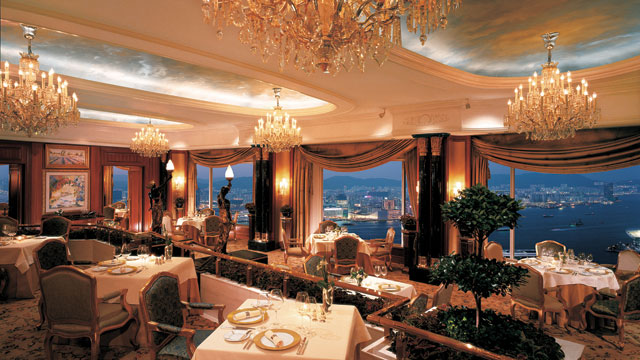 This Island Shangri-La restaurant also comes with another smaller bar that comes highly recommended for Pinot and Chardonnay fans. Lobster Bar on level six is a more relaxed bar and grill, albeit with a nice (if small) selection of Burgundy.

True aficionados need to go all the way to level 56 if they want to indulge in even more spectacular views and, of course, serious wine. True to its name, Pétrus boasts a list of back vintages of the super-star Pomerol estate, dating back to 1928 in fact (if you can spare HK$397,000 for a magnum, that is).

But its Burgundy selection is not to be sniffed at either. The white selection spans Chablis to Viré-Clessé, while its reds give more space to the Côte de Beaune than most, with Aloxe-Corton, Chorey and Savigny-les-Beaune, Pommard, Volnay (from Marquis d’Angerville predominantly), Monthèlie and Santenay.