Queen Elizabeth II christened the Royal Navy’s newest aircraft carrier with a bottle of whisky at the dockyards of Rosyth last Friday. 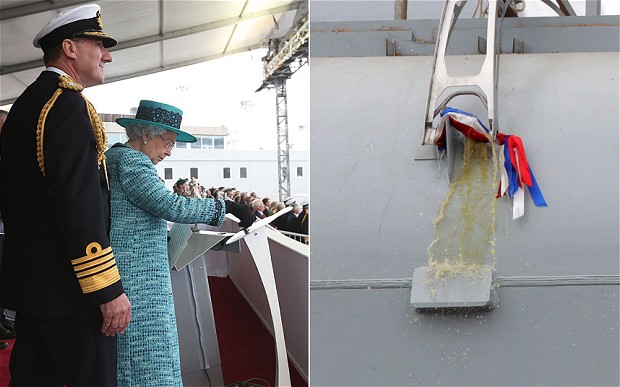 At 65,000 tonnes and nearly 300 metres long,tThe aircraft carrier is the biggest ship ever commissioned into the service.

Named HMS Queen Elizabeth in honour of the sovereign, her sister ship HMS The Prince of Wales is still under construction in Rosyth.

The combined cost of building the two giant ships is over £6bn.

The Queen christened the new vessel, as is traditional, with a good dousing of alcohol – in this case a bottle of Bowmore, the first distillery the Queen ever visited back in 1980.

It was chosen from among the wide array of Scotch distilleries by the Worshipful Company of Distillers which donates to Royal Navy charities.

Addressing the crowd at the launch ceremony, the Queen described the eponymous ship as “innovative and first class”.

“In sponsoring this new aircraft carrier, I believe the Queen Elizabeth will be a source of inspiration and pride for us all,” she said.

“May God bless her and all who sail in her.”