Increasing disposable incomes will help China overtake the US as the world’s largest beer market by 2017 , according to Euromonitor analysts. 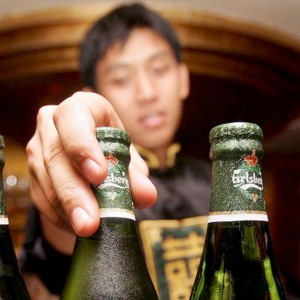 China is already the largest market in terms of volume.

However by 2017 it will take over the US in terms of value sales, as reported by CNBC.com.

Amin Alkhatib, alcoholic drinks analyst at Euromonitor, said the boost to China’s beer economy was in part due to increasing disposable incomes, which are predicted to continue to grow into 2018.

This, coupled with the faster pace of growth to the country’s legal drinking age population over the US, will mean beer sales will continue to rise.

Alkhatib said: “As these new consumers’ incomes increase and macroeconomic conditions improve, brewers will also be able to encourage consumers to trade up.”

An increasing popularity of premium beers over cheaper alternatives is also said to be pushing up value sales – highlighting the potential for growth in the premium beer segment which is still a great deal smaller than in the US.

Alkhatib added: “With ever increasing affordability both within and beyond urban centers, and with the increasing penetration of retailing channels, global brewers can capture a consumer base in provincial China that was previously beyond their reach.”

Earlier this month an online Chinese retailer claimed to have sold more than 30 million cans of beer during the recent 2014 Fifa World Cup.