A guest at a bar in Lithuania suffered horrendous injuries after a bartender accidentally set his face on fire. 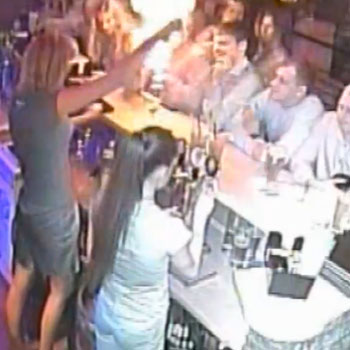 guest was set alight as a bartender attempted to make a drink called the Flaming Lamborghini.

The horrifying incident was caught on camera by the bar’s CCTV camera which has since been posted at LiveLeak.com.

As the bartender pours the flaming drink from a height, alcohol splashes onto the patron’s face, dousing him in flames and leaving him with horrific burns to his face and head.

It is understood that none of the staff working were able to give medical attention.

Shockingly, the footage shows bartenders returning to pulling pints just seconds after the incident, instead of helping the badly burned guest.

The incident is a warning to bar owners to ensure staff are trained properly when mixing drinks of this nature, and that at least one member of staff is equipped with first aid training.