A wine cup believed to have been used by the ancient Athenian statesman, Pericles, has been found in a north Athenian suburb. 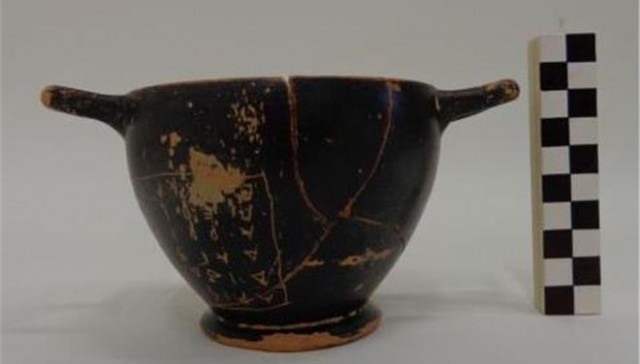 The eight centimetre high cup was discovered earlier this week during construction work in the suburb of Kifisia, according to local paper Ta Nea.

Broken into 12 pieces archaeologists found that there were six names scratched into the cup in apparent order of seniority, with none other than Pericles’ name and the name of his elder brother, Ariphron, listed along with Aristides, Diodotos, Daesimos and Efkritos.

“Having it listed above that of Pericles makes us 99% sure that these are the two brothers.”

To add further credence to the idea, Kifisia, a wealthy suburb and home to many of Greece’s modern politicians, is not far from the suburb of Cholargos where Pericles was born.

In dating the cup, experts think that Pericles would have been in his mid-20s at the time. The six men listed may have been drinking at a wine symposium together – goes one theory – and were clearly feeling the effects.

Whoever wrote Pericles’ name made a mistake and had to correct it. The cup appears to have then been offered to someone called Drapetis (“escapee” in Greek) who was either a freed or runaway slave and possibly a tavern owner.

The cup will go on display at the Epigraphical Museum in Athens this autumn.

Pericles was one of, if not the, most influential and important figures in classical Athens during its “Golden Age” in the fifth century BC.

Born in 495 BC, he went on to become a reliable admiral and general for his city fighting in many wars and campaigns against other Greek states and the Persians.

During his leadership of Athens from 461 BC until his death in 429 BC, he helped foster Athenian democracy and pushed for the construction of many of the great buildings on the Acropolis – most famously the Parthenon.

Having helped initiate the Peloponnesian War in 431 BC, he died of the plague with Athens invested by Spartan forces.

Ironically, the cup was discovered on Sparta Street.