Troops from the Vietnamese and Philippine navies shared beer and food and played football on an island in the South China Sea claimed by China. 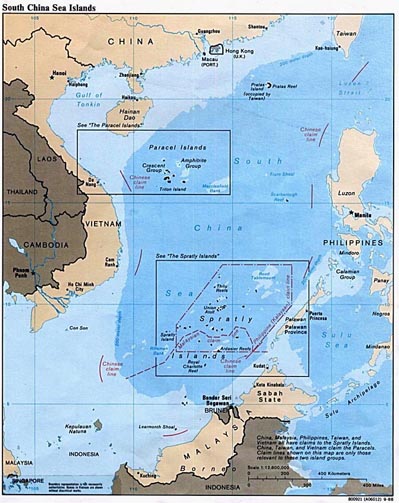 The island in question, Southwest Cay, is a part of the Spratly archipelago and claimed by Vietnam though recent Chinese claims in the area place it in Beijing’s sphere of influence.

According to First Post, the troops played football, volleyball and held tug of war matches while swapping beer and food.

What beers were exchanged is not reported but the Philippines is home to one of Asia’s largest and oldest breweries, San Miguel which has subsidiary breweries across the region (including in Vietnam and China), while Vietnam has a strong brewing industry led by brands such as “Saigon”.

The visit by the Philippine navy was described as a chance to showcase more harmonious relations between two countries in an increasingly fractious region.

“This serves as a model of cooperation for other navies to emulate,” the two navies said in a joint statement.

On the other hand, as the Philippines is similarly embroiled in a spat over territorial waters with China, the “cultural exchange” is more likely to be viewed in Beijing as a display of mutual support.

Vietnam, China and Taiwan all claim the entirety of the Spratly chain, while the Philippines, Malaysia and Brunei claim small portions.

Nonetheless, it is thought that several smaller nations are putting aside former differences and are being forced into closer co-operation in the face of increasingly bullish Chinese claims in the region.

China currently lays claim to 90% of the South China Sea (called the “East Sea” in Vietnam), an area of over 3 million square kilometres.

The Chinese claim is laid out in what is commonly referred to as the “nine dash” line and which conveniently encapsulates the gas and oil fields down towards Malaysia, the Philippines and Vietnam.

The Philippines and China came to verbal blows last month as well when the Philippine coast guard arrested several Chinese fishermen they claimed were illegally fishing for turtles in Philippine waters.