The 2022 World Cup could be hosted in Scotland, if craft brewers BrewDog have their way. 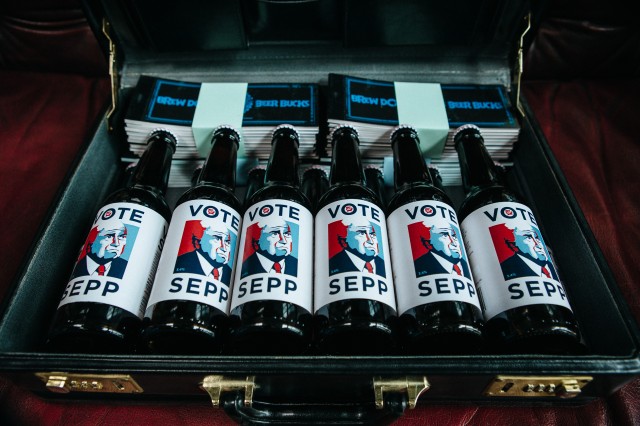 The controversial brewery today unveiled a new beer entitled ‘Vote Sepp’ in an attempt to “sweeten the deal” and convince the FIFA President to host the 2022 World Cup in their native Scotland rather than Qatar.

Its release comes amid accusations of bribery and corruption within FIFA over its consideration of Qatar as a host country, with some questioning its ability to host the 2022 competition.

The 5% beer, believed to be the industry’s first craft beer bribe, will be served at BrewDog bars from brown paper bags “to aid drinking with greased palms”, with its label featuring an image similar to that of Barack Obama’s 2008 campaign posters.

James Watt, BrewDog co-founder, said: “Vote Sepp marks the official launch of our unofficial bid for Scotland to host the World Cup 2022. We know the event was awarded to Qatar, but once President Blatter has a sip of this incorruptible hibiscus wit beer, we’re sure he’ll come around to our way of thinking.”

“There are so many benefits to hosting it in Scotland. Unlike Qatar, there would be no concerns over people overheating during the summer in Scotland and with the hosts guaranteed a place in the tournament, we could finally see the Scots make an impact.”

A case of the beer has been sent to the FIFA President in Zurich, along with an invitation to discuss their bid at the BrewDog bar in Sao Paulo, which opened this year.

Watt added: “BrewDog is built on integrity and passion, and since we launched in 2007 we have been sticking two fingers up to the institutions that threaten those values. Whether it is corrupt establishments controlled by greedy gatekeepers, policies that threaten civil liberties, or the stranglehold the mega breweries have had on beer production over the last 50 years, we’ve always aimed to put the embarrassing status quo under scrutiny. Vote Sepp is part of that tradition.”

It is not the first time that BrewDog has launched a beer designed to stir up controversy.

During the Sochi Winter Olympics in February 2014, the brewery launched and anti-Putin beer in protest against Russia’s laws on homosexuality called “Hello My Name is Vladimir.”

Its label featured a Warhol-style image of Putin and carrying a warning that the beer was “not for gays” and “may contain traces of sarcasm”.

Earlier this year, the brewer launched an attack on The Portman Group after it banned its Dead Pony Club Ale, branding it “a gloomy gaggle of killjoy jobsworths”.