A new distillery aiming to be England’s largest combined producer of whisky, gin and vodka moved a step closer to production this week with the delivery of three handmade copper stills. 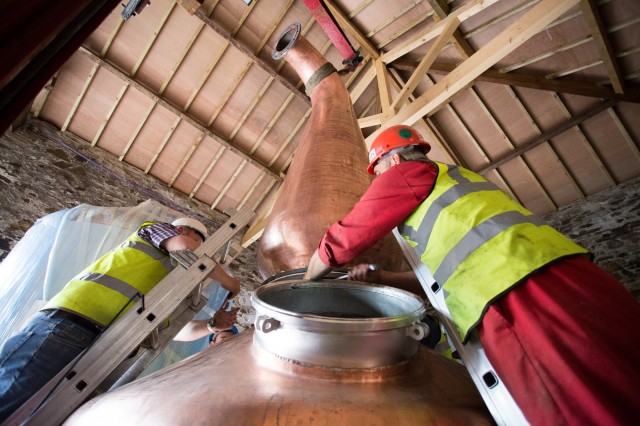 The Lakes Distillery in Cumbria ordered the wash, spirit and gin stills from specialist manufacturer McMillan near Edinburgh. With a capacity of 5,500 litres each, these will enable the distillery to produce one million bottles of single malt whisky each year, as well as gin and vodka.

Located on the shore of Bassenthwaite Lake, the £5 million distillery uses water direct from the River Derwent, which it claims boasts “an ideal pH level” and an “exceptional” turbidity, or clarity, of 0.6.

Confirming a plan to begin production of The Lakes Single Malt in September, founder Paul Currie said: “We have paid great attention to the plant installed in the distillery to ensure the very highest quality of our spirits. We have also introduced a number of innovations to the process which are at the cutting edge of distilling and will be the first distillery to use both copper and stainless steel in our distilling process which we believe will develop a malt with a greater character.”

The company is offering 60 people the chance to sign up for its Connoisseurs Club. In exchange for £12,000, members will receive their own Sherry cask, equivalent to around 100 bottles, which will be filled from the first distillation of The Lakes Malt.

In addition, the first 100 casks of single malt whisky will be set aside for members of the producer’s Founder Club. Up to 2,975 applicants each paying £595, will receive a 70cl limited edition bottle every year from 2015 for 10 years, along with two miniatures.

The Lakes Distillery will join a growing band of English whisky producers, including Adnam’s Whisky in Suffolk, which released its first whiskies at the end of 2013; the Cotswolds Distillery, which is also due to begin production this year; and the English Whisky Company, which is now exporting its product to the US.