Following on from our round up of writers and their favourite cocktails, we now delve into the drinking dens some of the most influential writers of the last century used to frequent, from existentialist duo Jean-Paul Sartre and Simone de Beauvoir, who were so faithful to Les Deux Magots in Paris that they were given their own table, to the White Horse Tavern in Manhattan where Welsh poet Dylan Thomas famously downed the 18 shots of whisky that led to his untimely demise.

Many of the haunts in our chosen 10 served as literary salons for emerging groups of the time, with Beat Generation writers Jack Kerouac and Allen Ginsberg convening at Café Vesuvio in San Francisco and the Inklings, led by C.S. Lewis and J.R.R. Tolkein, meeting on Tuesdays in a private lounge at The Eagle and Child in Oxford, which they affectionately dubbed The Bird and Baby.

As is customary, if we’ve missed off a literary classic then let us know in the comment box below.

Founded by County Wicklow-born publican Davy Byrnes in 1889, this Dublin watering hole shot to fame in 1922 when it was immortalised in James Joyce’s magnum opus, Ulysses, which chronicles protagonist Leopold Bloom’s passage through Dublin during an ordinary day – 16 June 1904. Joyce allegedly chose that specific day for the novel as it was the date of his first romantic liaison with wife-to-be Nora Barnacle.

A regular of the pub and a friend of its proprietor, Joyce weaved Davy Byrnes into the novel, where Bloom stopped by “for a gorgonzola sandwich and a glass of Burgundy.” The hat tip to the pub has led thousands of Joyce fans to make the pilgrimage to the site on Duke Street, with a spike in visitors on Bloomsday (16 June), where Joyce’s more fervent fans pop in for a gorgonzola sarnie and a glass of Burgundy in honour of Bloom. 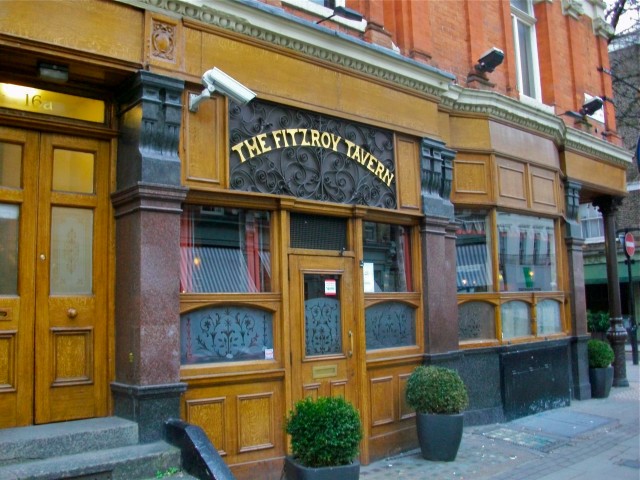 Nestled on a corner of Charlotte Street in Fitzrovia, after which the pub takes its name, the Fitzroy Tavern has gained a reputation for its literary links, with it serving as a melting pot for artists, writers and intellectuals in the 1920s much in the same way as Les Deux Magots in Paris became a petri dish for artistic thought and literary endeavor.

Among some of the watering hole’s more famous former patrons are Welsh poet Dylan Thomas, Welsh painter Augustus John and, most famously, 1984 writer George Orwell. Starting life as a coffee house in 1883, the building was turned into a pub – The Hundred Marks – four years later.

The haunt didn’t adopt its current guise until 1919. In honour of its famous guests, the tavern boasts photographs Thomas and Orwell on its walls, the former snapped drinking at the bar. Since the ‘80s, the pub has been a regular gathering place of Dr Who fans, who meet there on the first Thursday evening of each month. 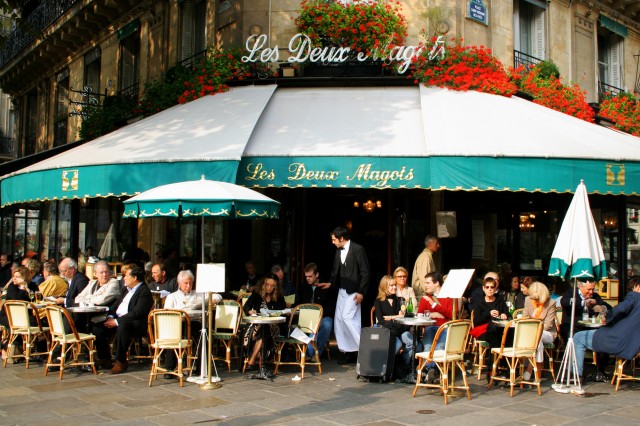 Located in Paris’ chic Saint-Germain-des-Près district, Les Deux Magots became famous in the 1920s as a hangout for artists, writers and intellectuals, including Albert Camus, Ernest Hemingway, Pablo Picasso and existentialist writers and on/off lovers Simone de Beauvoir and Jean-Paul Sartre, who made the haunt their headquarters. So loyal were the pair to the café that they had their own table, which they would write at nearly every day.

The café takes its name from a lingerie shop on the Rue de Buci, which itself was named after a 19th century play, Les Deux Magots de la Chine (Two Figurines from China). In 1873 the shop moved to the Place Saint-Germain and was turned into a café 11 years later, keeping its name. In addition to its literary patrons, Les Deux Magots is mentioned in Vladimir Nabokov’s incendiary 1955 novel Lolita. Today it serves as a prime people watching spot. 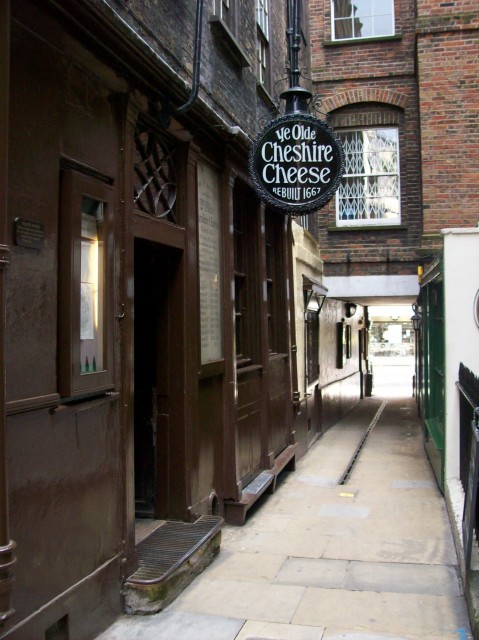 This Fleet Street pub in the City of London was rebuilt shortly after the Great Fire in 1666 with an inn having stood on the grounds since 1538. The vaulted cellars are thought to belong to a 13th-century Carmelite monastery that once occupied the site. Ye Olde Cheshire Cheese enjoys a rich literary history, with the likes of Mark Twain, Alfred Tennyson, Sir Arthur Conan Doyle and Dr. Johnson all having nursed a pint or three within its walls.

Though its most famous patron is Charles Dickens, who was a regular and makes reference to the Cheshire Cheese in his 1859 novel set in London and Paris – A Tale of Two Cities – where characters Charles Darnay and Sydney Carton enjoy “a good plain dinner and good wine.” In addition, the Rhymers’ Club, a group of London-based poets founded by W.B. Yeats in 1890, held meetings at the haunt, along with the Domino Room at the Café Royal.

This colourful bar on Columbus Avenue in San Francisco’s North Beach was a favourite drinking den of Beat writer Jack Kerouac and his buddies Neal Cassady – who served as the inspiration for Kerouac’s antihero Dean Moriarty in his era defining 1957 novel On the Road – and Beat poet Allen Ginsburg, along with gadabout Dylan Thomas.

Designed by Italian architect Italo Zanolini, the bar, which is open every day of the year, was founded in 1948 by Henri Lenoir a stone’s throw from the famous City Lights bookstore. Located just off Jack Kerouac Alley, named in honour of the author in 1988, Kerouac was a Vesuvio regular and was said to have once missed an important meeting with American writer Henry Miller after getting drunk at the bar. It remains a popular hangout for San Francisco’s hippy contingent and bohemian bookworms. 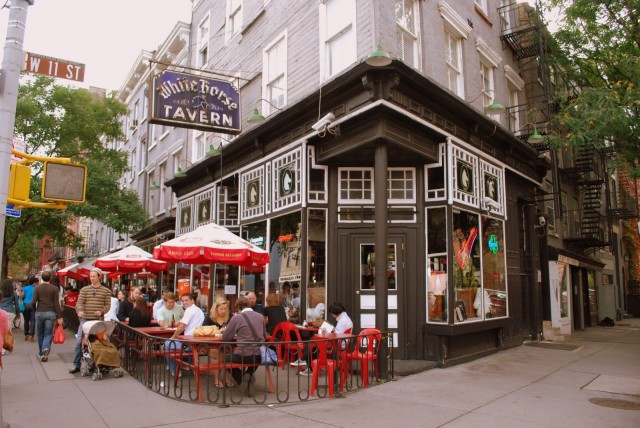 Built in 1880, the White Horse Tavern is most famous for being the site of Welsh poet Dylan Thomas’ last drink on the night of 3 November 1953. Visiting the city on a poetry reading tour and already in ill health, having spent most of the day in bed, Thomas went to the White Horse at 2am for a prolific drinking session.

Returning to the Chelsea Hotel on West 23rd Street where he was staying, he declared: “I’ve had 18 shots of whisky. I think that’s a record!” Admitted to St. Vincent’s hospital in Greenwich Village the morning of 5 November, Thomas died of pneumonia four days later.

Despite its grisly associations, the West Village tavern remains a favorite haunt for literary types, attracting poets and writers to this day. In honour of its famous patron, portraits of Thomas adorn the walls and a plaque commemorating his fateful last visit hangs above the bar. 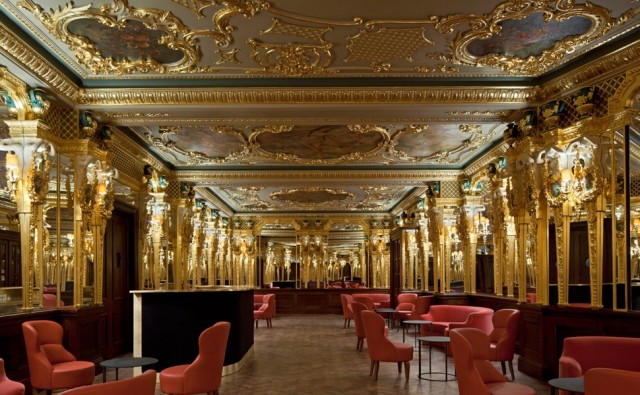 A man of exquisite taste who could resist everything except temptation, it comes as no surprise that Irish-born writer and poet Oscar Wilde frequented the opulent Café Royal in Piccadilly. Legend has it that Wilde first fell in love with his lifelong muse, Lord Alfred Douglas, affectionately known as Bosie, over a glass of absinthe at the bar. Having recently undergone an expensive refurbishment, the ornate, golden Grill Room has been renamed the Oscar Wilde Bar in the writer’s honour.

Its original incarnation was founded in 1865 and boasted Louis XVI detailing. One of the first places to serve gourmet French cuisine, the Café Royal earned a reputation for boasting one of the greatest wine cellars in London. Enjoying a rich literary past, Sir Arthur Conan Doyle, H.G. Wells, George Bernard Shaw, Rudyard Kipling, W.B. Yeats, D.H. Lawrence, Graham Greene and Virginia Woolf all regularly dined there, along with painters Walter Sickert and James McNeill Whistler. 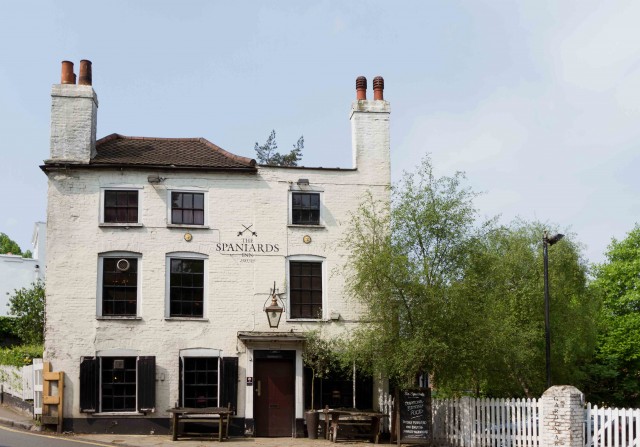 Built in 1585 as a tollgate inn, this north London pub has a colourful history. Legend has it that highwayman Dick Turpin was born at the inn and later used it as a base for his nefarious operations. Turpin’s pistols hung above the bar until recently, before being stolen. The pub takes its name from two former landlords, Spanish brothers Francisco and Juan Porero, who fought a duel over a woman in which Juan was killed.

Buried near the inn, his ghost is said to haunt the pub, along with that of Turpin, who has been seen on the road outside and heard in the upstairs rooms.

Mentioned in both Charles Dickens’ The Pickwick Papers and Bram Stoker’s Dracula, the Romantic poet John Keats was a regular at the Hampstead haunt and reportedly wrote his famous Ode to a Nightingale in the pub’s large garden one summer afternoon. Fellow scribes Robert Louis Stevenson, Mary Shelley and Lord Byron were also patrons. 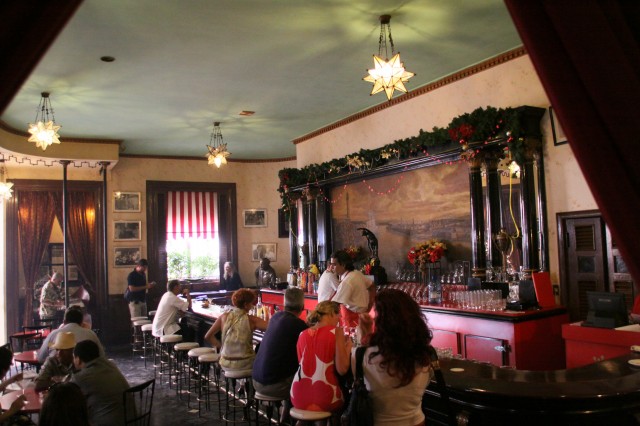 Having frequented a plethora of bars around the globe in his day, from the aforementioned Les Deux Magots in Paris to La Bodeguita del Medio in Cuba, it’s hard to pin Ernest Hemingway down to one drinking den, though he is perhaps most famously associated with El Floridita in Havana, known as the “cradle” of the daiquiri. Opening in 1817 under the name La Piña de Plata (The Silver Pineapple), the cocktail was said to have been created at El Floridita in the 1930s by bartender Constantino Ribalaigua Vert.

So fervent was Hemingway’s passion for Floridita, a life-sized bronze statue of him sculpted by Cuban artist José Villa Soberón was erected by the bar in 2003 and stands there to this day alongside a snap of Papa with communist revolutionary Fidel Castro. Fellow writers Ezra Pound and Graham Greene, author of Our Man in Havana, also swung by the bar for a daiquiri when they visited Cuba. 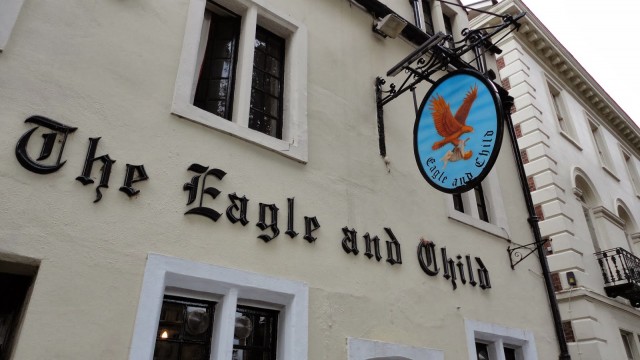 This quaint pub in St Giles is owned by St. John’s College, Oxford. It carved out a literary reputation after becoming the meeting place for the Inklings literary group during the ‘30s and ‘40s, who praised the value of narrative in fiction and encouraged the writing of fantasy.

Counting C.S. Lewis and J.R.R. Tolkein as members, the Inklings would convene at the Eagle and Child on Tuesdays at midday to discuss their unfinished works and read from them in a private lounge called the Rabbit Room, with Tolkein’s The Lord of the Rings and a proof of Lewis’ The Lion, the Witch and the Wardrobe read to the group there.

Affectionately dubbed The Bird and Baby by its literary patrons, who often shortened it to simply The Bird, after the Rabbit Room was opened to the public, subsequent Inklings meetings were held at The Lamb and Flag across the street. The Eagle and Child was said to have served as the lodgings of the Chancellor of the Exchequer during the English Civil War in the mid-17th century, with pony auctions held in the rear courtyard.