Simpson’s Duff beer goes down under

The Simpson’s iconic  brew, Duff, is set to launch in Australia, the first brand to be officially endorsed by the show’s creators. 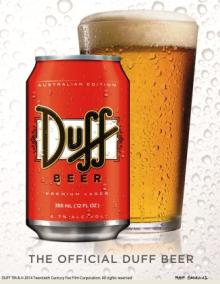 The brew, enjoyed by Homer Simpson in the fictional town of Springfield, will make its debut down under on May 28 in Sydney, with a pop-up Moe’s Tavern planned at the Woolloomooloo Bay Motel between May 23rd and 30th which will also sell the show’s signature Krusty Burgers, according to a report by Australia’s theshout.com.au.

It is the first official Duff beer to be created with the blessing of the show’s creator, Matt Groening, and 20th Century Fox, after the rights were obtained by Australia’s ALH group, part-owned by Woolworths, and comes ahead of the cartoon’s 25th anniversary in Australia.

Ian Kingham, merchandise manager of ALH, told The Shout: “Twice its come to Australia and twice its been recalled,” adding that while the beer has “good novelty value”, the beer is a “perfectly good lager”.

Australia’s Duff Beer is brewed in the US by the Pinnacle Liquor Group, Woolworths Liquor’s exclusive brands division.

It will be available in 355ml cans at Australia’s Beer, Wine and Spirits outlets (BWS) and Dan Murphy’s nationwide and will retail for A$17.00 per six-pack and A$45.00 per case.

A Duff beer went on sale in the UK in 2012 after the resolution of a trademark tussle.