Valpolicella producer Masi is championing the rare Oseleta grape variety as a valuable blending component of the region’s wines, including Amarone.

The grape features in a mid-tier range from Masi, which the producer has introduced as an on-trade focused offering, designed to build on its existing presence through an entry level range of wines within the off-trade sector.

Oseleta was picked from an experimental vineyard of 48 different varieties or clones that was planted by Masi during the 1980s. The company then carried out micro-vinification trials, from which Oseleta emerged as a variety that, as export manager Pier Giuseppe Torresani explained, was “very unique and interesting for our area.”

Describing Oseleta’s “more tannic structure, minerality and dark berry notes,” he remarked: “It’s very different to the light, more gentle, low tannin of most Valpolicella grapes,” among which the most dominant is Corvina.

As a result of its belief in the variety’s potential, Masi planted 18 hectares, making it by far the largest representative of the total 21ha the company believes is currently planted across the Valpolicella region.

The variety’s name derives from local dialect meaning a small female bird, which Torresani suggested relates to the appearance of its small bunches that ripen late in the season and are often still hanging after the vine has shed its leaves.

Since 1990 Masi has been incorporating Oseleta into various parts of its Valpolicella portfolio, including a 10% proportion in both the Costasera Riserva Amarone from the wine’s maiden 2003 vintage and also the Brolo di Campofiorin from 2009 onwards.

The Campofiorin range is produced using a twist on the traditional Valpolicella “ripasso” technique, which usually sees grapes undergo extended maceration on grape skins already used in the production of Amarone. However, since 1990 Masi has adopted a double fermentation technique by using dried grapes instead of spent lees.

“It’s like using a tea bag twice,” maintained Torresani of the standard ripasso approach, noting that DOC regulations permit winemakers to use these spent lees a second time again. In his view, “the wines are a bit more rustic so producers often use sugar to cover it up.”

By contrast, Torresani explained, “We use the grapes only once so they give their best aroma of dried fruit. The resulting wine is cleaner, more refined and elegant so we don’t need to charge it with sugar.” On a stylistic note for Campofiorin, he added: “It creates this new category between ripasso and Amarone.”

With such a variety of approaches to this ripasso technique, Torresani conceded the challenge for the region of presenting a cohesive image for Valpolicella’s trademark expression. “There are so many differences in the style and profile of a region that is really quite small,” he acknowledged.

Torresani also distinguished Masi’s approach to making Amarone, with an emphasis on a long, cool appassimento, or drying process, which can last for four months – double the timeframe laid down by the DOC.

In his view, the extended Masi route “gives a better evolution of aroma; it’s not just about concentration.” Indeed, Torresani stressed: “It is this evolution that gives the main difference between Valpolicella and Amarone.”

What’s more, he noted, the onset of botrytis after around 90 days “brings a higher glycerin content which is very important for Amarone – it gives a smoothness, a softness in the mouth.”

In addition to the structure and character offered by Oseleta as a blending tool in both the Costasera Riserva and Brolo di Campofiorin, since 1995 Masi has also shown off the variety on its own in the form of Osar, a play on words with the grape’s name that means “to dare”. 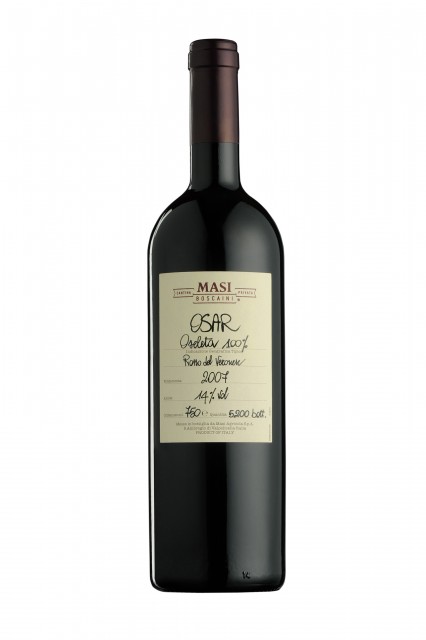 Made only in the best years and limited to around 5,200 bottles, Osar is made by maturing the wine in heavily toasted French barriques for two years in order to soften Oseleta’s naturally tannic character. The wine will then spend at least one year in bottle prior to release.

The absence of both Corvina and Rondinello, mandatory components of DOC Valpolicella wines, means that the RRP £45 Osar is labeled simply as Rosso del Veronese.

Acknowledging that it was previously “a bit of a jump” from the standard Costasera Amarone up to Masi’s very limited production and high-priced single cru expression, Hunt remarked: “To have something in between that is still Costasera but more accessibly priced has been a real boon.”

What’s more, he noted, “It’s managed to break out of traditional Italian restaurants,” with listings at London venues including Aqua at The Shard and STK giving the product “a relatively broad reach for what is a very premium wine.”