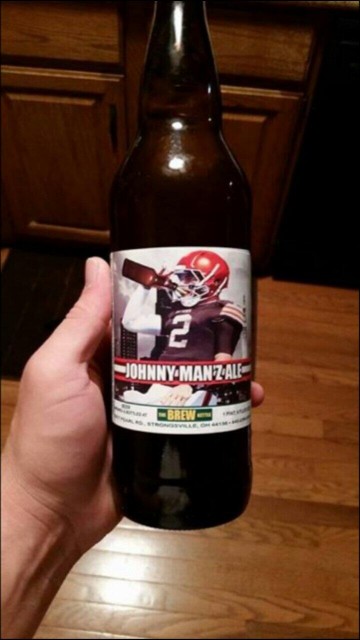 Manziel, or “Johnny Football” as he is known, was one of the most hotly-tipped college players in the recent NFL draft with commentators speculating that he may be in for a Hall-of-Fame career – if he lives up to the hype that is.

A graduate of Texas A&M University, he was picked up by the Cleveland Browns in the first round and has given fans of the venerable but permanently under-performing franchise hope that better times are in the offing.

With “Manziel mania” running high throughout Ohio, one American football and craft beer fan decided to put his new hero on the label of his latest brew.

According to the Bleacher Report, the unknown fan had brewed his “Johnny Man’z Ale” at The Brew Kettle, a brewpub/brewery in Strongsville, Oh, which allows people to brew their own beer, bottle and label it.

The beer is not available commercially although occasionally a particularly original recipe and label is picked up by the pub and sold to customers.

Even if it does get chosen and proves popular though, Browns fans may have to wait to see Manziel in action as the management has made it clear that he will have to compete for the starting spot with current QB, Brian Hoyer.

This is not the first time that the NFL and beer have combined. Ahead of the Super Bowl this February, the West Flanders Brewing Company in Colorado brewed “Omaha, Omaha, Brett!” – a reference to Broncos quarterback Peyton Manning’s favourite play call at the snap.