If you thought Hong Kong lagged behind other cities in organic wine, think again. We take a look at the best 10 spots to grab yourself a glass of natural wine that shuns the use of chemicals. By Jonathan Maloney 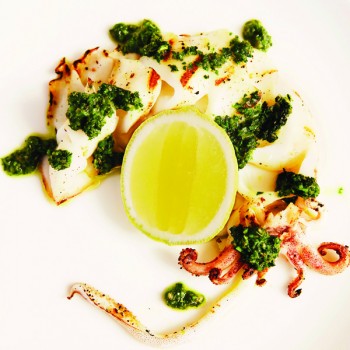 The organic wine movement is going through its renaissance right now with scores of bars and restaurants serving organically grown wines popping up across the globe. In Hong Kong, at least, the movement really only began when Karim Hadjadj founded La Cabane Group in 2010, which gave wine lovers access to a viticulture movement defined by wines grown in accordance with organic agricultural practices.

But what exactly are the differences between biodynamic and organic? Wine made from organic grapes grown without chemical fertilizers, herbicides, pesticides, added sulfites, or genetically modified seeds and crops, is termed “organic”.

The biodynamic method of farming integrates organic grapes, agricultural methods and farm animals in a “natural” ecosystem that utilises astrological and lunar cycles to produce wine that is the
sum of all of these beliefs.

The InterContinental Hong Kong hotel’s Lobby Lounge has a rather admirable wine list – in part due to two-Michelinstarred sister restaurant Spoon by Alain Ducasse. Aside from the superlative
weekend buffet, if an evening view of the city’s skyline is what you’re after, it’s hard to beat the panorama from three-storey windows framing the Lobby Lounge.

With roughly 10 organic or biodynamic wines available, we’d happily sip on a glass or two of 2011 Tenuta Ansitz Waldgries Sauvignon Blanc dell’Alto Adige from Italy, a 2010 Maverick Wines
Shiraz Twins from Barossa, South Australia, or a 2011 Les Jamelles Merlot Naturelles from the South of France while enjoying that view.

So, are such organic alternatives really better than the genetically controlled wines from the big vineyards? “It’s neither,” says La Cabane’s Dilworth, “it’s up to the individual to decide what they prefer and why. Palate is not a competition – the real proof is in the pudding, as they say!”. 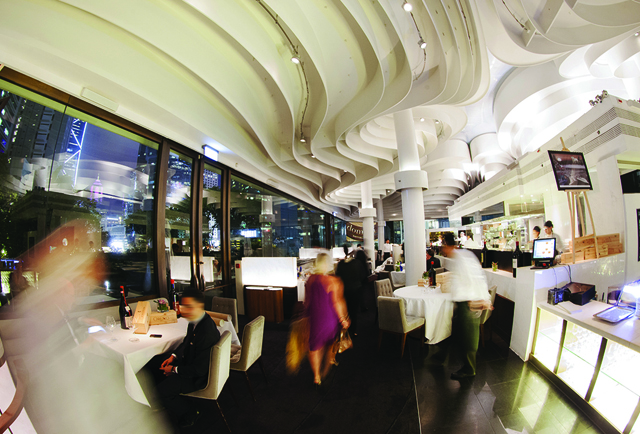 Italian fine dining restaurant Domani oozes sophistication while managing to remain warm and welcoming. An open kitchen keeps the atmosphere buzzing, while the décor is topped by a large swirling ceiling motif that displays a modern design ethos. The restaurant’s wine list features a number of boutique, provincial wineries that are high-quality and reasonably priced.

Duddell’s opened to fanfare in mid-2013 as part of an art-meets-dining concept by the people who brought dining hotspots 22 Ships, Chachawan, The Pawn and The Principal to Hong Kong. Set over two floors, Duddell’s is an exercise in contemporary design and cutting-edge Cantonese food.

But it’s not just the restaurant and art space that are attracting a chic clientele – the Salon bar upstairs features a wide range of innovative cocktails, but also more than 12 bottles of organic and biodynamic wines that can be enjoyed at the Dining Room, Salon or the lush Garden Terrace. 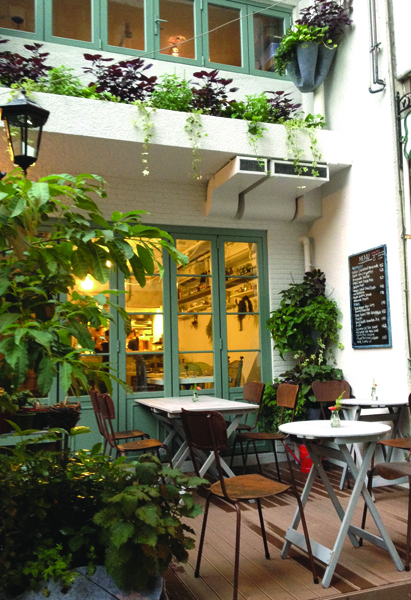 Since opening in mid-2012, Peggy Chan has crafted a niche for herself with Grassroots Pantry, a boutique café specialising in serving nutritious, homemade vegetarian food and drinks. The Cordon Bleu-trained, former Four Seasons Hong Kong and Peninsula Tokyo chef has selected a range of organic wines that are free from added sulfites and chemical fertilisers, with wines such as Josmeyer Fleur de Lotus 2009 and the COS Frappato 2011 IGT. Grassroots Pantry stocks more than 15 types of organic wines. 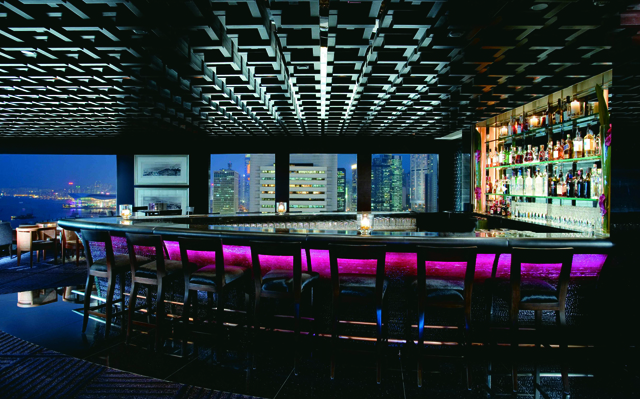 One of Hong Kong’s most iconic hotels, the Mandarin Oriental may surprise some by appearing on this list, but the hotel stocks more than 25 organic or biodynamic wines. Standout bottles include Pierre Peters 2004 Les Chetillons Champagne, the 2010 Pouilly Fumé, Pur Sang, Didier Dagueneau from Loire Valley and a rather delectable 2007 Grüner Veltliner Alte Reben from Weingut Bründlmayer in Austria.

While the range of organic and biodynamic wines are available at all of the hotel’s bars and restaurants, it’s hard not to have an affinity for popping into the Captain’s Bar on the ground floor – filled with business types – or M Bar, located on the 25th floor with stunning views of the Hong Kong skyline. 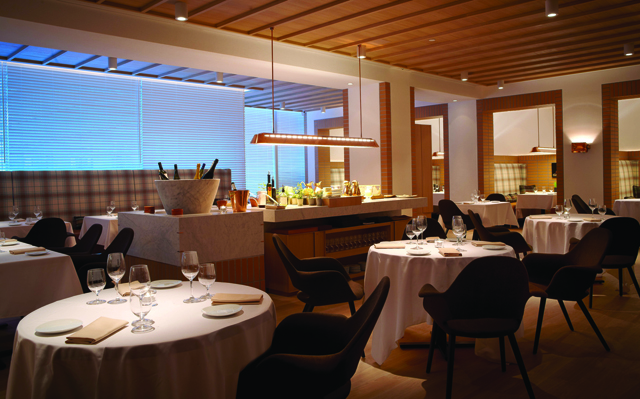 While most may be taken by the Press Room Group’s nod to cultural heritage in its design of The Pawn, a modern take on the British gastropub, others look beyond the facade and see it for what it really is: excellent contemporary British food paired with delicious cocktails and a wine list that includes more than 30 organic and 40 biodynamic wines from around the world.

With a rotating wine list shared with fine dining sister restaurant The Principal that makes it hard to pin down select wines at any given time, The Pawn regularly features a wide selection of
biodynamic and organic wines from Oregon to Otago in New Zealand. 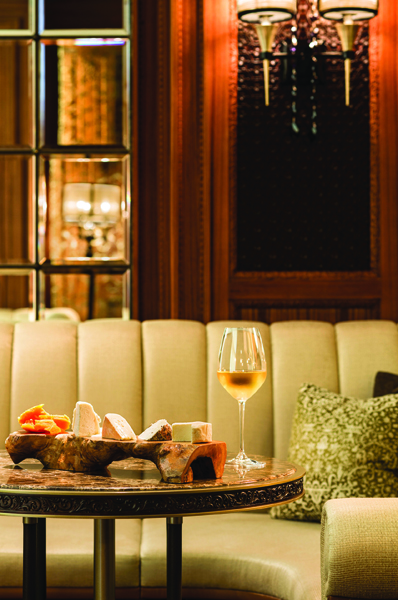 Since 2006, Caprice has regularly been at the forefront of the city’s fine dining scene, with former chef Vincent Thierry winning two Michelin stars in the inaugural 2009 Hong Kong & Macau
Michelin Guide before holding three-star status for four years from 2010-2013.

Caprice undoubtedly also has one of the most superlative wine and cheese lists in Hong Kong, with neighbouring Caprice Bar allowing turophiles to gorge on artisanal cheeses and some truly
phenomenal wine pairings.

With chef Fabrice Vulin taking over the helm this year, expect to see a new direction in terms of food and wine while maintaining the same outstanding level of service and refinement for which Caprice is renowned. 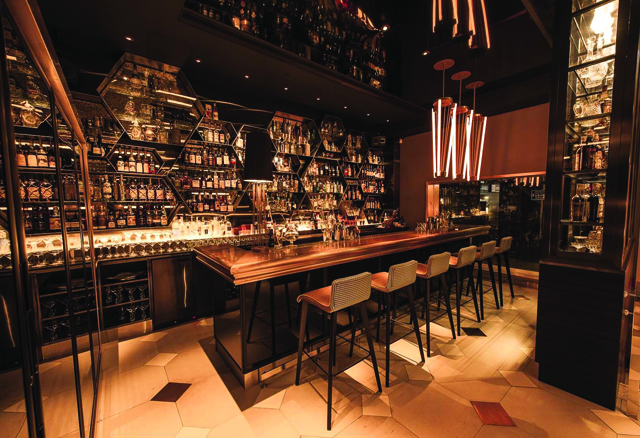 Il Milione holds the distinction of being one of two restaurants in Hong Kong to have had award-winning mixologist Giancarlo Mancino (also of the superb Mancino vermouth) design and open its
bar – the other being the three-Michelinstarred Otto e Mezzo. The restaurant serves up perfectly delicious Umbrian cuisine, but cocktail and wine connoisseurs are particularly spoilt here.

Those looking for organic or natural wines are well looked after with the restaurant featuring more than 100 organic wines. Of particular interest are the organic Umbrian wines from Di
Filippo, Vernaccia and Sagrantino – some of which have vineyards that date back to the 16th century. 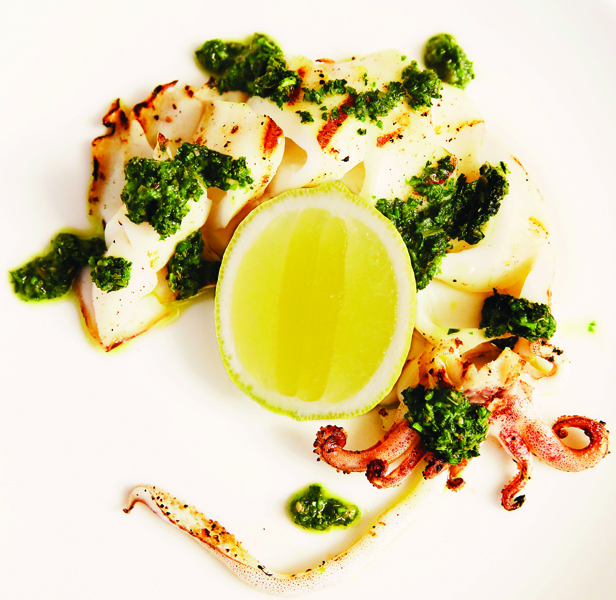 The Hong Kong offshoot of the Sydney original, 121BC is a lively, friendly place where the emphasis is on sharing plates of homestyle Italian pastas, arancini, grilled sardines and octopus with
predominantly organic and biodynamic Italian wines. The restaurant prides itself on serving a selection of wines from very small producers, with most bottles being unfiltered.

Standout wines include a rather delicious sparkling Quarticello Despina 2012, the Alice Bonaccorsi Etna Bianco 2010 – a crisp white wine grown on the northern side of Mount Etna – and a Praesidium Ratafia from Abruzzo, the native region of the Montepulciano grape. 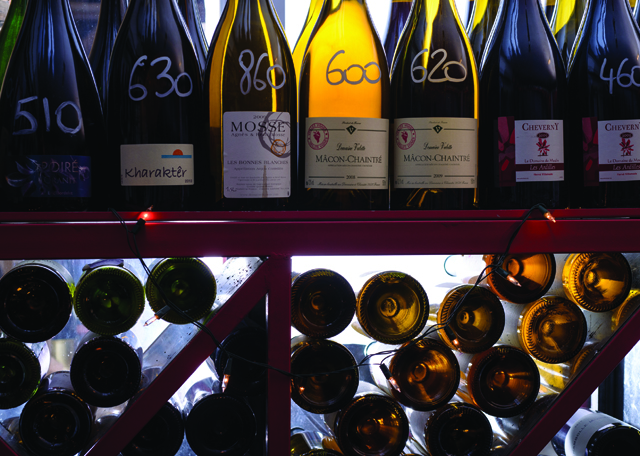 La Cabane is Hong Kong’s first and only bistro serving biodynamic and organic wines exclusively. Owners Cristobal Huneeus and Karim Hadjadj are arguably the pioneers of the city’s move towards
organic wines, and are responsible for supplying much of the wines to bars and restaurants across the city.

La Cabane’s enormous wine portfolio is a collection of vin naturel. The term itself is a fairly recent one and relates to the physical winemaking process as well as the source of the grapes. According to Latif Dilworth, manager of La Cabane a Vin, the group’s wine store tucked under Hollywood Road: “Some winemakers seek to rid their wines of chemicals and manipulation and return to making wines that best represent their terroir with as little intervention as possible.”