Vinexpo Asia-Pacific 2014 will reflect Asia’s position as the world’s biggest spirits consumer with the launch of a new bar concept at next month’s fair. 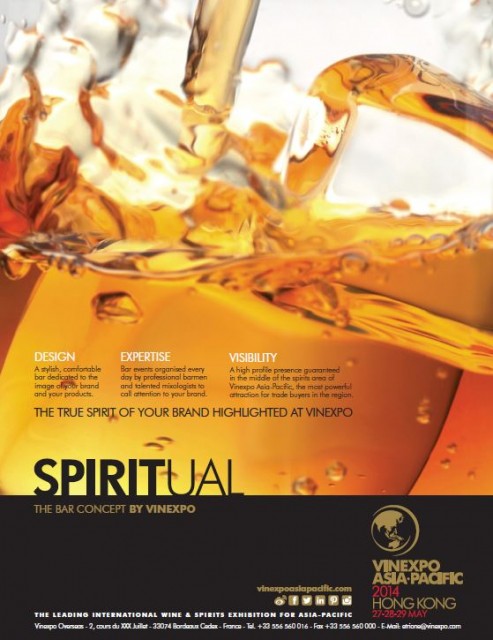 Organised in partnership with db’s sister title The Spirits Business, the “Spiritual” bar will feature spirits brands from all over the world in a move designed to give producers the chance to present their drinks in an original and higher profile way.

Located in the centre of Hall 3, Spiritual will host demonstrations by professional mixologists belonging to the International Bartenders Association, who have been tasked with creating new cocktails that will be available for visitors to taste. A series of masterclasses will also take place at the bar.

According to data compiled by Vinexpo in conjunction with the IWSR, Asia holds a 62.8% share of the total spirits volumes consumed worldwide. While China holds the title of the world’s biggest spirit consuming country, Japan also stands out as the biggest spirits importer in the Asia-Pacific region.

Despite the negative effect of Chinese government austerity measures on sales of many spirits brands, Vinexpo forecast significant growth for the Asia-Pacific region. Between 2013 and 2017, its data suggested that spirits consumption in India and Singapore would increase by 20.5%, while China’s spirits consumption will grow by 8.7%.

In recent years Vinexpo has sought to give the spirits category an increasingly prominent position at its fairs, with this year’s Hong Kong show featuring baijiu – which accounts for 38% of total spirits consumption worldwide – for the first time.

Other new spirits exhibitors include a Latvian producer of vodka, gin and liqueurs, while new representatives from Lithuania and Finland have also taken stands.