Since moving to New York in 2002 Jim Meehan has blazed a trail through the city’s cocktail scene to become one of its best known mixologists. 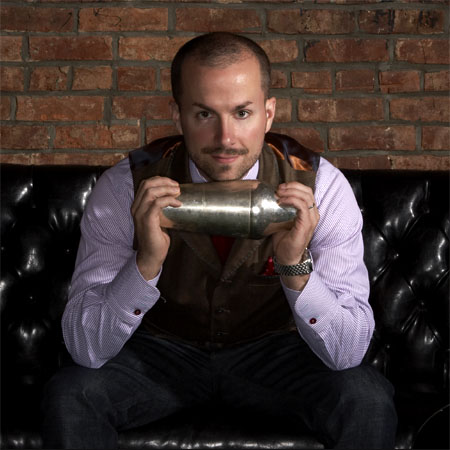 Starting out tending bar at the Pegu Club and Gramercy Tavern, Meehan began building a reputation as one of the cities up-and-coming bartenders. In 2007 he partnered with Crif Dogs founder Brian Shebairo to open PDT, a hidden cocktail lounge attached to the legendary East Village hot dog stand. He has since won numerous awards including the Cheers Magazine rising star award and the Spirited Award for American Bartender of the Year at Tales of the Cocktail.

Meehan is also deputy editor of Food & Wine Magazine’s annual cocktail book and a contributing editor of Sommelier Journal. He now works as a senior advisor to Banks 5 Island Rum – a brand founded in 2008 inspired by the 18th century botanist and explorer Sir Joseph Banks. Banks 5 Island Rum is a blend of more than 20 rums from 5 countries including Trinidad, Jamaica, Barbados, Guyana and Indonesia.

db: Where did your love of rum begin and what has been your most memorable rum-based experience?

Jim Meehan: I love all spirits! With that said, my most memorable rum based experience was accompanying Banks Rum chairman Arnaud de Trabuc to Amsterdam to assist him in the selection of rums for our amber rum Golden Age, and first limited edition rum, Endeavor. Being part of the creation of our three products from the ground up has been an eye-opening, deeply-rewarding experience I’ve learned a lot from.

db: What do you feel makes Banks Rum stand out in its category?

JM: We helped reinvigorate the blended rum category, which had all but disappeared decades after the British Royal Navy abolished the daily dram. After the success of our Five Island blend, other producers followed our lead, and now there are more blended rums to choose from. I might add that at the time we launched, there weren’t many flavorful white rums on the market. Since then, many producers seem to be more focused on making distinctive white rums, than competing for vodka’s market share with neutral cane based spirits.

db: How would you recommend drinking rum?

JM: I always taste a spirit neat before mixing it to get a sense of its quality and character. For white rums, the Daiquiri is the ultimate “tell” cocktail to determine it’s worth. For aged and amber rum, I like to mix an Old Fashioned cocktail. I think Banks 5 and Golden Age are excellent in each. Recipes below:

Old Fashioned
2 oz. Banks 7 Golden Age Rum
2 Dashes of Angostura Bitters
1 Sugar Cube
Muddle the sugar cube and the bitters, then add the rum and ice to a mixing glass
Stir and strain into a chilled old fashioned glass filled with one block of ice
Garnish with an orange twist

db: Which other spirit brands do you favour and why?

JM: Besides blue chips like Tanqueray, Suntory and Highland Park, which should never be taken for granted, It’s hard to pick favorite brands because many of them are run by large companies, who periodically restructure the teams and agencies that direct them. Smaller labels, like Compass Box and Del Maguey, tend to be the ones I follow, because they remain under the close watch of people (such as owners John Glaser and Ron Cooper) whom I respect and admire. The liquid is very important, but we’re in the people business after all.

db: 2014 saw predictions that two brands favoured by millennial consumers – Kraken and Sailor Jerry – would “spearhead rum’s Western mainstream aspirations”. How do you feel Banks fits with this industry trend?

JM: I’m impressed by the marketing and packaging of these two brands, but the liquid misses the mark for me personally. I think we share similar aspirations (commercial success) with these brands, but have taken a different approach with a longer road to mainstream recognition. With continued support from the trade, we’re hoping to make our mark with consumers who approach spirits like fine wine.

db: What has been your greatest extravagance in life?

JM: I’ve always kept my eggs in many baskets: writing, running bars, brand development, and events are a few of the ways I earn a living. I love what I do, so none of it really feels like work. Finding balance can be tough at times, but doing what I love is life’s greatest extravagance.

db: Do you feel the growing trend for premiumisation will help to stabilise the rum category after a difficult 2012?

JM: Rum remains a commodity driven category driven by big brands, whose production (and profit margins) in many regions is government subsidized. The big brands are doing just fine. I think premiumisation helps, but most of the new offerings are entering at a super premium price point, instead of that $20-$30 sweet spot, that most of the top brands in other categories sell at. As long as you can still get a “good” bottle of rum for $15 a bottle, most people aren’t going to spend $20-$25, which is where smaller brands must enter the market to remain competitive.

db: Who would be your ideal dinner party guests and what food and drink would you serve them?

JM: This may sound cheesy, but I’m grateful for the hand life deals me every day. I feel like it’s important to live in the “here and now”: I would never want the people I’m spending time with to think that I’d rather be anywhere other than with them. One of the best parts about what I do is getting the opportunity to meet so many people in bars and at the dinner table. With this said, I’m always grateful for the opportunity to eat in someone’s home: there’s nothing more intimate.

db: By what phrase do you try and live your life?

JM: Treat others how you’d like to be treated.

db: What does the future hold for the rum category and for Banks?

JM: Small brands don’t have the luxury of a crystal ball. What we do have is the ability to make bold decisions as outliers, which have the potential to positively affect the rest of the category. I’m hoping Banks continues to innovate, and with some luck and good timing, we’ll begin to captivate consumers looking for more than a good time from their rum brand.