A vodka packaged in a gun-shaped bottle alongside a glass grenade has been found in breach of UK alcohol marketing laws for its “inappropriate” association to violence and aggression. 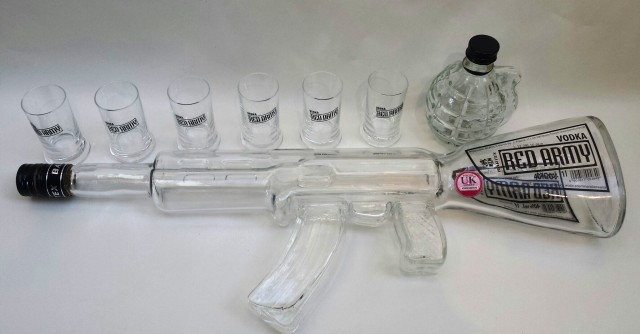 Bartex’s Red Army Vodka gift pack features a gun-shaped bottle of vodka and a glass grenade filled with a Russian herbal liqueur and six shot glasses typically retailing at around £100.

The novelty gift pack sparked a complaint to The Portman Group from The Independent Complaints Panel of the Responsible Retailing Code of Northern Ireland who said its packaging was closely linked with “violent, aggressive, dangerous or anti-social behaviour”.

In response, Bartex said the product was simply a glass bottle shaped as a gun and therefore had no association with weapons or violent behaviour, and later reiterated it was not their intention to “create or promote violence”, stating the company produced alcohol, not weapons.

However the Portman Group’s Independent Complaints Panel (ICP) concluded that the name Red Army, together with its packaging, were “entirely inappropriate for an alcoholic drink” as it suggested a direct association with violent and dangerous behaviour.

Henry Ashworth, chief executive of the Portman Group, said: “Strict UK alcohol marketing rules specifically prohibit an alcoholic drink from being sold if it has any association with bravado, or with violent, aggressive, dangerous or anti-social behaviour.

“On this occasion, the Panel ruled that the product name in the context of the packaging, together with the packaging itself, was too strongly linked to these themes. We therefore appeal to retailers not to stock the product its current packaging after 20 June.”

Red Vodka were found to have breached the code’s 3.2(b) rule which  states that “a drink, its packaging and any promotional material or activity should not in any direct or indirect way suggest any association with bravado, or with violent, aggressive, dangerous or anti-social behaviour.”

UK retailers have been instructed not to place orders for stocks of Red Army Vodka in its current packaging after 20 June, 2014.