A Welsh distillery has released a seaweed gin infused with algae gathered from the Cornish coast. 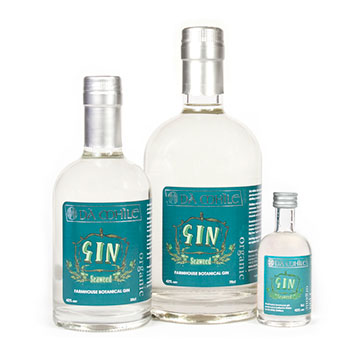 The 42% abv small batch Dà Mhìle Seaweed Gin, made at the Dà Mhìle Distillery in Ceredigion in Wales, is infused with seaweed for three weeks giving its a “yellowy green” hue.

According to its website, its seaweed gin is made using  “select herbs and spices known for their complementary flavours to sea food”.

The spirit is then infused with seaweed for three weeks, “giving the gin a light green/yellowy sheen” and is the “ideal accompaniment to mussels and oysters.”

It adds: “Evolutionists claim that seaweed is the source of all life. If that is correct it makes Dà Mhìle seaweed gin the true ‘water of life’.”

Its maker John Savage-Onstwedder, founder of Dà Mhìle distillery, who also makes a Caws Teifi Seaweed cheese told walesonline.co.uk: “As with Caws Teifi cheese the pursuit of excellence is written into our DNA and every product we make at Dà Mhìle Distillery has to be of the highest quality and unique.

“One cannot survive in rural Wales by producing mediocrity.

“We must outwit and outsmart any potential competition, but at an honest price.

“Small-batch distilling is an art, but it is also about skill and craftsmanship. This new seaweed gin is a natural addition to the small batch botanical gin we launched last year which has been enthusiastically embraced by ginologists up and down the country.”

The seaweed used to infuse the gin is gathered from the beaches of Newquay in Cornwall and processed in small batches distilled alongside herbs and spices for about three weeks, and watered down to drinking strength with spring water.

According to its maker its colour and flavour will vary depending on the season and its seaweed making each batch unique.

Savage-Onstwedder, an organic farmer in 1992, first commissioned the Springbank distillery on the Mull of Kintyre in Scotland to distil organic single malt scotch whisky, which is now made in West Wales.

His eldest son, John-James, has a PhD in distilling in Germany and is believed to be the youngest distillery manager in Britain.

Its seaweed gin has been launched at various farmer’s markets this month and will be available from the distillery’s website.