A classroom made from more than 1,000 beer bottles, old tyres and plastic sheeting is being constructed by architecture students at a school in India. 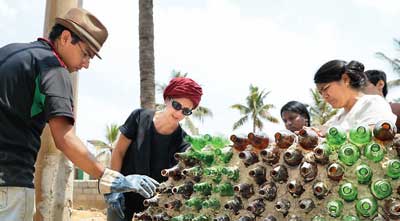 Fourteen students from Bangalore and Spain are constructing the classroom for children at a school in Thanisandra in Bangalore, according to a report in India’s Pune Mirror.

Thousands of bottles are being used by architecture students from the University Visvesvaraya College of Engineering (UVCE) in Bangalore, and peers from Spain, to build what will be the school’s only classroom made with recycled materials including bamboo, plastic sheet, bricks from demolished buildings, and old tyres and beer bottles.

Until recently, the school was holding classes in a dilapidated building which was demolished to make way for the single 5x5m classroom made using around 1,300 beer bottles. 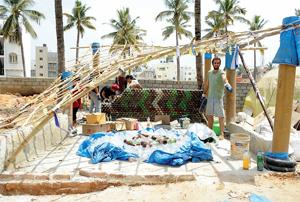 According to the architecture students, when beer bottles are mixed with cement not only do they make for a strong wall but also help diffuse light.

Ruben Jacob, a final-year architecture student at UVCE, said: “During construction, we are alternating brown, white and green beer bottles so that the light forms a nice pattern inside the classroom. There will be no need for artificial lighting in the classroom during daytime.”

The students were trained by Spanish architectural firm Proyecto Asilo on how to go about constructing the classroom with recycled materials.

The pillars will be made using discarded cardboard filled with sand while the roof will be fashioned from bamboo and blue plastic sheeting found on the road.

“We are not constructing for the heck of it. We have calculated the structural weight and point load. Trust me, even if two people sit on the roof, it can handle their weight,” said Javi S, a master’s student of architecture from Spain, who is overseeing the project.

The few bricks needed for support were picked up from a dump yard while the tyres needed to lay the foundation were procured from a tyre shop.

“The whole idea of the project is to follow the four-R philosophy — reduce, reuse, recycle and rehabilitate. We began constructing the school on last Monday and hope to complete it in a week,” said Reuben.