As Ornellaia unveiled the artistic collaboration for its latest 2011 vintage release, the Super Tuscan brand claimed that in recent years its wines have proved a “more solid” investment than gold or oil.

The study, which was commissioned by Ornellaia and compiled in tandem with Liv-ex trading platform and Sotheby’s auction house, noted that average quotes for the brand have doubled in value between 2007 and today.

With the report noting that Italy’s value share of the fine wine market has grown from 1% in 2007 to over 6% by December 2013, Liv-ex picked out Ornellaia as “one of the world’s top-flight wines, whose investment returns exhibit the most consistent growth over time.”

Although France retains its dominance of the fine wine marketplace, Ornellaia claimed “a level of performance whose percentage exceeds the average of the top ten French wines.”

The report also highlighted the Bolgheri brand’s relative stability compared to other investments. With a price fluctuation of 0.11 (based on the annual divergence from average winning bid prices at auction) noted as being “among the lowest in the world,” the study observed that in recent years Ornellaia ”has proved itself more solid than all the main asset havens such as gold and commodities like oil, as well as the leading indexes, such as S&P 500 and FTSE 100.”

At auction, where Italian wines rank third in terms of lots, behind Bordeaux and Burgundy, the brand has also been making headlines. “The sale of Ornellaia at Sotheby’s New York in 2013 was 100% sold and represented the most important sale of Italian wine sourced directly from a single estate”, according to Stephen Mould, head of Sotheby’s European wine department. “Ornellaia topped our Wine ranking as the leading Italian wine estate sold at Sotheby’s in 2013.”

Among the top performing Ornellaia wines at auction in recent years has been a Salmanazar of Ornellaia 2010, carrying a label created by artist Michelangelo Pistoletto, which sold at Sotheby’s last May for £80,000, a record for an Italian red. 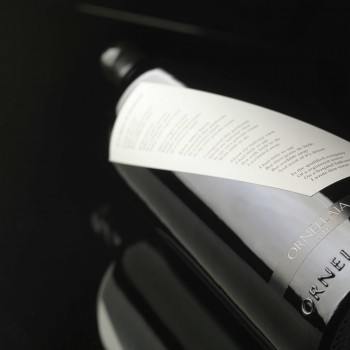 This week saw Ornellaia unveil the sixth collaboration in its Vendimmia d’Artista series. Canadian artist Rodney Graham was tasked with responding to the chosen theme of “L’Infinito”, or “Infinity”, and came up with a collection of poems, which are displayed on the bottles.

Explaining his approach, Graham said: “Some of the poems I wrote are about wine, some are written under the influence of it. A few rhyme and all are written in a humorous vein.”

When it came to displaying these poems onto the bottles, he commented: “I explored various typographic and layout possibilities in the texts and these led to the individual geometric shapes that form the eleven different labels.”

The finished labels will appear on 111 large format bottles of Ornellaia, including 100 double magnums, 10 imperials and one nine-litre Salmanazar. Each of the imperials and the Salmanazar carry a different poem and label design, while every bottle sold will be accompanied by a full collection of Graham’s poems for the project.

Eight of these bottles will be auctioned for charity by Sotheby’s in Toronto on 12 June this year. Since the first Vendemmia d’Artista wines were auctioned in 2009, Ornellaia has donated a total of one million euros to various artistic causes, including the Royal Opera House in London and the Whitney Museum in New York.

Introducing this latest release, Axel Heinz, winemaker & director of production at Ornellaia said: “With the 2011 vintage, Ornellaia returns to a typically Mediterranean expression of Bolgheri’s terroir.”

Characterising 2011 as “a particularly sunny and dry vintage, but without any excess”, Heinz said: Ornellaia 2011 has allowed us to reach a perfect level of ripeness, offering a dense wine with great aromatic intensity, but at the same time elegant, complex, and perfectly balanced.”