For the first time in its 12-year history women have been invited to take part in the Napa Valley Grapegrowers’ pruning competition. 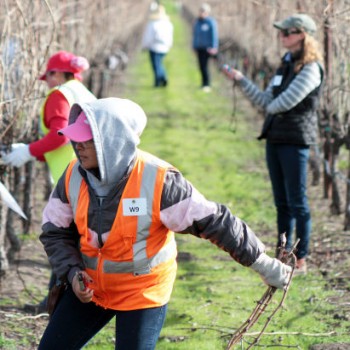 Since its inception more than a decade ago women have been banned from taking part in the competition which ordinarily sees men slash at overgrown vines to prove their skill.

However this year, in what was the competition’s 13th year, women were invited to take part for the first time, according to a report by pennlive.com.

Jennifer Putnam, executive director of the group, told the paper: “There’s been this perennial conversation about, ‘Do we include women in the competition?’ And the answer’s always been, ‘Not yet. This year we looked around the room and just thought, ‘Yes, it’s time.’ ”

Not only was it the first time that women had been included in the competition, but the winner of the competition was also a woman, Celia Perez of V. Sattui Winery, who went home with first place.

The decision to open up the contest to women marks a change in what used to be the nearly exclusively man’s world of vineyard work representing the increasing number of women now working in vineyards.

“The cultural shift has now taken place where we felt like the women would be comfortable enough coming to the competition,” said Putnam.

Pruning is an important part of vine husbandry helping to determine the next harvest with different techniques used for different grapes and climates with skill in pruning as important as speed.

Those taking part in the competition, which kicked off on 20 February at Beringer Vineyard’s Gamble Ranch, are judged on technique and ranked by time with finalists then battling it out for first place.

Among the 56 competitors was Jesus Juarez who works at Moulds Family Vineyard.

He was placed first in the 2008 pruning contest and finished in fourth place this year.

Both Jesus and his brother, Roberto Juarez, said they were happy to have women take part in the competition.

He said: “It’s good for the women because they get that opportunity.”

Also competing was Maria Fuentes, who has worked for Beckstoffer Vineyards since 1977.

Overall, women scored a little higher on technique and quality, while men had the edge on speed, Putnam said.