Lessons on food and cocktail pairing

For as long as I can remember, there has always been something special about pairing food with drink.

I decided to take this opportunity to look at the versatility of cocktails when pairing with food, following a series of evening spent with some experts on the art. Often cocktails are served as an after dinner cocktail, sitting perfectly with desert in the same way as a sweet wine. If I was at Hawksmoor for a steak or burger, I would finish my meal with an impeccably made Bloody Mary (my favourite in fact). At Beard to Tail, the Bloody Mary is made with pork jus and served with pork crackling on the side; which unfortunately is no longer available. Or in other cases you can dress up your food, with a specific spirit such as smoked salmon cured in London Dry at Gillray’s County Hall.

In late 2012 I spent a jolly afternoon at one of Diageo’s World Class Forums which included a talk from Dan Dove, Ron Zacapa’s UK Brand Ambassador, and from World Class 2012’s UK champion, Andy Mil. Andy talked us through his experience at the final in Rio and more specifically his obvious are of strength – food pairing. We sipped two different cocktails made by Andy, while he talked about why he had chosen particular food pairings and how he had come to them. He had quite an immersive experience compared to your normal bartender. Instead of sitting around planning a whole pairing, he ventured out on to the streets of Rio and created it from what he found on market stalls.

An example of one of Andy’s pairings:- 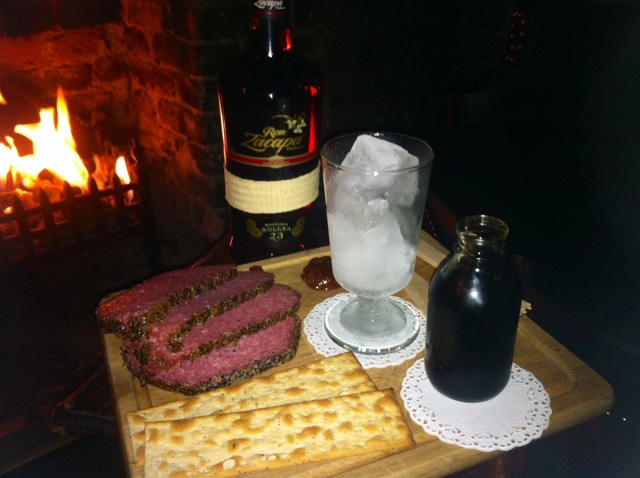 Another Ron Zacapa pairing came from James Drummond, bar manager of Southsider Cocktail Club. Drummond’s choice was a pairing of Zacapa23 blended with PX, Spanish bitters, homemade raisin syrup infused with fresh bay leaf then served with peppered salami and crackers with tomato chutney [see image right]. While I found the drink on its own a bit too tart and sweet, paired with the peppered salami it balanced perfectly to evoke a opulent, smoky herb nose and a surprisingly floral palate. The tart, sweet and acidic palate of the strawberry and balsamic rounded its off with the terrine to blend it all together.

I spent another the evening at China Tang, Dorchester with Bar Manager Luca Cordiglieri where he took several cocktails and paired them with a different dim sum course. The results varied as Luca recommend that I try drink first, then food and visa-versa. This gave me the opportunity to see how the two interacted and if there were any differences in flavour or interaction. Some were similar for the most part, while others stimulated me in different ways, like peaking heat and spice or in some cases playing down hot spicy notes. I always felt that this kind of paring was about opening up your senses and experiencing fuller, more intense flavour.

On pairing foods with cocktails Luca said: “We really enjoy working with pairing cocktails with food. I believe pairing adds another dimension to, and enhances the drinking experience and it’s becoming more and more popular”

When coming up with my own cocktail and food pairing menu, my process was to engineer the drink in concert with the food, not as an optional extra. My idea was to create a menu with an appetiser, starter, main and dessert in reference of sorts to a three-martini lunch. I took the individual flavour profiles of the main spirits in the cocktails and researched pre-existing connections with food to create the pairing. The lack of garnish is intentional – the food is the garnish.

‘The Italian’ with a Sundried Tomato and Rocket Salad with Pesto
50ml Vestal Rye (100%) infused with rocket and white truffle
15ml Tomato Juice
2 muddled yellow cherry tomatoes
2 Basil Leaves, Muddled
Shaken, served in a Martini glass
(if the truffle is a bit too expensive – use a drop of Black Truffle bitters from Master of Malt)