A lot of things keep Russell Norman awake at night. The reopening of Polpetto and the launch of a fourth Polpo site in Notting Hill are the latest causes of his insomnia. 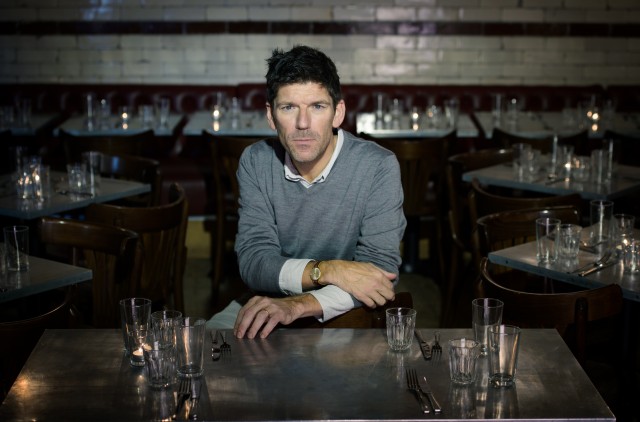 Despite displaying a confident demeanour, Norman is a worrier. “I worry a lot about my restaurants. I’ll often be wide awake at 3am unable to get back to sleep,” he says, blaming his lack of sleep on an inability to switch off. His business partner and best friend, Richard Beatty, suffers from the same affliction. Norman is an engaging presence. His masculine features appear much softer in real life than in photos, his searching blue eyes seemingly seeking approval.

He has a charming, childlike enthusiasm and an infectious appetite for life. The 47-year-old father-of-two has come a long way since his Saturday job waiting tables at Joe Allen in Covent Garden. In just more than four years he has built a seven-strong central London restaurant empire taking in three Polpo sites, the soon-to-reopen Polpetto, New York diner Spuntino, Jewish deli Mishkin’s and the latest jewel in his crown: The Ape & Bird, a gastropub in the heart of Theatreland.

He and Beatty are self-funded, which brings both complete freedom and nail-biting risk. “With each new site, we’re cranking up the risk so it’s becoming increasingly terrifying. Don’t get me wrong, risk is good and I try to never take anything for granted. A certain degree of worrying is healthy as it means you stay alert and pick up on mistakes – it’s dangerous to let complacency set in,” he notes.

Impatient and inquisitive, Norman was never going to be a one-restaurant man. “It would have been so much less stressful if we just stuck to our original Polpo site, but I would have driven myself crazy with boredom. “I’ve got the attention span of a gnat and get a great deal of excitement from opening new places,” he fizzes, adding, “I live my life constantly on the brink of not quite coping, but I like to push myself as I get bored easily.”

So much so, that he’s taken to checking the running times of plays and refuses to watch anything longer than an hour and a half. 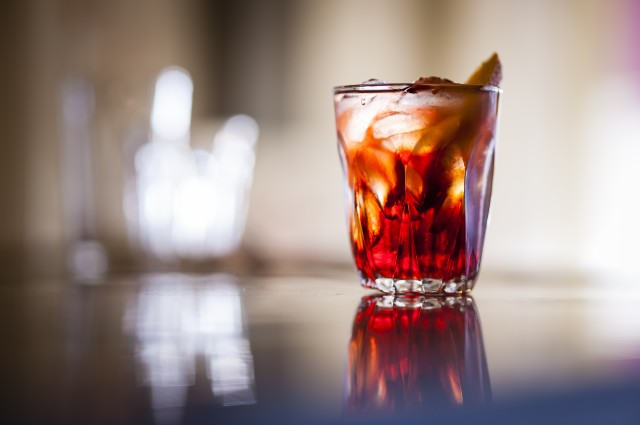 Opening his first Polpo in Soho in 2009, Norman was one of the first to pioneer the concept of sharing plates but seems loath to take any credit for it. Inspired by the bàcaros of Venice that specialise in cicchetti (small plates of local produce), it’s easy to forget that pre-Polpo, apart from Sam and Eddie Hart’s Barrafina in Soho, there were few London restaurants that served sharing plates.

“I don’t think of Polpo as being a small plates pioneer but it certainly caught people’s imagination. There was something about Polpo that spoke of the times – the recession had just kicked in and we had a bit of a scruffy feel but a very convivial atmosphere, so perhaps we were a pioneer in terms of being one of the first to use the casual dining model,” Norman offers.

He’s confident that the ongoing small plates revolution in the capital is here to stay. “Small plates have been around for millennia – look at Greek mezze or the way the Japanese eat. They aren’t going anywhere,” he says, adding, “Sharing plates break down social barriers and give you permission to eat your neighbours’ food in a way a main course never allows for.”

A self-confessed perfectionist, Norman has an eye for detail and designs the interiors of all of his restaurants due to a personal passion for aesthetics and a need to save money. He can often be found scouring antiques fairs and eBay for unusual fixtures and fittings and recently stripped Polpo of its signature squirrel cage bulbs after too many restaurants copied the look.

“When everyone starts doing what you’re doing it loses its appeal. We’ve replaced our filament bulbs with low hanging lights covered with linen shades that you often find in Venetian bars, so we’re going back to our roots in a way. I don’t mind people copying me as it forces me to reinvent. The only annoying thing about it is that people forget who did it first,” he admits. Norman is unafraid of change and last year quietly went about rebranding his Covent Garden site, da Polpo, to bring it in line with his two other Polpos. 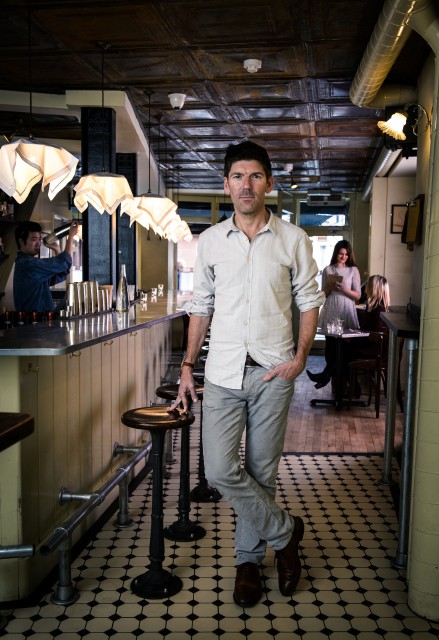 “It was a fascinating exercise. All we did was change the name to Polpo and streamline the menu and almost overnight the number of people through the door increased dramatically,” he reveals. Norman’s latest toy is The Ape & Bird, a 150-seater gastropub at Shaftesbury Avenue, which opened in December.

He secured the site, formerly The Marquis of Granby pub, after a fierce bidding war, and quickly went about putting his signature stamp on it with an oak bar, a theatrical red curtain at the entrance and multi-coloured fairy lights around the windows.

Proving the pub, which was very nearly called The Francis Bacon, has a sense of humour, episodes of Fawlty Towers are piped through the speakers in the loos.

“I always wanted to do a pub and it’s our first site in seven where people can come in for a drink without having to order food, which is a dream,” Norman enthuses. A rant about London’s “draconian” licencing laws follows. Headlining on the menu are pub grub classics, from pies, steaks and whole roast chicken to a pig’s trotter scotch egg, which is fast becoming a signature dish.

Also in the line-up are more daring dishes, such as devilled kidneys on toast, rabbit terrine, and black face mutton mince and dumplings. On the wine front, Norman’s own Polpo-branded Prosecco, created through a partnership with specialist Italian importer FortyFive10°, is “flying”, as is Polpo’s own-label Corvina and Garganega made by Verona producer Torre del Falasco in tandem with Liberty Wines, while Château Margaux’s third wine, Margaux du Château Margaux, tops the list at £85 a bottle.

While Norman is keen to shine a light on London’s best craft brewers, with two cask ales from the Hackney Brewery on tap and two beers from the Camden Brewery on keg, The Ape & Bird isn’t trying to carve a niche as a craft beer specialist. “I don’t want beer to be at the centre of what we do – it was always my aim to have a small and intelligent offering,” he says. 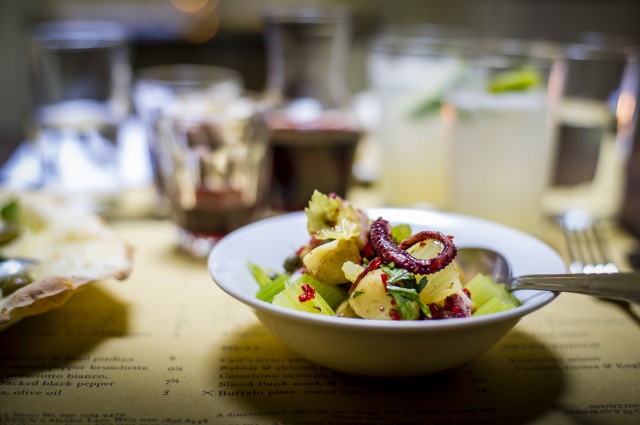 Always on the lookout for new sites, Norman receives daily calls from his property agent flagging up potential restaurant spaces. “I’m confident in saying that London is now the restaurant capital of the world. As a scene it’s hard to beat, so it’s great to be at the centre of the vortex,” Norman says. He and Beatty recently exchanged on a 5,500ft2 site in Walkers Court in Soho, which is likely to open at the end of next year, though Norman remains tight-lipped as to under what guise.

“It won’t be a Polpo or a Spuntino, it will be something completely different,” is as much as he lets on, though having expressed a desire to open a pizza restaurant, could Londoners soon be getting in on a slice of the action? 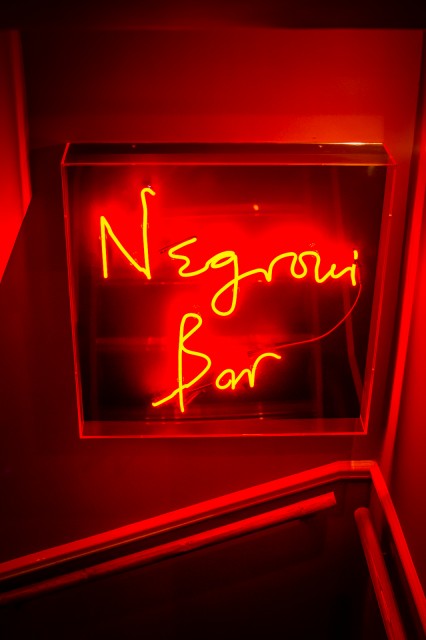 “Pizza is fast, fun and delicious, what’s not to like? Pizza Pilgrims have done great things but there’s still somewhere to go with the concept and something new to bring to the table,” he muses.

Another ambition is to open a gritty hipster restaurant in an industrial site in Deptford. Naturally. Speaking of gritty, Norman’s edgiest venture is Spuntino in Soho, a 20-seater, Brooklyn-inspired Depression-era diner, which specialises in calorie-rich dishes such as truffled egg on toast, pulled pork sliders, deep-fried olives and peanut butter and jelly sandwiches.

Mishkin’s in Covent Garden was another departure from the Polpo model. “We try to work with the landlords at each site and do something they are happy with.

The owner of the Mishkin’s site wouldn’t let us do another Polpo as the small plates-focused Opera Tavern is next door, so it wouldn’t have made sense,” he admits.

That three of Norman’s head chefs are women, including the impossibly glamourous Florence Knight of seasonally focused Polpetto, which reopened this month at its shiny new Berwick Street address, is no coincidence. “Kitchens are better places when they are run by women as they’re less frenetic and testosterone-fuelled. Restaurants with women chefs at the helm are more measured and thoughtful places, which fits with our ethos,” Norman offers.

Never one to rest on his laurels, in addition to his day job, Norman is currently working on a second cookbook following on from the success of his Polpo recipe book, which will shine a light on Spuntino. “If the Polpo cookbook was a love letter to Venice, then the Spuntino tome is a love letter to my favourite parts of New York,” he says. 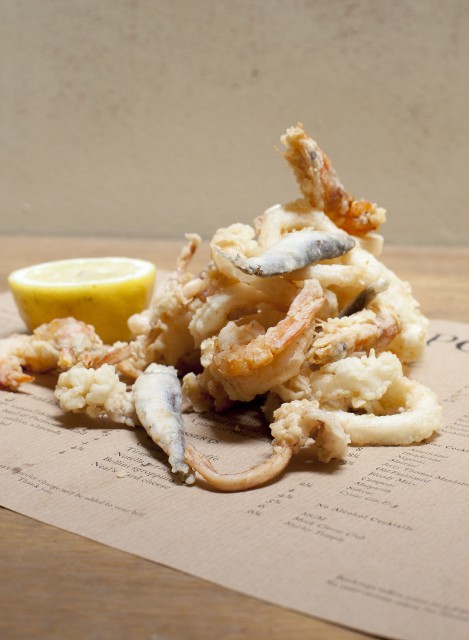 And if that wasn’t enough extra curricular activity, you’ll also find Norman on the box starring in a six-part TV series for BBC2 called The Restaurant Man, where he guides budding British restaurateurs with their fledgling start-ups.

With fingers in so many pies, Norman is unable to keep such a close eye on his seven sites. “In the past I’d do a Jason Atherton and visit them all every day, but I just don’t have the time to do that now,” he admits. The street pounding job has since fallen to Luke Bishop, managing director of Polpo Ltd.

Fascinatingly for someone so driven, Norman is seemingly devoid of a long-term game plan. Rather than working to a 10-year plan, he favours a fluid way of doing business, preferring to secure a site first and then come up with the concept. Posing the question of how large he wants his restaurant empire to become, he seems genuinely unsure.

“The opening of Polpo Notting Hill in May will take our Polpo tally to four, so we’ll have to see after that whether there is an appetite for more. We’re opening new places with the cash flow from our current sites at the moment, but is that a sustainable business model? I don’t know.

Everything we make goes back into the business, which is a risky strategy. “Making money is important to me but I certainly don’t want to sell up any time soon,” he insists, adding, “We’re moving forward with such momentum and there is still so much to prove. I’m fizzing with energy and ideas.”