A ghostly figure, reputedly the spirit of an executed man, has apparently been captured on CCTV at one of the UK’s oldest pubs – just before the camera blacked out. 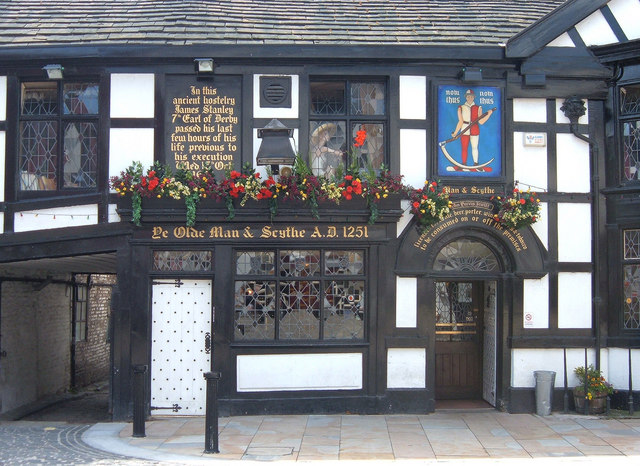 The spectre was apparently filmed on Valentine’s Day at Ye Olde Man and Scythe in Bolton, which is one of Britain’s oldest pubs dating back to 1251; although the current building is said to be a “newer” construction from 1636.

Landlord Tony Dooley discovered smashed glass on the floor when he came down on Friday morning but when he viewed the camera he found it had stopped recording shortly after 6.18am.

On watching the tape he was apparently shocked to see the outline of what looked like a man crossing into view and then standing at the end of the bar.

“We checked the footage and it revealed this figure,” he said, The Telegraph reported. “To be honest I was a bit concerned – I’m a bit of a sceptic when it comes to ghosts but you become more of a believer when you see things like that.”

The video recording can be seen here

The pub is said to be haunted by, among some 20 other spirits, a Royalist officer from the Civil War who is said to have spent his last night at Ye Olde Man before being executed the following morning.

Around and outside the pub a particularly gruesome massacre occurred in 1644 (also during the Civil War), when Royalists under Prince Rupert of the Rhine captured Bolton and put the Parliamentarian garrison and some of the population to the sword.

Some have said that the executed officer in question was James Stanley, 7th Earl of Derby, who was executed in Bolton in 1651, allegedly for playing a part in the massacre of ’44.

He was beheaded in the square immediately in front of the pub and the chair he sat in while awaiting his fate is still inside.

“There have always been rumours it is haunted and we’ve had psychic readings done here in the past,” said Dooley.

“Occasionally you hear things and wonder if it’s just the building settling down or whether it’s something else.

“It’s the fourth-oldest pub in Great Britain so it’s had its fair share of deaths and whatnot.”

Of the other ghosts Ye Olde Man and Scythe is said to be haunted by there is a phantom dog, a hanged woman and an eight-year-old girl.

For more spooky pub encounters have a look at db’s “Most Haunted Pubs” in the UK.