Argentine Malbec gives immediate pleasure and is bringing new drinkers into wine. But how does the country build on this without making the same mistakes made by other varieties that became brands? 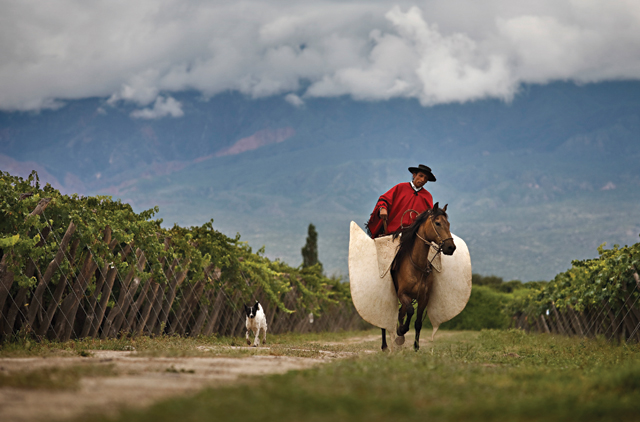 “MALBEC IS like pizza and sex. It doesn’t matter how bad it is, for some people it will still be ok,” Alessandro Marchesan, group sommelier and wine buyer for Roka and Zuma, recently tweeted. While the inky red can get a bad rap for being too reliable for its own good, no one can argue with the strength of “brand Malbec” in the UK, US, and increasingly, among the Brazil elite, who are latching onto Argentina’s top Malbecs in favour of Californian Cabernet.

Juicy, soft and generous, it’s easy to see why consumers have fallen for its violet- scented, velvety charms. The fact that the word “Malbec” is both easy to remember and pronounce coupled with its ability to consistently deliver immediate pleasure keeps consumers coming back for more and is helping to bring both Millennials and non-wine drinkers into the category.

So much so, that Argentina is currently the most popular wine country among the UK’s 24- to 35-year-olds with particularly strong sales of Argentine wine on the part of Millennial males.

• Argentina is currently the most popular wine country among the UK’s 24-35 year-olds with particularly strong sales among Millennial males.

• Soaring grape prices, increased labour costs and an overvalued peso are affecting Argentina’s ability to compete at the entry level of the wine market.

• In the last five years, shipments of Argentine Malbec to the US have more than doubled, from
1.9 million cases

• In a similar vein to the “Moscato madness” boom, in recent years, Malbec has put down roots in Chile, Australia, the US and New Zealand.

• Producers are planting at increasingly high altitudes, picking earlier and using less oak in order to achieve more balance and elegance in their Malbecs.

• The time has come for Argentina to begin exploring its micro-terroirs and communicating site specifics to consumers.

“Malbec’s consistent profile is a virtue, especially for people who don’t appreciate being surprised or challenged by a wine. The genre itself has become a brand,” says Eric Asimov, wine critic of The New York Times. Phil Crozier at Gaucho agrees: “Brand Malbec is ahead of the content at the moment. I have people coming into the restaurant asking for steak and Malbec without really knowing what a Malbec is.” Malbec was brought over to Argentina in the 19th century from Cahors in France (where it is known as Côt). In some respects, Argentina’s economic problems have been beneficial to its wine industry. Soaring grape prices, increased labour costs and an overvalued peso are affecting Argentina’s ability to compete at the entry level of the market, but this is no bad thing for the world’s fifth-largest wine producer. “Argentine wine is not cheap and that’s part of its success. The average UK retail price of a bottle of Malbec is relatively high, making it a perfect fit for the independent sector,” says Laurie Webster at specialist Argentine importer Las Bodegas, adding, “sales are still very ‘brand Malbec’ driven rather than producer led at the moment”.

In the last five years, shipments of Argentine Malbec to the US have more than doubled, from 1.9 million cases in 2008 to four million in 2013, according to the latest figures from Wines of Argentina. What’s more, the country’s top Malbec blends now top US$100 a bottle, from Paul Hobbs’ Viña Cobos Malbec and Catena Zapata’s Estiba Reservada to Luigi Bosca’s Icono and Dominio del Plata’s Nosotros. Compared with top Napa Cabernet, Argentina’s best Malbecs are seen to represent good value and, while Argentine Malbec is gradually evolving into a fresher, more elegant beast, there is still a market for its blockbuster wines. 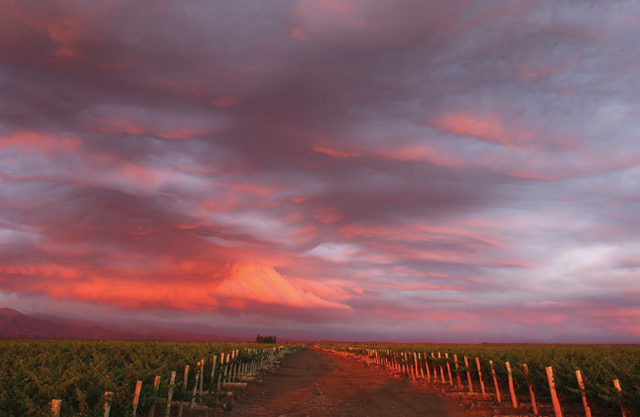 “Local investors in Argentina and Brazil are the main engines at the moment,” says US winemaker and consultant Paul Hobbs of Viña Cobos, adding, “Wealthy Brazilians would prefer to spend their money on high-end Malbec rather than top Bordeaux – the shift happened a few years ago, it’s a nationalistic thing.”

Back in Britain, Webster of Las Bodegas believes people are starting to wake up to investing in Argentine fine wine. “It’s rooted more in private collecting rather than investing at the moment but Brits are buying up the top Malbec blends from Catena, Achaval Ferrer and Dominio del Plata and storing them in bond around the country,” he says. While Crozier is buying up some of the country’s finest wines in bond to conduct an ageing experiment, he believes Malbec’s beauty lies in its ability to deliver immediate enjoyment. “I like the freshness and florality of young Malbec. The majority of producers aren’t making Malbecs to lie down. They tend to have a lifespan of six to eight years and show best after about three,” he offers. Malbec is by far the most widely planted variety in Argentina, with its 34,000 hectares nearly double that of second place Bonarda. Consequently, it has developed an identity in Argentina similar to Côt in Cahors, delivering power, concentration, structure, acidity, and, increasingly, elegance.

In a similar vein to the “Moscato madness” boom, in recent years, Malbec has put down roots in Chile, Australia, the US and New Zealand, with other countries keen to sample a slice of Malbec’s success. Having traditionally made black cherry-flavoured blockbusters generously licked with American oak to please US palates, as a new generation of winemakers rises up through the ranks, freshness is now the focus. Producers are planting at increasingly high altitudes, picking earlier and using less oak to achieve more balance and elegance in their Malbecs. 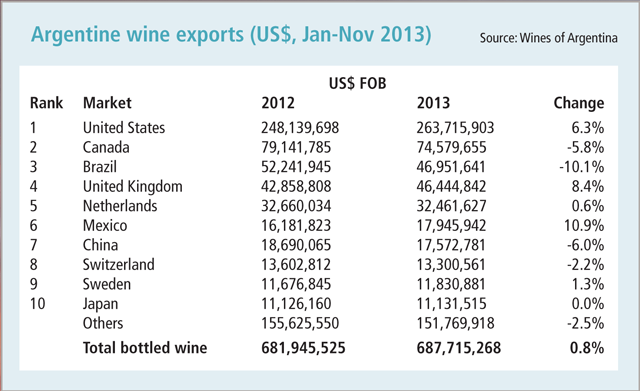 Hobbs believes the UK is “driving the argument for elegance” in Argentina and has had a “balancing effect” on its wines. “US palates are more sophisticated now too – gobs of fruit are out of fashion. And if Argentine producers want to succeed in Europe and China they are going to have to turn the power down and refine their offerings or they won’t see growth,” Hobbs warns. A shift towards elegance has also come due to a growing confidence from Argentina’s more established winemakers, who no longer need their hands held by consultants. “Producers were making wines to please American palates, but the trend is reversing as they become more confident about making wines with higher acidity and less dependence on oak,” says Christian Rothhardt of boutique Argentine wine importer Ruta 40.

Webster of Las Bodegas agrees: “There’s an overwhelming movement towards fresher styles, which is linked to higher altitude areas. Boutique producers like Riglos are leading the way with a style that’s a lot more elegant, structured and food friendly,” he says.

While looking to Marlborough Sauvignon Blanc as a model for keeping consumers consistently happy and prices high, Argentina needs to avoid putting all its eggs into one basket, as it could prove a risky strategy if supply starts to outstrip demand.

“The possibility that Argentine Malbec could become a commodity is a concern. Consumers always want the lowest price, which leads UK supermarkets and US big buyers like Costco to drive prices down. There are always people willing to supply this demand and unless we diversify and strengthen our upper tier, we could be in trouble,” says Hobbs. Thus, the time has come for Argentina to begin exploring its micro-terroirs and communicating site specifics.

“Argentina’s fine wine future lies in small production wines from well mapped out terroirs – it’s time to get the quality message across to consumers,” says Rafael Calderón, chief executive of Riglos. Juan Pelizzatti, co-owner of Chakana in Lujan de Cuyo, echoes Calderon’s sentiments: “The Argentine wine industry is getting to the point where it’s ready to produce its most interesting results. We need to talk regionality in order to promote Argentina on a higher quality level – it’s not good to be perceived as an ocean of Malbec,” he says. Pelizzatti has been busy terroir mapping with soil expert Pedro Parra to seek out the best areas to plant Malbec at high altitude, and believes Altamira in Mendoza’s Uco Valley is the best chance Argentina has to talk terroir. “The soils in Altamira contain calcium carbonate so there’s a lovely mineral element to the wines,” he says.

Sebastian Zuccardi, who recently became responsible for all of the wines in the Familia Zuccardi portfolio, agrees with Pelizzatti that Altamira holds great promise for Argentina: “We need to stop trying to sell Malbec as a commodity. The terroir differences are huge between the regions – I believe Gualtallary and Altamira are the best sub-regions in Mendoza for Malbec due to the minerality their chalky soils impart in the wines,” he says. Rothhardt, meanwhile, believes story telling is key to engaging consumers about terroir. “I’m trying to teach our customers about the terroir differences across Argentina and push the regionality message as it’s an important story to tell. I’m never sure how much of it sticks, but it’s crucial that we do it.”

With a new and enthused troupe of winemakers emerging on the scene, Argentina’s wine future is incredibly bright. There’s a genuine sense of camaraderie in Mendoza, with established wineries renting tank space to
emerging winemakers seeking international acclaim. But while they continue to fine-tune their Malbec offerings, they also need to prove that the country is more than just a one-trick pony. 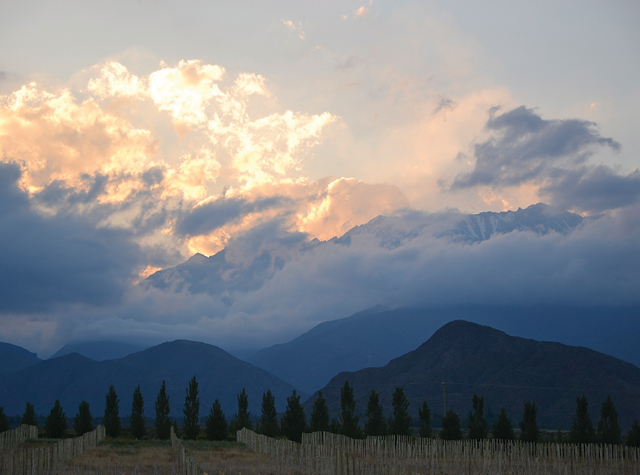 Zuccardi is doing much to dispel this myth via his regional Bonarda blend Emma, named after his grandmother, and a blanc de blancs traditional method sparkler that spends five years on its lees. His friend and fellow trailblazer Alejandro Vigil, chief winemaker at Catena Zapata, is doing the same by flying the flag for Cabernet Franc, which he believes is “the future” for Argentina, in two single vineyard offerings, while plantings of Petit Verdot among the country’s more cavalier estates are on the rise and Cabernet Sauvignon is being shown increasing care and attention.

Crozier is optimistic about what lies ahead for Argentina: “A new generation of winemakers spearheaded by Zuccardi, Vigil and Matias Michelini of Passionate Wine are shaping the future. Having learnt from the likes of Daniel Pi and Roberto de la Mota, they are throwing themselves into what they do with astounding energy and fearlessness,” he enthuses. Argentina, it seems, is just scratching the surface of its potential.