Wine and warfare part 7: the vivandières

Women have often accompanied men to war and military camps through the centuries could be a bawdy mix of wives and harlots not far removed from a quasi nomadic rabble or perhaps a travelling circus.

One French officer complained that during the Peninsular War while the British had an army, the French had “a brothel” – Wellington disliked having women on campaign and only a very few were granted permission to join their lovers on the march; though many more came over anyway.

There were some practical reasons for not having women on the road. Camp followers were sometimes referred to as “useless mouths” as they were a burden on supplies, the presence of women could also lead to arguments; the swashbuckling hussar Antoine Lasalle fought a duel with a brother office while in Spain when the latter caught the general in bed with his wife (Lasalle let the man live. He was recalled the following year and killed on the Danube campaign).

There was also the fear that women in the camp of a defeated army would become “spoils of war” to be raped/killed/carried off into captivity etc as the victor saw fit – something which happened depressingly frequently.

The place of women in battle is debated to this day. Some societies had no problem with women fighting, others were less keen on women bearing arms but that didn’t mean they couldn’t serve in some way.

Some women of course actively sought to become soldiers while some became warriors by accident, whichever way round it was the likes of the Amazons, Joan of Arc, Augustina of Zaragoza and Molly Pitcher ring down through military history and legend.

However, not all women could or did rise to such prominence and there were a much greater number of unnamed heroines who served in their own way alongside the men.

Foremost among these were the vivandières or cantinères as they were known who eventually became one of the defining icons of the French military.

Although military artists and historians love to focus on heroic charges, battles against the odds and bright uniforms, the key to a successful campaign is the frighteningly mundane task of supplies and logistics to ensure one is capable of keeping an army in the field in the first place.

Even as recently as the Second World War, armies relied on long, winding supply trains that stretched for miles behind the lead units while others (the revolutionary armies of France in particular or the English chevauchées of the Hundred Years War) lived off the land and local populace by foraging, requisitioning or just out and out theft.

Following the armies would also be small businesses or officially licensed “sutlers” or “vivandiers” from which soldiers could buy tobacco, food and drink in camp and on the march – whenever they had money. Out of this enterprising idea came the vivandières, usually the daughters or wives of the sutlers, who became the most well-known faces of women on campaign. 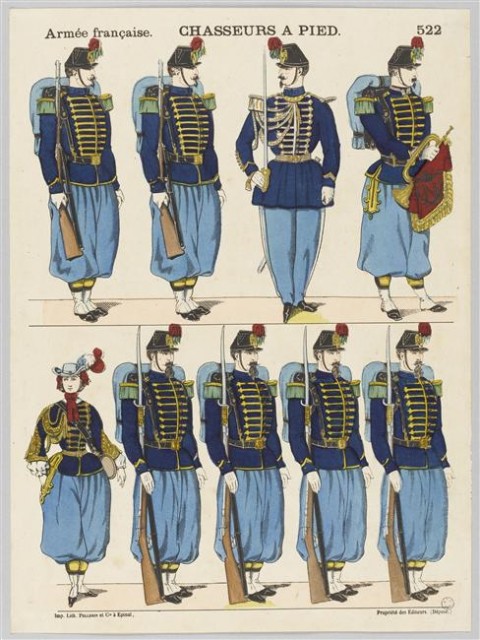 By the time of the Napoleonic Wars and even more so during the wars of Napoleon III, the vivandières were attached to specific units and even wore a feminised version of its uniform (above).

They famously carried a small barrel (the tonnelet) at their hip full of brandy and were often seen serving soldiers in the thick of the fight itself (free of charge, see below).

They also acted as fore-runners of the later nursing corps not only would they give wounded men a shot of liquor but they might also take them back to the nearest aid station – some women camp followers in those times were more than capable of slinging a wounded man on their back and carrying them to safety and then heading back into the fray to repeat the feat.

Later popular imaginings always portray vivandières as fresh-faced beauties and while many were true roses among thorns, the great majority were more likely to be every bit as scarred, hoary, weather-beaten and foul-mouthed as the men.

Life on campaign was hard, you were outdoor in all weathers, often without basic comforts or indeed supplies and one walked the entire distance. There were no trains to transport Napoleon’s army to Moscow, the soldiers and their vivandières would have walked the entire distance from Germany to Russia and (if they survived) back, well over 1,000 miles in each direction and that was just in one year.

At a (very) conservative estimate, a soldier who served in and survived all of Napoleon’s campaigns between 1805 and 1815 would have marched across Europe to the tune of over 8,000 miles probably closer to more than 10,000.

So women marching with them were tough, physically brave and many were killed in action which often caused great distress to the troops who looked on their vivandières as cherished members of the regiment and loved them for their bravery, selflessness and generosity.

Unsurprisingly, it was common for vivandières to marry a soldier from their regiment – who was considered very lucky indeed by his comrades.

They served in every campaign of the Napoleonic Wars, in the conquest of Algeria, the Crimean War, Franco-Austrian War, the French intervention in Mexico, the colonisation of Cochinchina (Vietnam) and the Franco-Prussian War.

Vivandières weren’t unique to the French armies either, the US army in particular took much of its inspiration from the French Second Empire and vivandières were a common sight in both Union and Confederate camps during the Civil War.

Similarly, versions of vivandières, usually inspired by the French example, were to be found in the Spanish, Swiss, Italian, some German and South American armies, where they gained a similar reputation for heroism.

Vivandières captured the public imagination during the 19th century, especially in France – and they were the subject of postcards, plays, musicals and operas – the most well known of which is probably Donizetti’s highly romanticised La fille du régiment, while a chorus of them turn up in Verdi’s La forza del destino.

The French began to phase vivandières out of front line units during the late 1870s but that did not mean that women stopped serving wine to the troops.

When out of the front line during the First World War, French soldiers would descend on the nearest tavern where they could get a glass of wine and catch sight of a pretty face.

The waitresses of these taverns took on the role of the vivandières and looked on the soldiers who passed through as their “boys”.

The relationship between them and the soldiers is best summed up by one of the most famous French marching songs, “Quand Madelon”.

“When Madelon comes to us to serve a drink…” goes the chorus, “we tug at her skirt and each one of us tells her a story.”

With the subject being troops flirting with a pretty waitress, the song’s lyrics are actually very clean for one meant to be sung by grizzled troops, are they overly bowdlerised? Perhaps and no doubt ruder versions existed although as with the bond formed between men in warfare a soldier’s desire for female company can go beyond purely sexual desire.

The need for simple affection and thinking of life beyond the war is extremely prevalent among soldiers and besides, Madelon proves quite capable of looking out for herself as well, deftly brushing aside the amorous advances of smitten soldiery.

Even though a love-struck corporal does in final verse beg her for her hand in marriage, Madelon quickly reminds him of more important matters. Laughing she asks him for it back as, “your friends are coming and I need it to serve their wine!”

The full song can be heard here

Next time: the use of alcohol in battlefield medicine – and why you’d want it!