There is a corner of Europe between the Vosges Mountains and the Channel/North Sea that is sometimes known as the “Fatal Avenue”.

Running largely through northern France and the Low Countries it provides the flattest and easiest route for armies invading in or out of France and is probably one of the most blood-soaked and fought-over regions anywhere in the world let alone Europe.

Readers of this series so far will no doubt have been struck by the number of times northern France and the Low Countries have appeared in the narrative (and will yet again).

One of the chief victims of these marching and counter-marching legions is Champagne, which has rather unwisely positioned itself slap bang on the route of march for armies from the Huns (turned back at Châlons in 451AD) to the Allies as they pushed the Germans back to the Rhine in 1944/45.

Poor old Hautvilliers has been sacked at least seven times by military (mis)adventure, the final time being by French revolutionaries who destroyed the monastery and its gardens and only left the famous church standing; so well known to visitors today.

Napoleon fought arguably his greatest campaign there exactly 200 years ago, flitting nimbly hither and thither with his poorly equipped army, inflicting stinging defeats on the encroaching Prussians, Russians and Austrians (including Blücher’s army last seen crossing the Rhine through the vineyards of the Rheingau).

There were battles at Reims, Brienne and through the flat expanses of southern Champagne and the vineyards of the Aube and the Côte de Sezanne as Napoleon conducted his fighting retreat.

Nonetheless the allied armies occupied and ransacked the cellars of the great maisons as they marched on Paris – their emperors stopping by at Moët & Chandon to toast Napoleon’s downfall in the garden so the story goes.

During the First World War the 1914 vintage (one of the greatest) was partially harvested under fire from German artillery which also badly damaged Reims cathedral, the scars of which even inside the great basilica are visible to this day as are the scars of shell fragments on the buildings around Epernay for those who care to look.

It is said that the front line during the First World War never got beyond Reims because the soldiers would not see the vineyards overrun by, “les boches”, while the cellars became shelters for civilians as well as aid stations and hospitals for the soldiers.

Regular visitors to Champagne will no doubt have seen plenty of names carved into the soft chalk walls of the crayères, in one cellar alone the author once found graffiti from French soldiers in 1915 (pictured above) and around the corner one from an American in 1944.

It may seem trite to less sentimental Anglo-Saxon ears but French soldiers throughout history have been spurred on with the thought of defending the sacred soil of France.

The use of wine in propaganda during the First World War has already been examined, the French equating wine with civilisation in the face of beer-swilling German savages.

If one delves into Shakespeare, it was evidently not the first time that France had resorted to such a parallel in the face of invasion.

When, in act V of Henry V, the Constable of France, Charles d’Albret, exhorts the French king to meet Hal in battle he claims that not to do so would bring such dishonour they would forfeit their right to call themselves civilised and be unworthy to tend their vines any longer.

“And if he be not fought withal, my lord,
Let us not live in France; let us quit all
And give our vineyards to a barbarous people.”

There is a potential reference too to wine as a “combat motivator”, again already looked at in “Dutch Courage“, as well as a healthy and nourishing drink in its own right. After many oaths d’Albret continues:

“Dieu de batailles! where have they this mettle?
Is not their climate foggy, raw and dull,
On whom, as in despite, the sun looks pale,
Killing their fruit with frowns? Can sodden water,
A drench for sur-rein’d jades, their barley-broth,
Decoct their cold blood to such valiant heat?
And shall our quick blood, spirited with wine,
Seem frosty?”

Somewhat ironically, in 1415 the Kings of England were the overlords of Bordeaux, Gascony and a lot of the Loire, while the Duke of Burgundy, John the Fearless (son of Philip), a somewhat overmighty subject, had control over the Côte d’Or.

All of which meant that the only vineyards of note owned by the French king were those of Champagne and the Rhône and even the latter technically belonged to his son, the Dauphin (Dolphin in French after the use of a dolphin in their coat of arms) who ruled from Vienne, hence the Dauphiné as the Hautes-Alpes is sometimes known and also the reason the dolphin motif is used by the major co-ops of the region today.

The English would gradually be driven from France, Jean d’Arc bringing Charles VII to be crowned in Reims Cathedral in 1429 and leading his armies into the Loire.

The English though would not be ousted from Bordeaux until 1453 with the Battle of Castillon. Fought in the modern Côtes de Castillon east of the city, the English commander Sir John Talbot, the old Earl of Shrewsbury, bravely but foolishly attacked the French cannons and was killed and his army routed, ending England’s occupation of French soil (save Calais) for evermore – though not by any means ending a taste for the wines.

Sadly, though the French considered the unsophisticated English as barbarians in the Middle Ages they were as nothing compared to the barbarism France and its vineyards were subjected to in 1940.

The story of France’s occupation during the Second World War, the pillaging of the great cellars, the wit and guile of the vignerons in denying the occupying forces their wine (Moët’s Comte Robert-Jean de Vogüé was sent to a concentration camp for the effort) as well as the heroism of those who fought in the Free French forces or the Resistance has been ably recounted in Wine and War: The French, the Nazis, and the Battle for France’s Greatest Treasure by Donald and Petie Kaldstrup.

There is however one story, which, partly by virtue of its humour but also because of the way it demonstrates the impact of viticulture on the French psyche as a whole, deserves to be told.

Napoleon famously remarked that an army marches on its stomach and the French clearly plan their campaigns around them too. 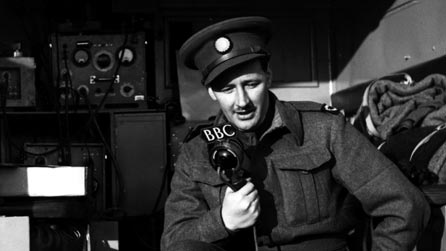 The BBC war correspondent and author, Wynford “Vineyard” Vaughan-Thomas (pictured), remembers in his book, How I Liberated Burgundy: And Other Vinous Adventures, a crucial juncture during the advance of the French First Army in 1944.

“There came a moment,” he recounts, “when the French Army paused and I remember dear general Alexander Patch saying to me, ‘Mr Thomas, you know a little bit more about the French. Why aren’t they advancing?’

“I looked at the map, and realised we were at the beginning of the Burgundy vineyard country. They were studying it because it would be tragic if they fought through the great vineyards of Burgundy – France would never forgive them and they paused.

“Then, a young sous-lieuteant arrived and said, ‘Courage, my generals – I’ve found the weak spots of the German defences: every one is in a vineyard of inferior quality.’ The general made up his mind, ‘j’attaque!’ and for three days we fought through the cellars and I emerged on the other side and found we had liberated Burgundy.”

The way it is related, readers may be forgiven for thinking that Vaughan-Thomas had done a little “liberating” of his own during the battle for Burgundy, and indeed he does say that as the French moved on: “I must admit that, at this point, I lost touch with the advance elements of the French army. A sound military maxim teaches the enlightened warrior that his first duty after victory is to make sure of his base.

“Accordingly I disappeared into the cellars of Beaune and Nuits-Saint-George to make certain that our objectives remained undamaged.”

Vaughan-Thomas was fortunate to advance with various American, British and Free French forces up through Italy, the Rhône and Burgundy during the war years and his splendid little book should be more widely read.

After liberation, the precious stocks hidden away during the long years of occupation were brought once more into the light and the advancing Allies found their arms and bivouacs filled with fabulous wines from a (usually) grateful population.

As if to prove (to paraphrase de Gaulle) that France is wine and wine is France, to stamp out any lingering doubt of the resilience of vineyards and the culture of European wine drinking; look no further than the 1945 vintage.

One of the greatest vintages in the world, born at the end of mankind’s most destructive conflict. A vintage of victory and (let us hope) peace.

Next time: Divine wind – ritual drinking before battle in the world of the samurai.