Auctioneers Hart Davis Hart is to auction 10,000 bottles from the cellar of the late Herbert Bridges Harris Jr in Chicago next month. 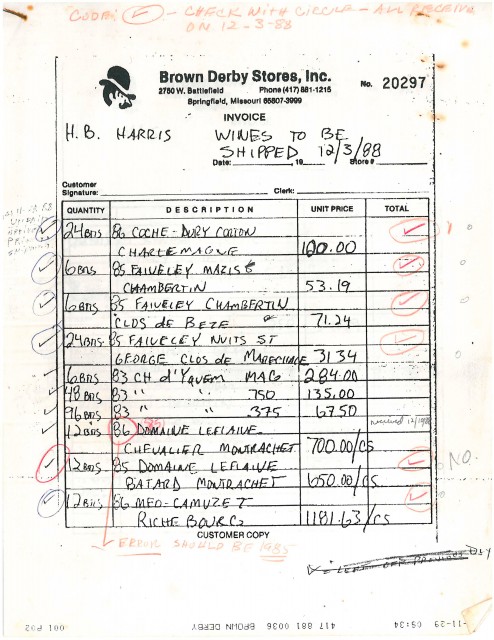 The collection includes “an impressive assortment of the greatest and rarest Burgundy, Bordeaux and Champagne of the 20th century” and say it may be one of the last intact cellars of its era.

As a collector and wine merchant in the 1970s, Harris amassed a collection with “spectacular” provenance, nearly all bought en primeur or on release and then stored initially in his cellar and then in professional storage for the last 19 years.

Hart Davis Hart’s specialists described the cellar as being like a “time capsule” with cases of DRC, Leroy, Ponsot, Drouhin, Comtes Lafon and Leflaive in quantities which are “all but impossible to attain today.”

John Hart, chairman of the auction house, said: “This is perhaps one of the finest and rarest collections ever to have come on the market. We simply don’t see cellars of this caliber and provenance in the auction world today.”

Also to be shown at the sale are the original receipts of purchase for nearly every bottle (one pictured).

Some highlights of the sale include 1976 DRC Montrachet, 1975 Château Latour-à-Pomerol, two Methuselah of 1976 La Tâche and one of Richebourg (all DRC), 1974 Pétrus, a collection of 1978 Bordeaux including Lafite, Cos d’Estournel and Margaux and magnums of 1979 Cristal.

The sale will take place on 8 February at TRU restaurant in Chicago.