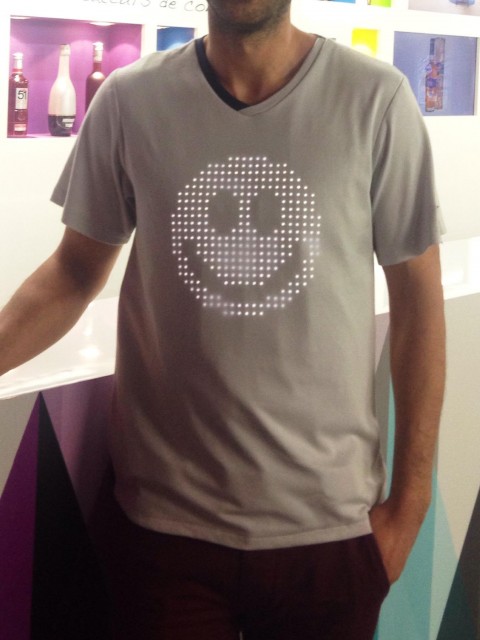 The tshirtOS 2.0 was revealed to a global audience at the Pernod Ricard Innovation Day in Paris yesterday with its creators predicting that “wearable technology” will be a key trend in 2014.

The t-shirt features an illuminated LED blank canvas allowing wearers to create their own designs and express their thoughts encouraging wearers to show the world the “true you” – in keeping with the Scotch whisky brand’s slogan “Stay True”.

Created by “wearable technology experts” SWITCH – a San Francisco-based fashion technology company – the t-shirt is accompanied by a mobile app which allows wearers to control the display via their phone.

Peter Moore, global brand director for Ballantine’s, said: “tshirtOS 2.0 represents a truly innovative way for consumers to express themselves and answer Ballantine’s invitation to ‘Stay True’, by literally creating and then wearing an expression of themselves on their chest.

“Wearable technology is going to be one of the key trends of 2014, and we can’t wait to give Ballantine’s fans around the world the chance to see and experience tshirtOS 2.0 for themselves.”

Alison Lewis, Founder of SWITCH and co-creator of tshirtOS 2.0, added: “tshirtOS 2.0 is a whole new way for people to create, share and express themselves through fashion. It’s soft, feels great on and is completely undetectable as technology.

“We are very pleased to be working with Ballantine’s on such a magical and inspirational product.”

Twenty of the shirts have been been manufactured and will be showcased in key Ballantine’s markets around the world in the coming months.

Ballantine’s sells more than 70 million bottles of scotch whisky a year making it the world’s no 2 whisky by volume.